Skip to main content
Reminder Our Weekend Warm-up Podcast is live and also has the Preview of Bayern Munich va. Wolfsburg included! Click to listen to it on Spotify!

The Senegalese forward didn’t bag a goal, but was influential nonetheless.

Bayern Munich notched their Champions League win over Inter Milan, and new forward signing Sadio Mané was once again not on the scoresheet. Have the German record champions made a hash of their transfer window after Robert Lewandowski’s FC Barcelona departure? Not so fast — Mané is hugely important to the team and a neat fit for head coach Julian Nagelsmann’s footballing philosophy.

Let’s dive briefly into the match highlights against Inter for a Sadio Mané appreciation post.

Mané is a center-back magnet

Against Inter’s 5-3-2 defensive shell, Mané typically drew multiple defenders with his movement. He used this to good effect by drifting or feinting short to clear space in behind the line. Thomas Müller himself is occupying two defenders, leaving Kingsley Coman the most free to be sent in behind.

Joshua Kimmich tries the shot here, but the movement has fashioned options at either post, with two of the center-backs following Mané high. This would be one of the moments Leroy Sané throws his arm in the air after the play, letting Kimmich know where he might’ve gone instead.

Minutes after that, Mané is at it again — dragging not two but three of Inter’s back-line into his gravitational orbit. Mané’s run is threatening and direct on goal, but Leroy Sané’s pass is aimed behind him — clearly the intent. As Mané drops back to collect, he’s able to lay it on a platter for the lurking Müller. 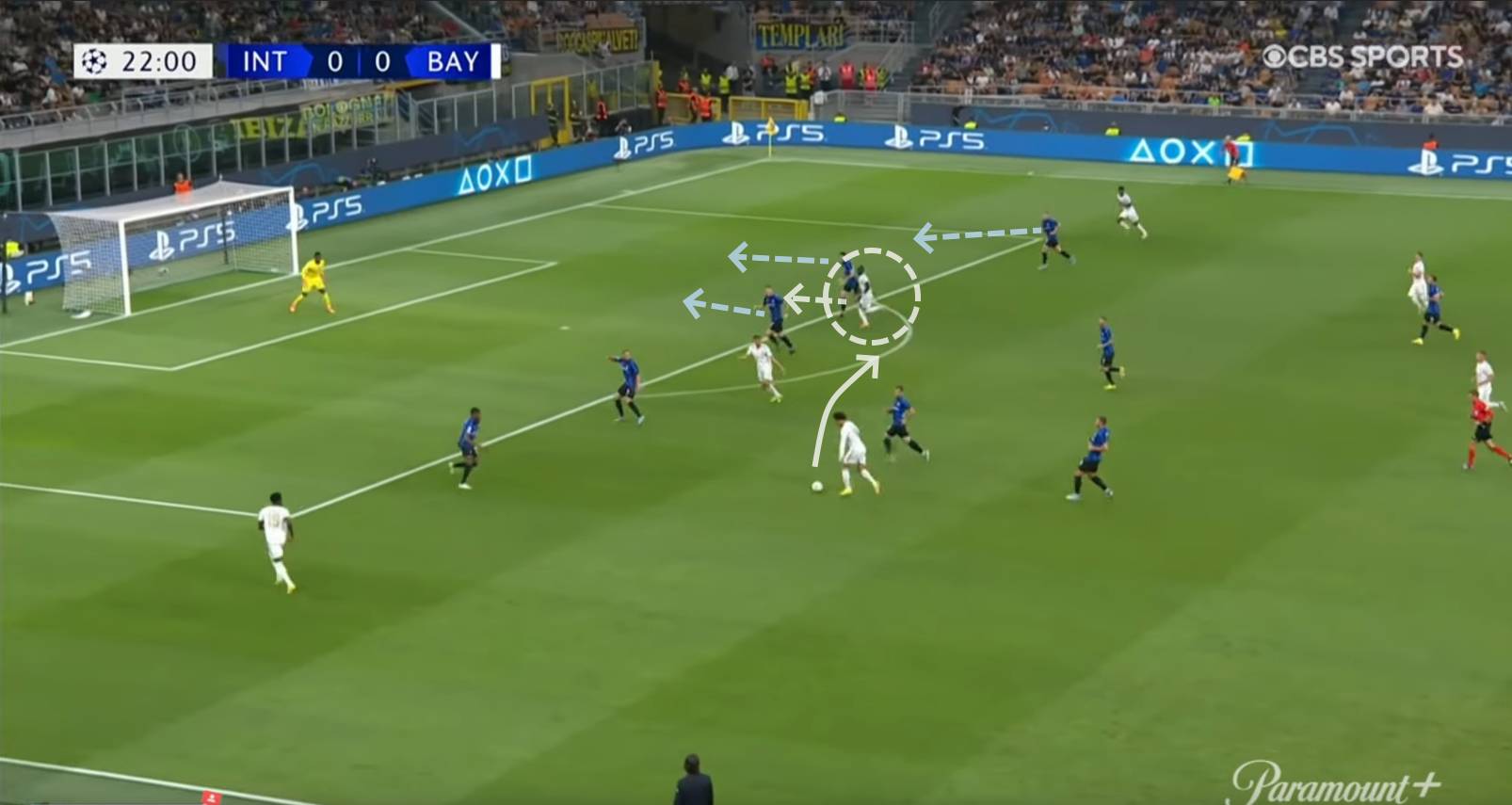 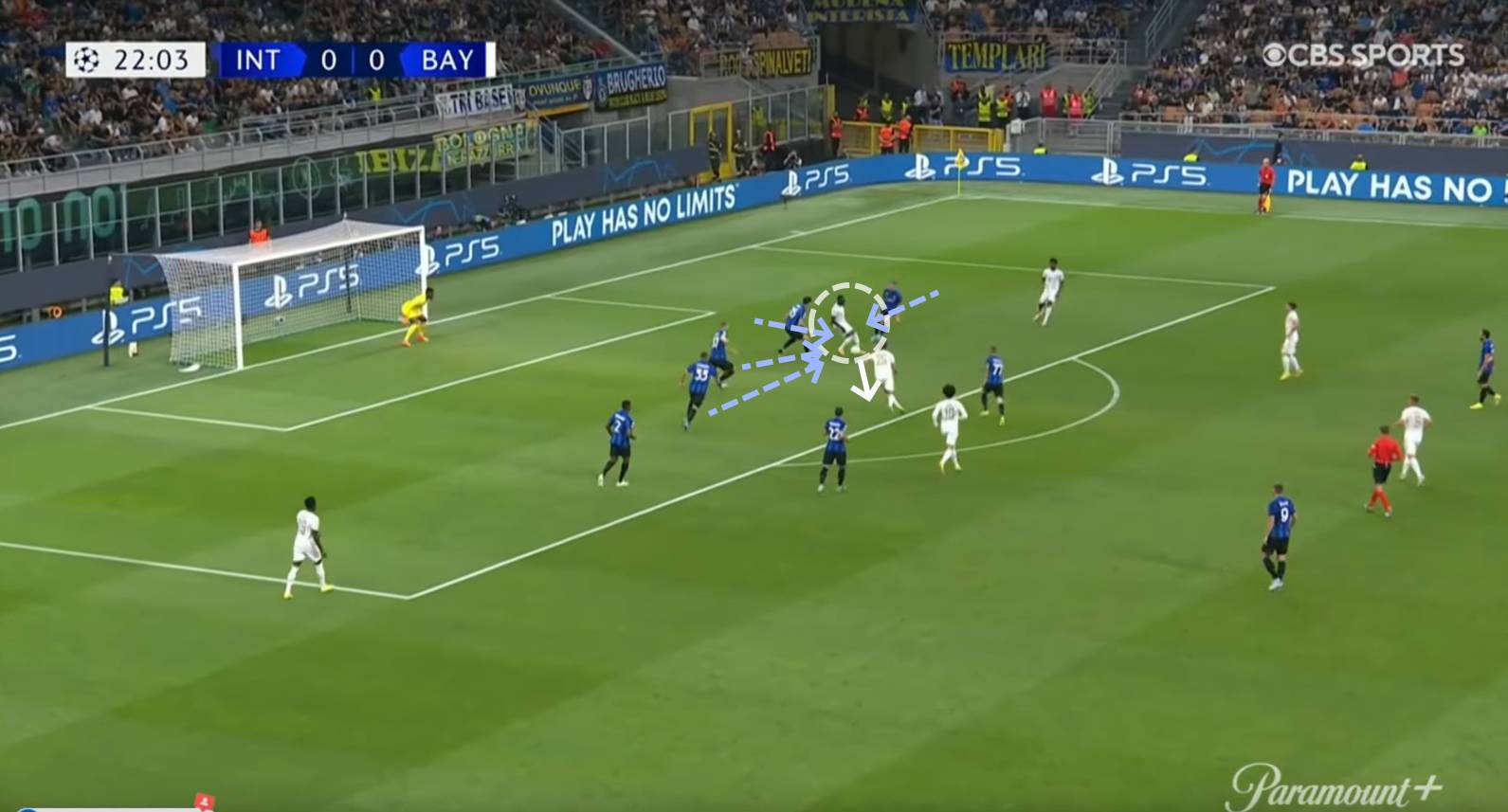 Fashioning a chance for the ol’ shadow striker.

It’s one of the Raumdeuter’s many good looks on goal, though he doesn’t strike it entirely cleanly.

The sprint fake and the goal

Kimmich’s gorgeous long pass that broke the deadlock was also made by Mané’s movement. Bayern’s team shape already has Inter at sixes and sevens. Where’s the back five? Right-sided center-back Danil D’Ambrosio, #33, is the man at whom Mané is charging — but it’s only for a second.

See 3:40 in the highlights. The Bayern forward pulls up from his fake sprint to sit in the pocket, freezing D’Ambrosio, who is caught between two minds: continue his back-tracking run towards the left, or recover to prevent Mané from collecting in the hole? As it turns out, either option would suit Bayern, as any choice between the two, or none at all, cleared space for Sané to burst forward — and claim the goal that powered his MOTM performance.

It’s subtle but intelligent play. A pacey forward’s instinct might be to run in on goal himself, and after all, aren’t more players in the box all the merrier? But Mané knows the score: there isn’t even another center-back behind him, only right wing-back Denzel Dumfries (#2), and the play is exclusively to tee up Sané and Davies.

Bayern would try the same thing before the half was over. Again it’s Kimmich distributing from deep, Mané floating into the playmaker’s spot, and Sané charging through the gap — though now it’s closer to goal with less room over the top.

This time the ball comes to Mané, and he turns crisply to feed Davies beyond the overworked Dumfries. Another excellent shot to ask a reaction save of the agile André Onana.

A conundrum in trying to follow Julian Nagelsmann’s constantly adapting — but not wholesale changing — tactics is how to account them. The numbers don’t really matter, but they help us have a general sense. Perhaps the best way to think of it, then, is simply as a 4-2-4: there’s a back four, a flexible midfield composition, and a fluid front four. How Bayern build-up from this core delineation of lines varies by matchup, even within a game.

Against Inter Bayern’s pressing structure started as a 4-2-3-1, but our focus right now will be in possession. Here, Bayern continued to show the 2-3-5 shape they often have this year, but with a seamless swapping of personnel we haven’t seen — namely, right-sided central mid Marcel Sabitzer pushing into the forward line, with the left winger Sané dropping to the midfield line.

In previous games, for example, it was Marcel Sabitzer or even Alphonso Davies in the left-sided midfield spot occupied above by Leroy Sané — and Jamal Musiala, more an in-the-box threat than a creator like Sané, would typically be in the front line.

However, Bayern also reverted to a look favored by Nagelsmann in the 2021/22 season. Right-back Pavard is the key to this; when he pushes into midfield, it’s two at the back but he is an extra outlet in build-up. When he stays back, Bayern falls into the 3+1 base shape we saw frequently last year:

In this shape, Kimmich is the lone outlet for the three-man backline and the passing triangles available at the base nullify Inter’s front two press easily. His midfield partner is more advanced — and helps Bayern transition into a 2-3-5 by building along the right flank, if need be. But the real intent is to get vertical quickly, with Kimmich’s world-class distribution quality employed to full effect to launch long passes, or line-breaking through balls.

This is where we got the pattern for the first goal — Mané dropping deep into the 10 position to enable the bombarding runs on the left. In fact, the screenshot is immediately preceding Kimmich’s assist.

A striker dropping deep isn’t a new thing in football nor for Bayern, to be sure. Not even for Mané — who blossomed in this role in his final year at Liverpool FC.

But Mané’s pace, intelligence, and willingness to embrace his off-the-ball duties without complaint is key to everything Bayern are doing. He’s an important player for Bayern when he’s scoring goals and when he’s not — and should be appreciated as such.

Interested in more analysis of the game? Why not check out our postgame podcast? Listen to it below or at this link.

As always, we appreciate all the support!