Julian Nagelsmann appears to be making a calculated trade-off in balancing attacking verve and defensive solidity.

Share All sharing options for: Narrow-minded? Why Bayern Munich’s attack is shunning width

When Bayern Munich smashed five goals past RB Leipzig in the DFL-Supercup to open the 2022/23 season, one might have been forgiven for thinking no defense in the world had any chance of containing the German Rekordmeister. Indeed, Europa League champions Eintracht Frankfurt were next put to the sword, 6-1, but since then more modest outputs have been the norm, with teams from Union Berlin to VfB Stuttgart compacting space and nicking points off the Bavarians. Has Julian Nagelsmann’s narrow attacking scheme been figured out?

First, let’s define what we mean by “narrow” — since the formation itself hasn’t always been. Bayern’s 4-2-2-2 have featured a variety of looks in their front four, with both dual tens and more traditional wingers. However, the ultimate pattern of chance generation remains consistently narrow, as a wonderful visualization from Tifo’s breakdown of the Bayern-Barça Champions League game this past week reveals:

Nagelsmann’s Bayern does not often create from wide positions, and even in a game like the Barcelona match — where Bayern deployed Sadio Mané and Leroy Sané on the wings — the choice seems more reactive and defensive. In that case, Barcelona do create from wide, with outstanding wingers in Ousmane Dembelé and Raphinha; Bayern’s extra pace on the wings doubled them up and enabled a more effective 4-4-2 structure in defense.

Without Robert Lewandowski in Bavarian red, it might make less sense to simply spam crosses. On the other hand, Sadio Mané and Thomas Müller are capable aerial threats and pulling the defense apart might make sense, right? Yet even when Bayern achieved greater spacing in the Barça lines, they still attacked right up the center. Hansi Flick would never. 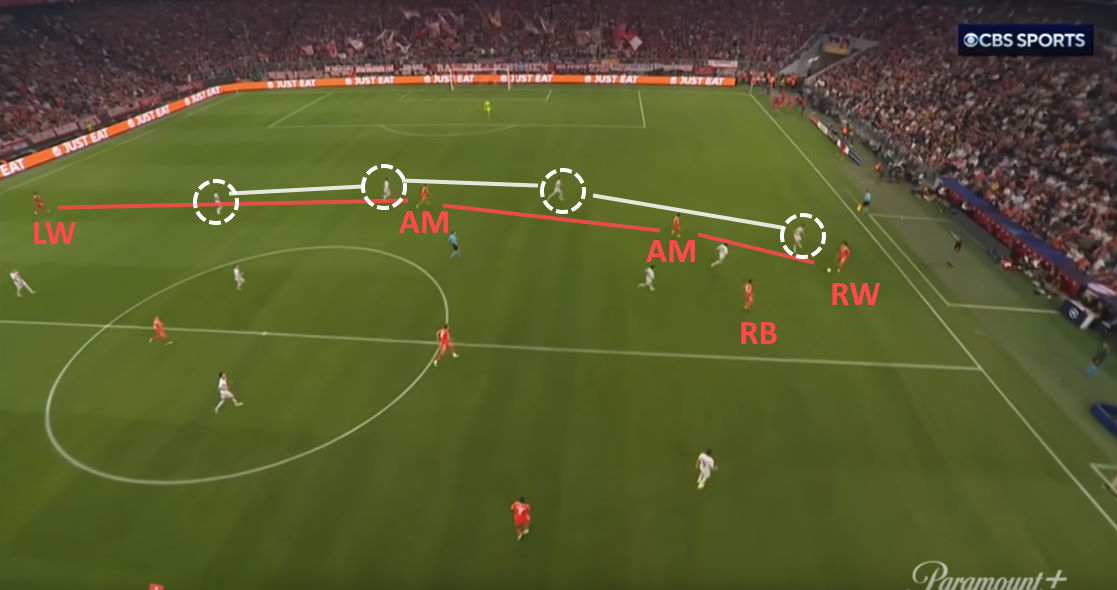 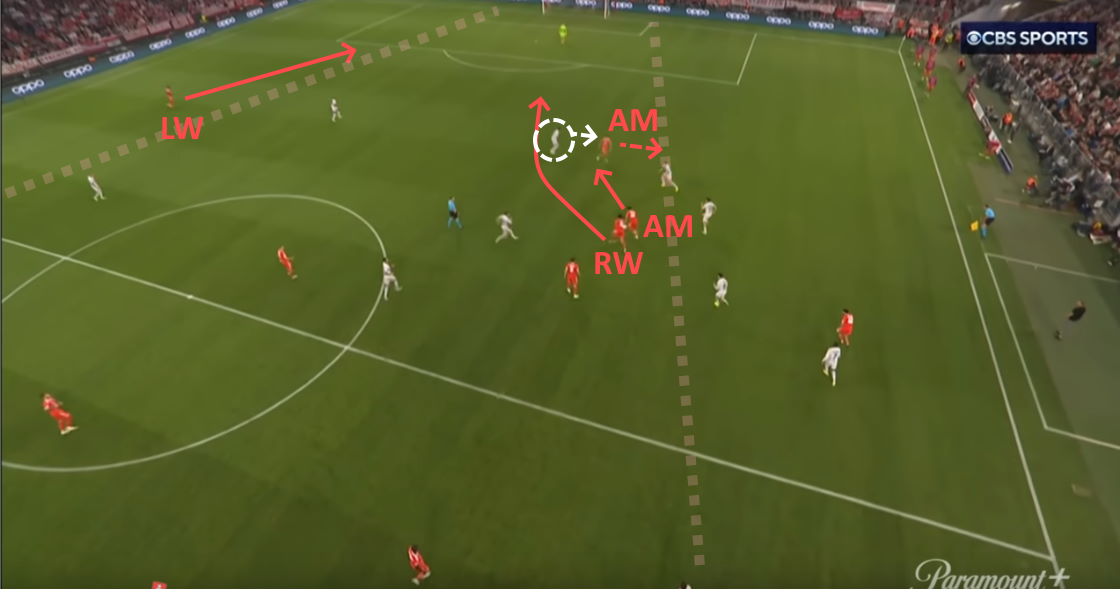 The build-up to Leroy Sané’s goal against FC Barcelona. Bayern’s attackers are centrally geared; Thomas Müller (AM)’s movement wide is only to drag out a center-back. | CBS/Paramount+

Why? It comes down to Julian Nagelsmann’s emphasis on risk aversion and defensive structure. He’s not an outright defensive-minded coach — if anything, the opposite. But wide attacking patterns are a double-edged sword; the attacking team is spread as thinly as the defensive one. In Nagelsmann’s 4-2-2-2, if the ball is lost centrally in the final third, the counter-press can put the squeeze on right away with the front four boxing the opposition in.

In contrast, if the ball is lost out wide, Bayern’s high line is instantly put in a more compromised position — and the opponent has more time and space to play through the Bayern press, and, indeed, the midfield.

This hasn’t always prevented goals, to be fair; nor have Bayern always scored to their potential within this system. However, it is the trade-off that Julian Nagelsmann appears to have made. The current assembly of attacking pace and flair at Bayern could turn on the style even more by adding another dimension — width — to their arsenal, but on balance the sacrifice in positional soundness and counter-pressing structure is not deemed to be worth it.

If it helps the team enjoy some more wins of the 2-0 rather than 5-3 variety, though, Bayern fans can have no complaints.