With forward Serge Gnabry dealing with injury issues, Julian Nagelsmann may opt for a shake-up in his front four.

Share All sharing options for: Report: Kinglsey Coman may start in attacking midfield, Thomas Müller at forward against VfL Bochum

Winger Kingsley Coman is available again after completing his three-game suspension earned for a red card last May. It’s coming at an interesting time for Bayern Munich, as one of their two forwards, Serge Gnabry, is dealing with injury. As a result, it’s being reported that Thomas Müller may move into the front two to accommodate Coman’s return, to a new position as one of the two attacking midfielders in head coach Julian Nagelsman’s 4-2-2-2.

From Tz, as captured by @iMiaSanMia:

With Serge Gnabry currently not 100% fit, there’s a chance Kingsley Coman would start on the right half space against Bochum on Sunday, with Thomas Müller playing upfront alongside Sadio Mané. Jamal Musiala to keep his place on the left.

This season, Bayern is not exactly playing with traditional wingers, nor traditional forwards, instead opting for a fluid front four and trying to make the most of the direct paths on goal through the half-spaces. That was always going to pose a question for a player like Coman, an out-and-out winger known for his pace and his ability to take people from on either flank. However, it has already been reported that he was being looked at for a position switch this year.

Thomas Müller spent a fair amount of time out on the right wing last week against VfL Wolfsburg, an asymmetry between the tens that might develop further with Coman’s pace — and Müller’s likely propensity for dropping down into a playmaker’s role even as a forward.

We’ve also actually already seen Coman at work in attacking midfield this season. Here he is in the second half of the DFL-Supercup against RB Leipzig, having just come on for Jamal Musiala. He receives a pass through the lines from Marcel Sabitzer, drives forward with pace, and creates the hockey assist for Gnabry’s goal to make it 4-1: 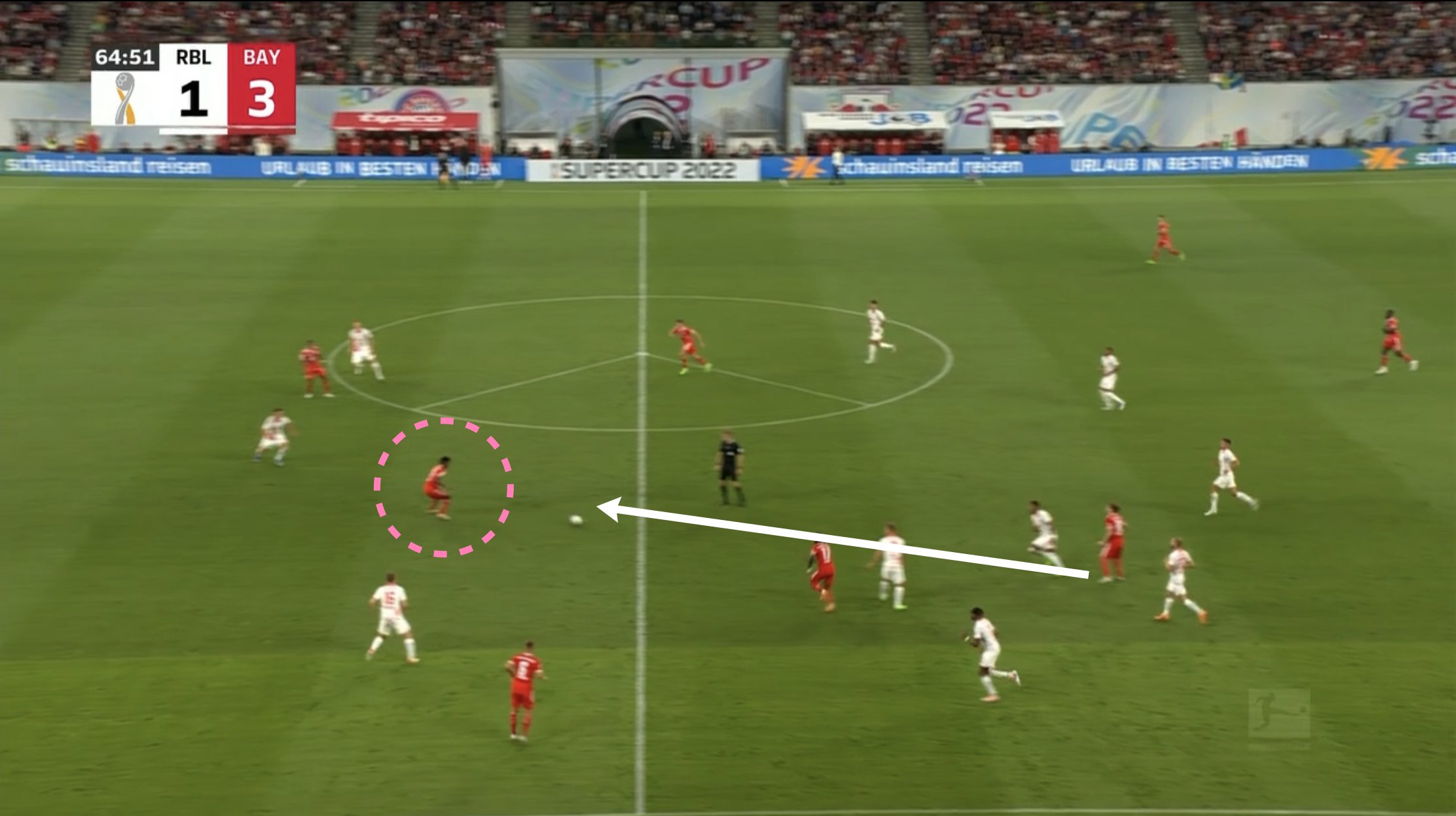 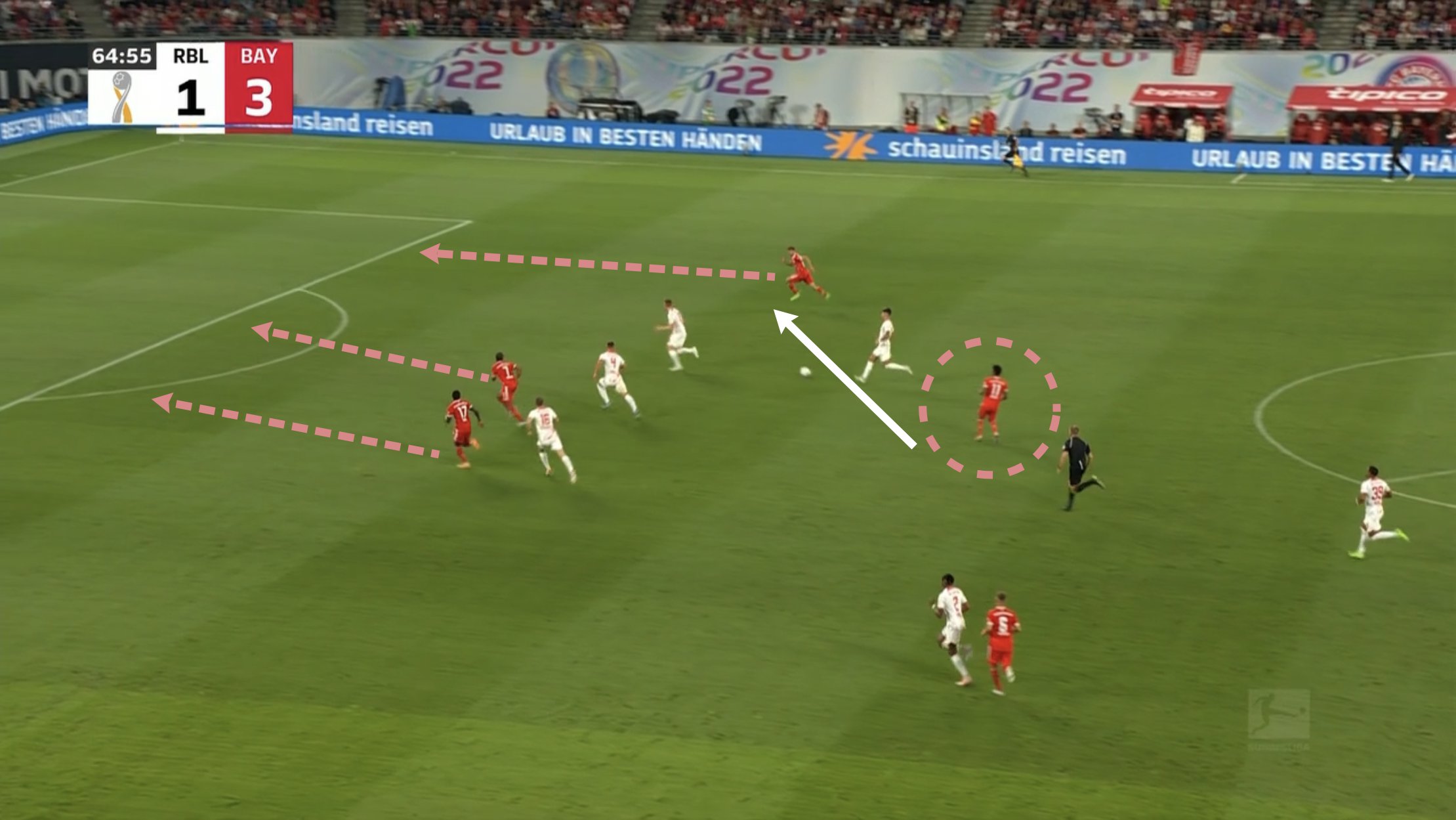 Coman showing his vision playing through the center | ESPN

Müller will bring something a little different to the forward line, but it might just suit him. The Raumdeuter doesn’t have Serge Gnabry’s electric pace, but is known for his pressing energy as well as his knack for weird, unorthodox goals. Keeping him more central and closer to the box makes sense when another forward isn’t available.

Finally, there’s the matter of Leroy Sané — a half-space playmaker by trade who, is perhaps more comfortable on the left than the right. Sané, though, appears to be behind Coman as well as Müller and Musiala for now.

It’s going to be a long season, so there should be time to see all of these combinations. Whether Nagelsmann expects like-for-like drop-ins and adaptations to fixed roles in his system, or intends to field a wide array of change-ups based on his front four personnel, will be a key storyline this year.

Zukünftige Taktik: Potential systems Bayern Munich could use this season