After watching Champions League teams RB Leipzig and Eintracht Frankfurt get their teeth kicked in by Bayern Munich’s relentless attack, VfL Wolfsburg manager Niko Kovač decided he’d rather not endure the same, and set up his team to congest the inside channels.

Bayern, finding central spaces compacted, brought both full-backs into the game. Benjamin Pavard was a key man in Bayern’s build-up from the right flank, while left-back Alphonso Davies — in a striking departure from the previous game — took up advanced positions to pull apart the Wolfsburg defense.

Wolfsburg started this game on fire, with two shots and three corners in the first 17’ while Bayern had only one of each. However, Bayern soon regained a control they would not relinquish.

Here’s how it happened.

Wolfsburg tested Bayern’s back-line, especially Pavard, by hoofing it from deep at every opportunity — and early on, they had some success when they drew Bayern forward in numbers.

In the seventh minute, Pavard just manages to recover in time to deal with one of these. How was the situation created? Bayern’s front four are engaged in a box-shaped high press, while left-back Alphonso Davies is keeping an eye on space that Wolfsburg right-back Ridle Baku might advance into. Baku, however, stays in his own backline and the Wolfsburg progression skips the midfield entirely, at which point it’s 3-on-3 in the final third. A real warning shot across Bayern’s bow.

After a short injury break in play around the eighteen-minute mark, Julian Nagelsmann waves some quick adjustments at his players. This appears to be when he instructs Alphonso Davies to go forward and central midfielder Marcel Sabitzer to fill the vacancy at the back. 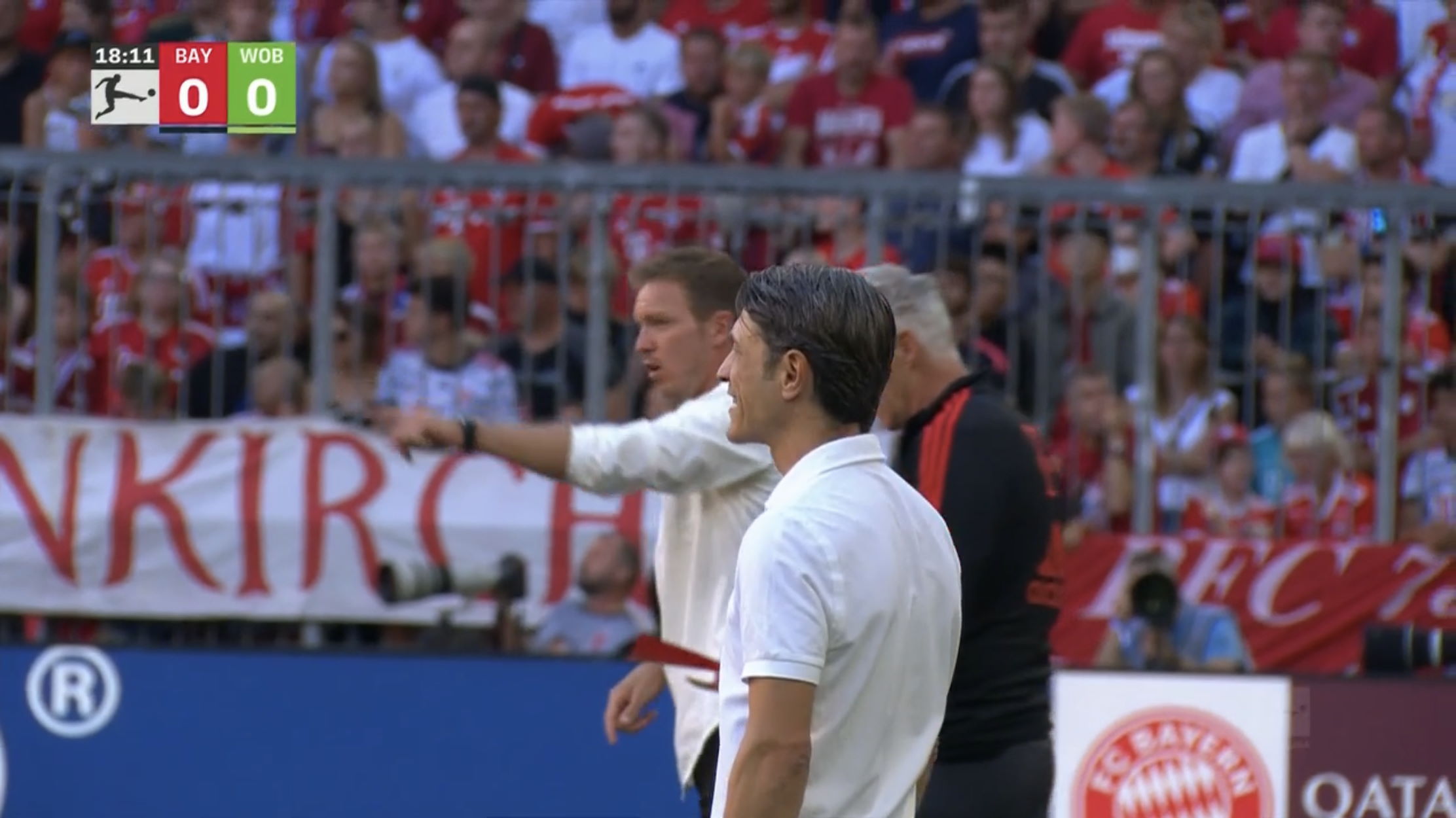 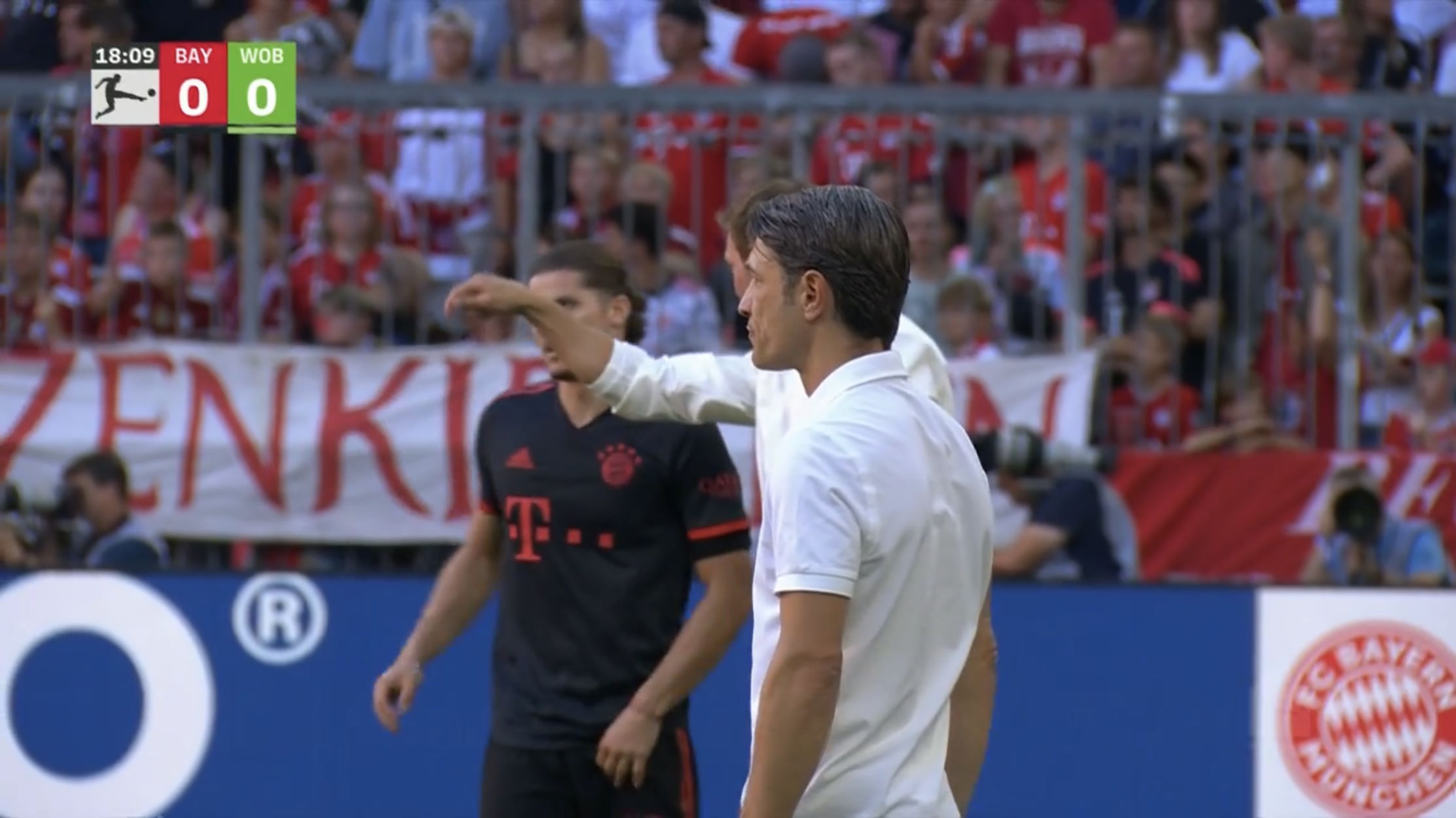 Just prior to the injury stoppage, Neuer had worked the ball out to Davies in the left-back’s spot — more typical of the 2-4-2-2 build out we’ve seen this season. By the restart, Marcel Sabitzer had dropped down to that spot instead, with a build-up shape of 2-3-5. 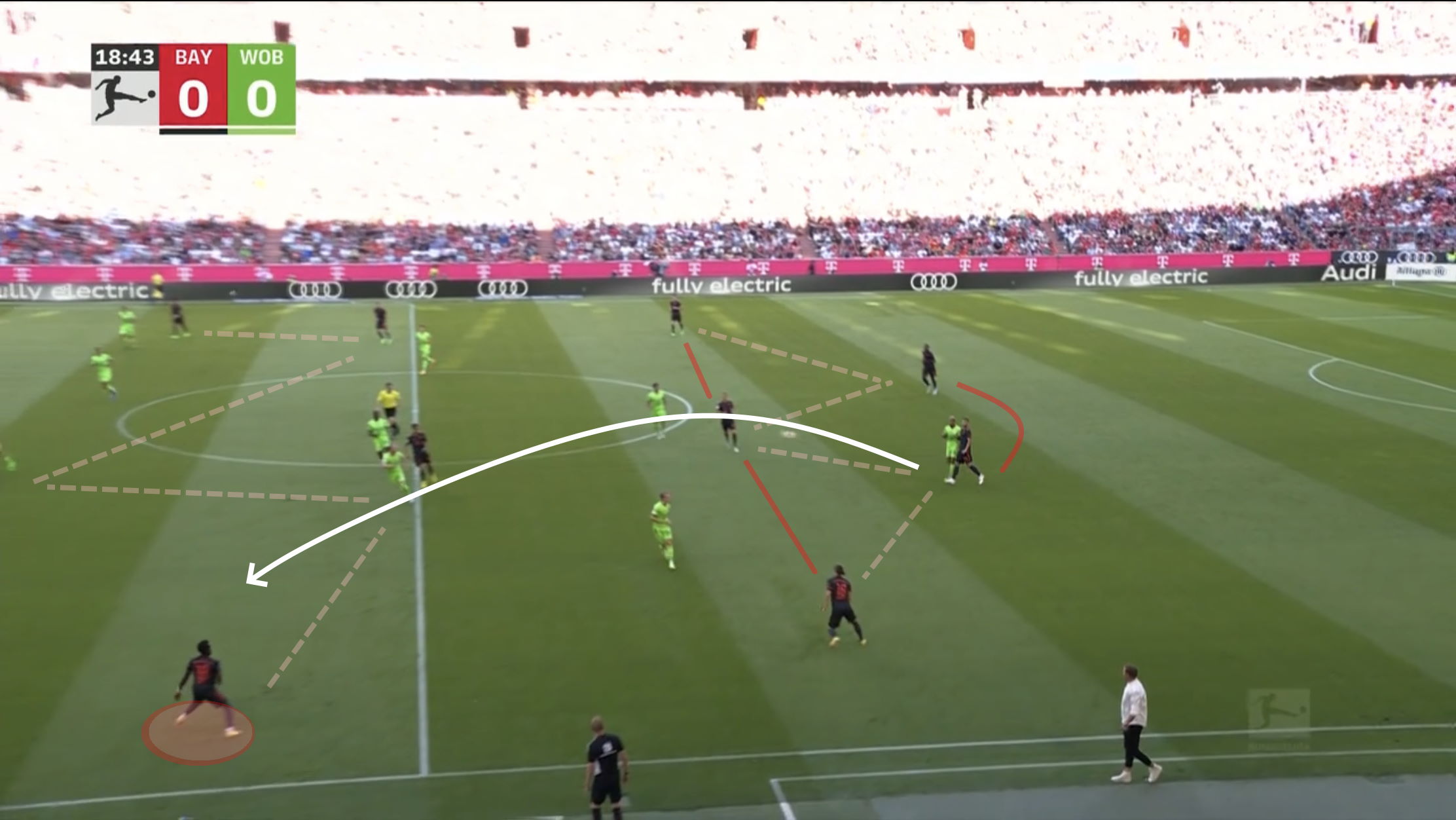 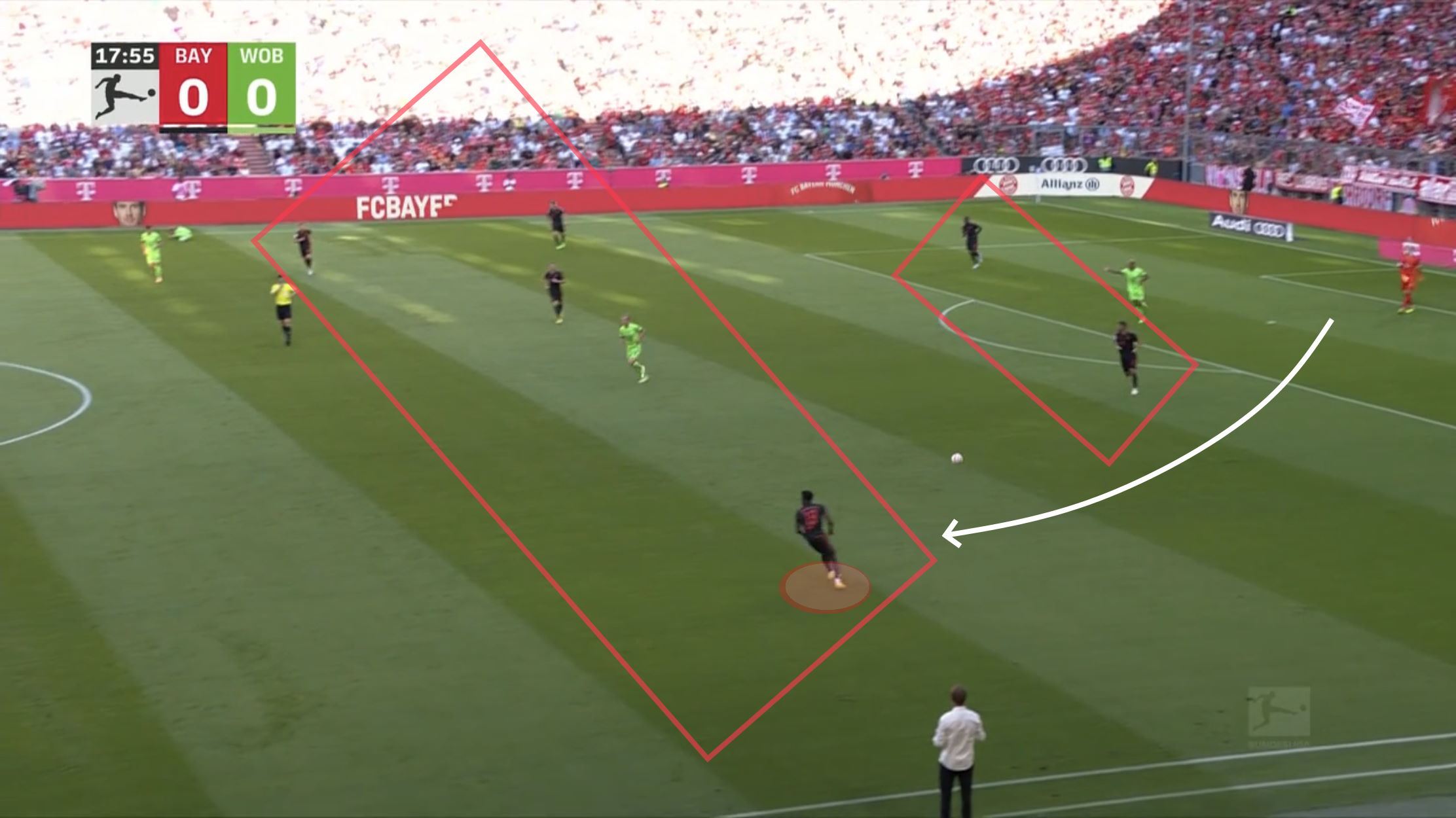 This passage of play immediately results with the ball in the back of the net, though it’s ruled offside. Davies receives high on the left wing, with both right-back and central mids converging. He cycles the ball back, and the back line retreats as two forward runs develop. Musiala is then able to slip between the lines, to be found by Dayot Upamecano:

From there, it’s a trademark interplay between Nagelsmann’s tens: a diagonal ball played left to right; an overlapping runner on the right wing; a low, driven cross to the back post. Wolfsburg’s narrow alignment is unable to deal with this, but Sadio Mané is well offside.

Leaning on the switch

Bayern’s pace in attack presented a dilemma for Wolfsburg: to respect the charging forwards and backpedal, or keep it compact between the lines. And sorry, they could not manage both.

Bayern added to the misery by squeezing both central mids towards the right, relying on their own technical excellence to progress the ball up the right sideline, and finding the right moments to send their forwards bombing forward. Thus they opened the switch while at the same time separating Wolfsburg’s defense from their midfield. 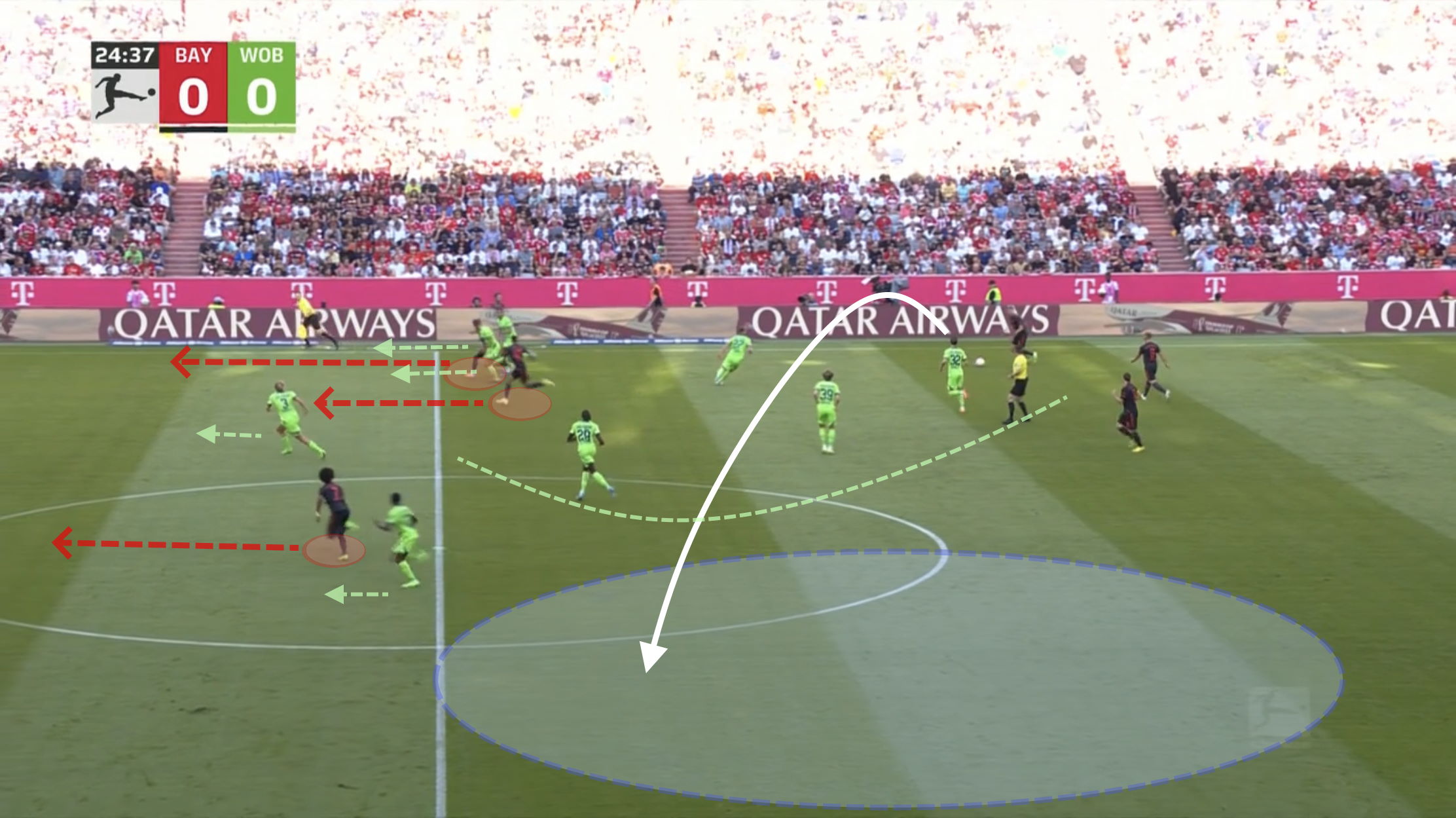 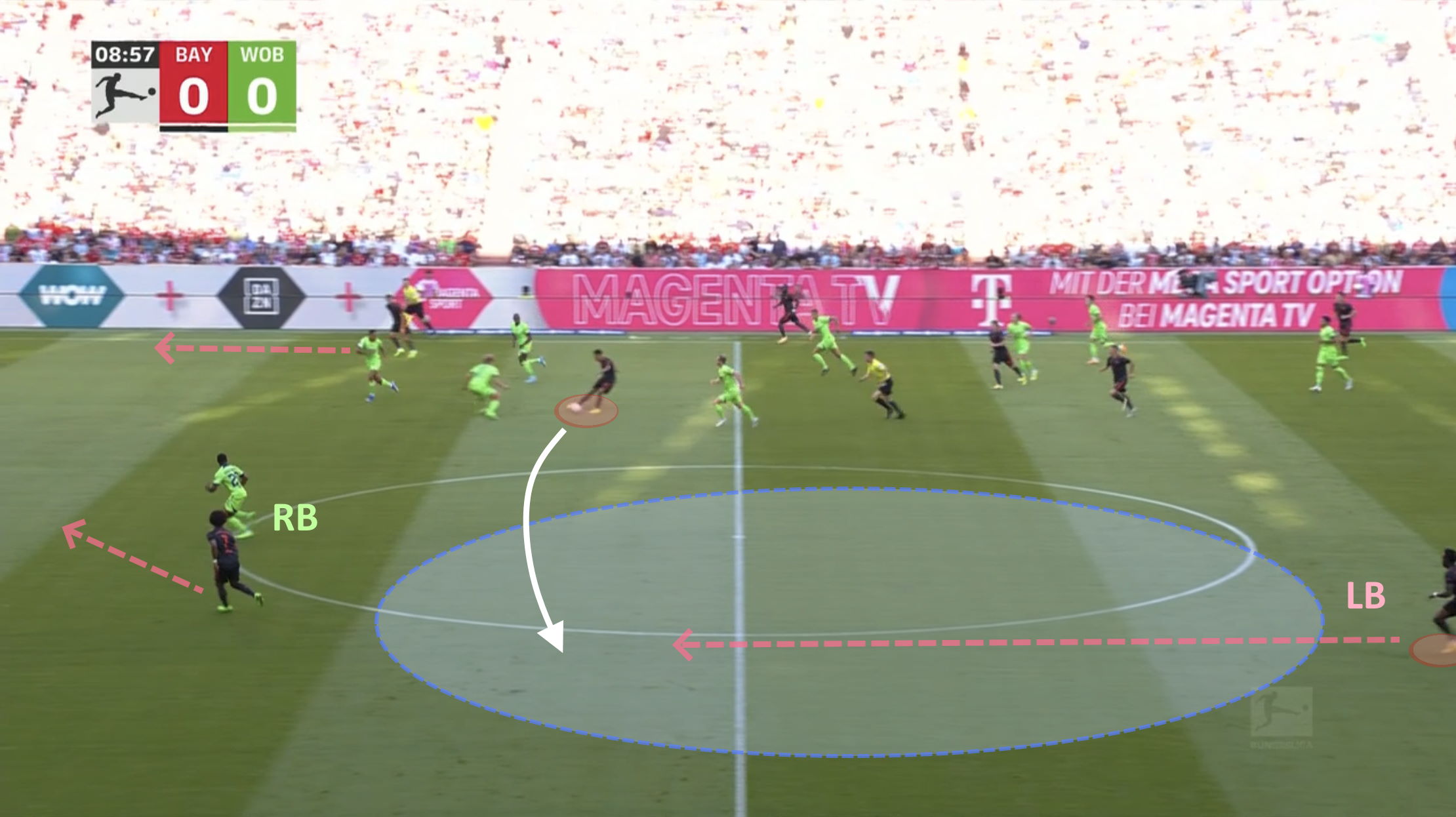 A whole area code on the left; yes, these are two different plays

Bayern’s threat of direct, central runs on goal meant Wolfsburg right-back Ridle Baku was often kept smack center of the pitch even in his own third. This opened up possibilities for Bayern to play in a left ‘winger’ — often Davies — while already in the final third.

Davies additionally had license to drift inside, to add another layer of unpredictability to Bayern’s attacking movement. Who would Wolfsburg find on the left flank? Sometimes Davies, sometimes one of the forwards, and sometimes no one. These play-making forays ultimately led to both Bayern goals.

To compensate for Davies’ forward adventures, Marcel Sabitzer stayed low on the left side of midfield, and in transition, dropped into the back line. Thus the central areas were vulnerable to overloads, but Wolfsburg lacked either the willingness or technical ability to press this issue — often continuing to play it long.

Even when handed a gift late in the first half, Wolfsburg didn’t capitalize. A loose ball had left Bayern scrambling, but the Wolfsburg midfielder here doesn’t manage to feel his teammate in space next to him. He nearly dribbles into Kimmich and Sabitzer cleans up from the left-back position. The likes of Kevin De Bruyne, a Wolfsburg player before transferring to Manchester City, might have converted the opportunity.

For the first goal, it’s Davies’ dribbling action that jumbles up the opposition midfield and releases both of Bayern’s tens. That same interplay between them — this time, Thomas Müller slides it across to Musiala on his right. 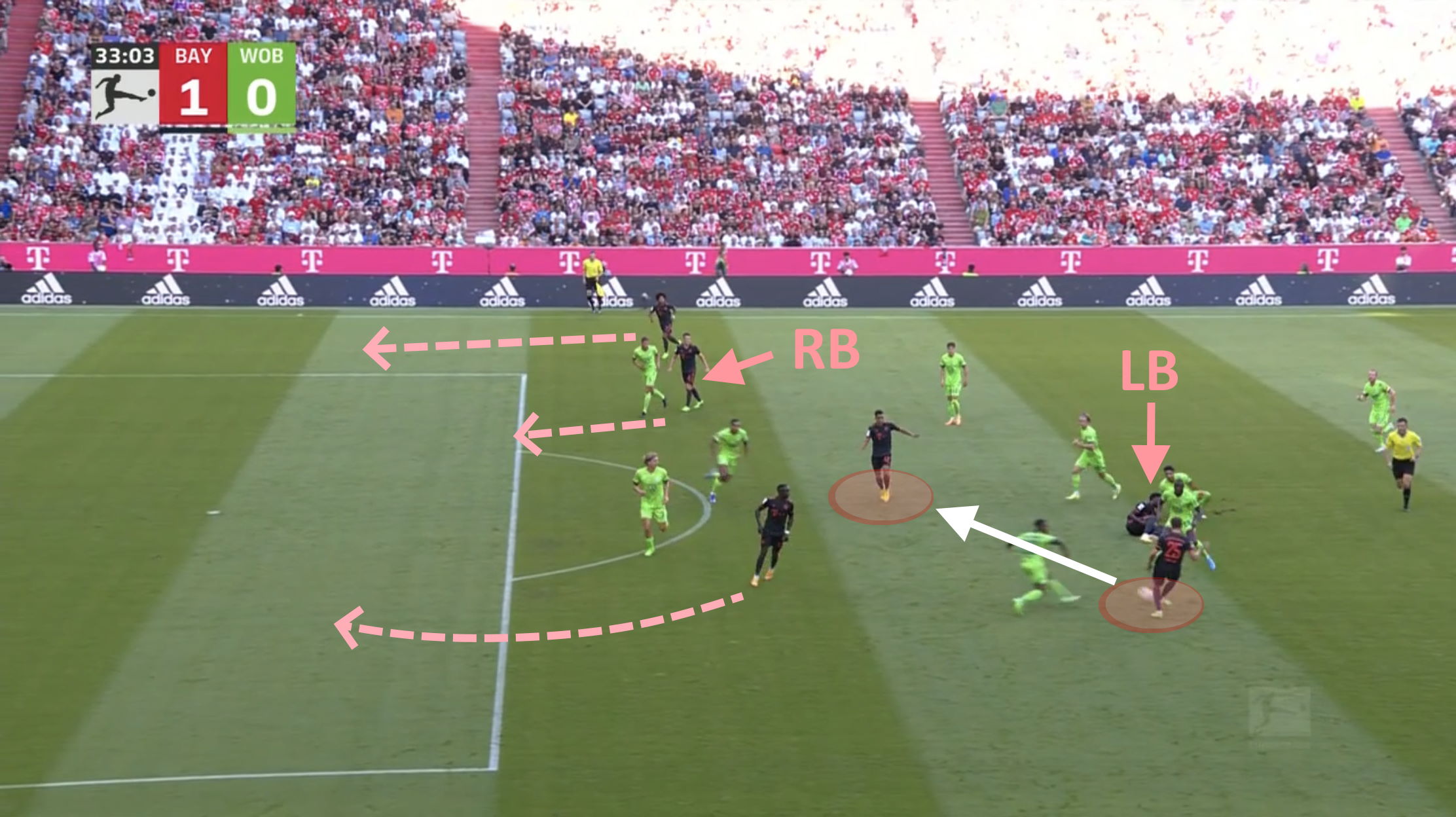 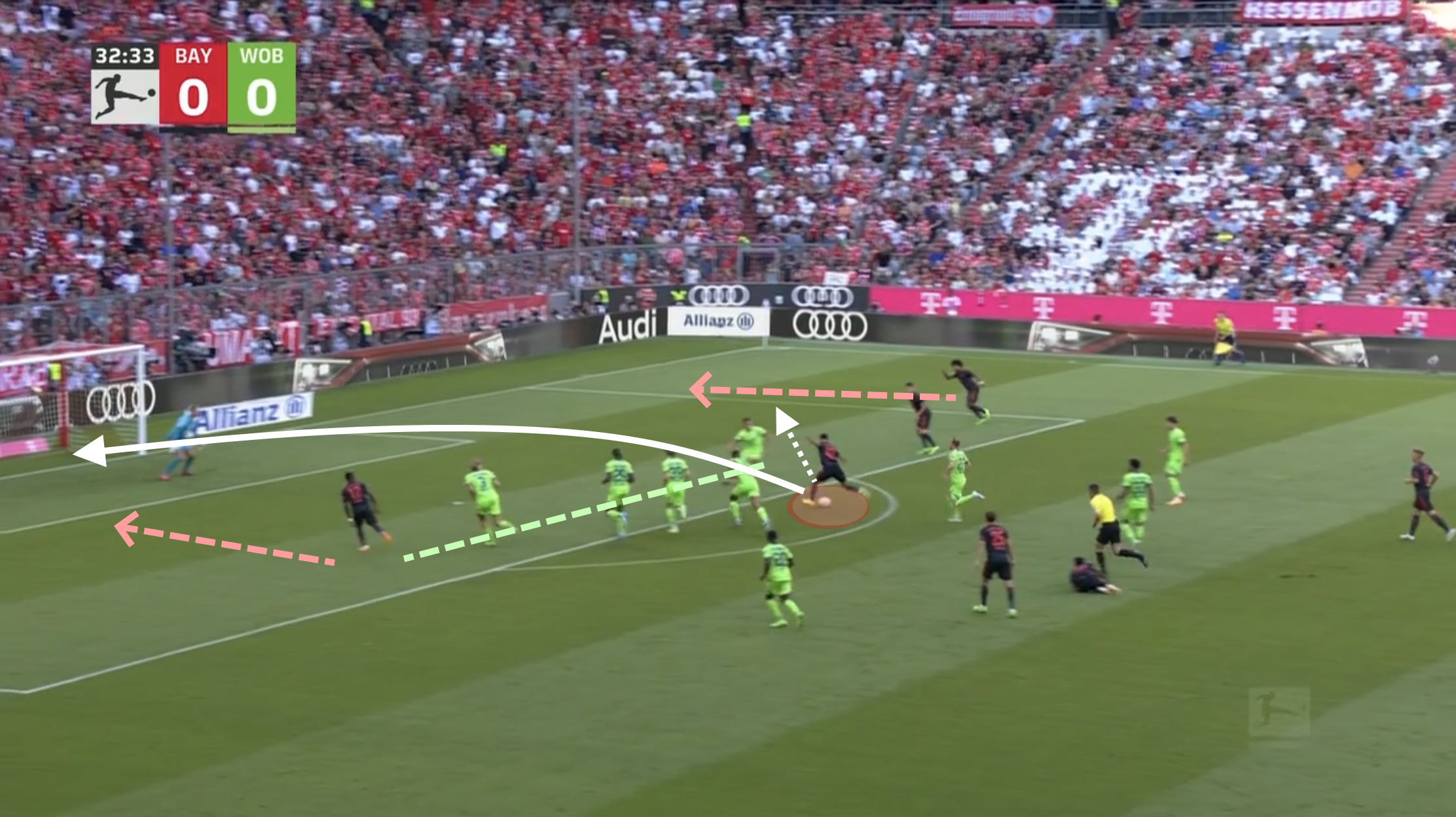 This diagonal slip ball from Müller to Musiala also has the effect of removing one center-back, making it 3-v-2. Musiala scores himself this time, but he had Gnabry to play in for another cross in the manner of the disallowed goal earlier.

After the goal, Davies is back at it straight away, driving infield to create. While this time Wolfsburg clamp down with numbers — count eight players boxed up in front of goal — there are no tens to cut out. Bayern’s forward line has fanned wide, with Sadio Mané freed to take Davies’ place on the left. Pavard might’ve tried to find him there instead of shooting from this range.

Bayern’s 3-5 attacking structure is remarkably stable there as well — a flat four across the width and a single fulcrum (Davies) in front of a base of three. Patient, probing circulation is an option for Bayern, though it may go against their more direct style.

The second goal comes from a throw-in — some individual magic from Davies and a deflected ball into goal amid chaos. Note that Baku is occupied once again by the central runs.

Bayern looked intent to work it to Davies in these positions, and Niko Kovač did not appear to have an answer.

Killing the game, or not

In the second half, the deficit widened the distance between the defensive and midfield lines for Wolfsburg. But coincidentally, this may have let them off the hook. By routinely granting Bayern’s advancing midfielders tantalizing amounts of space, Wolfsburg inadvertently invited Bayern to go for long-range shots instead of cranking out tap-in automatisms.

Here, Kimmich tries his luck from well beyond the 18-yard-box despite a narrow back-line on their heels and an opposition midfield doing little more than spectating. The amount of space Pavard finds himself in on the wing is nothing short of obscene.

Musiala shows great sense as well to show for the ball short instead of joining the runs on goal. Had he received, he might have teed up Pavard anyway, or slipped in Müller — all while removing one of the center-backs from the line.

Later on, it’s Marcel Sabitzer’s turn to shoot from range after Davies is played into space. Well-engineered build-up, but perhaps a touch hasty from that distance and that angle. 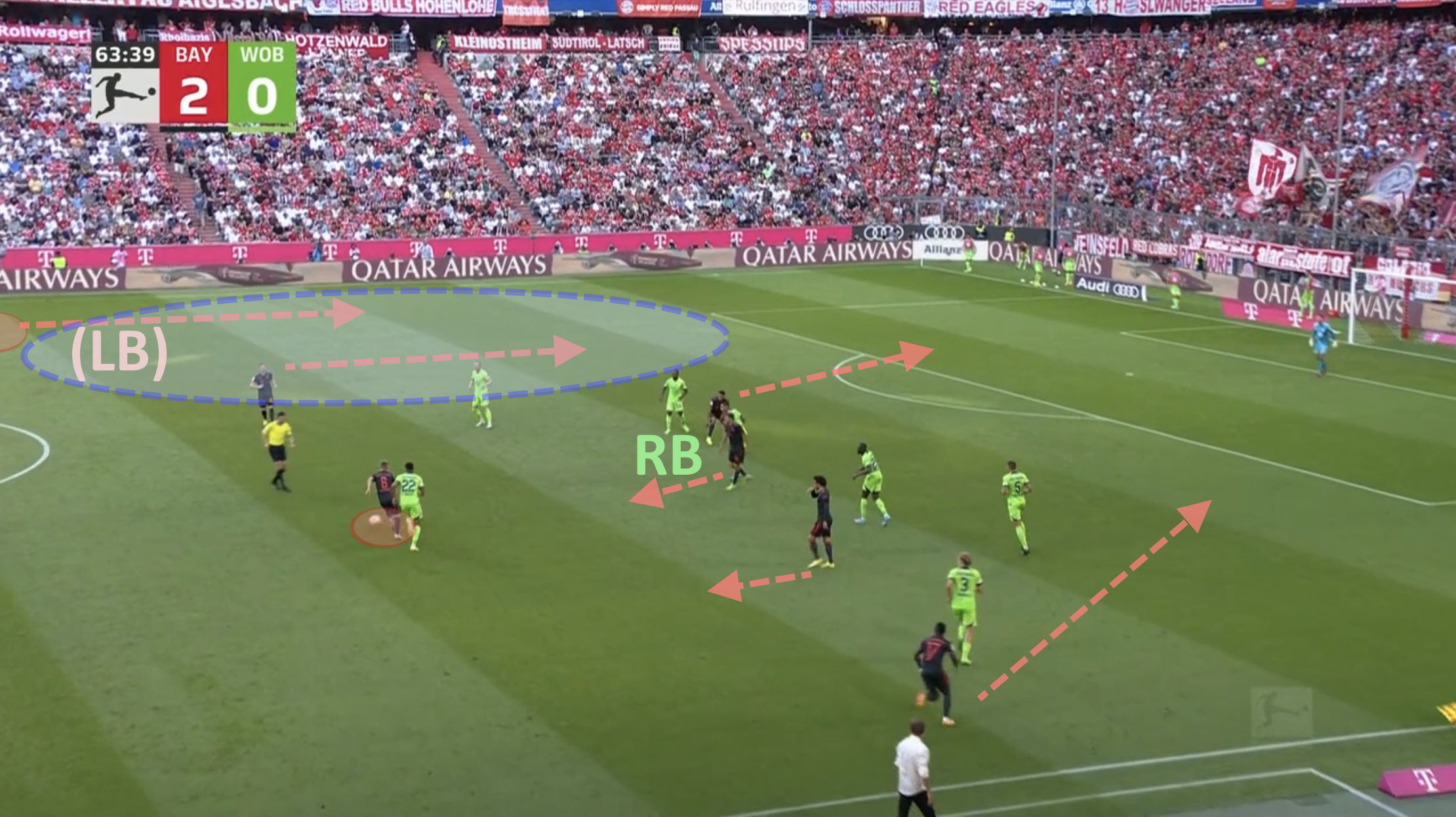 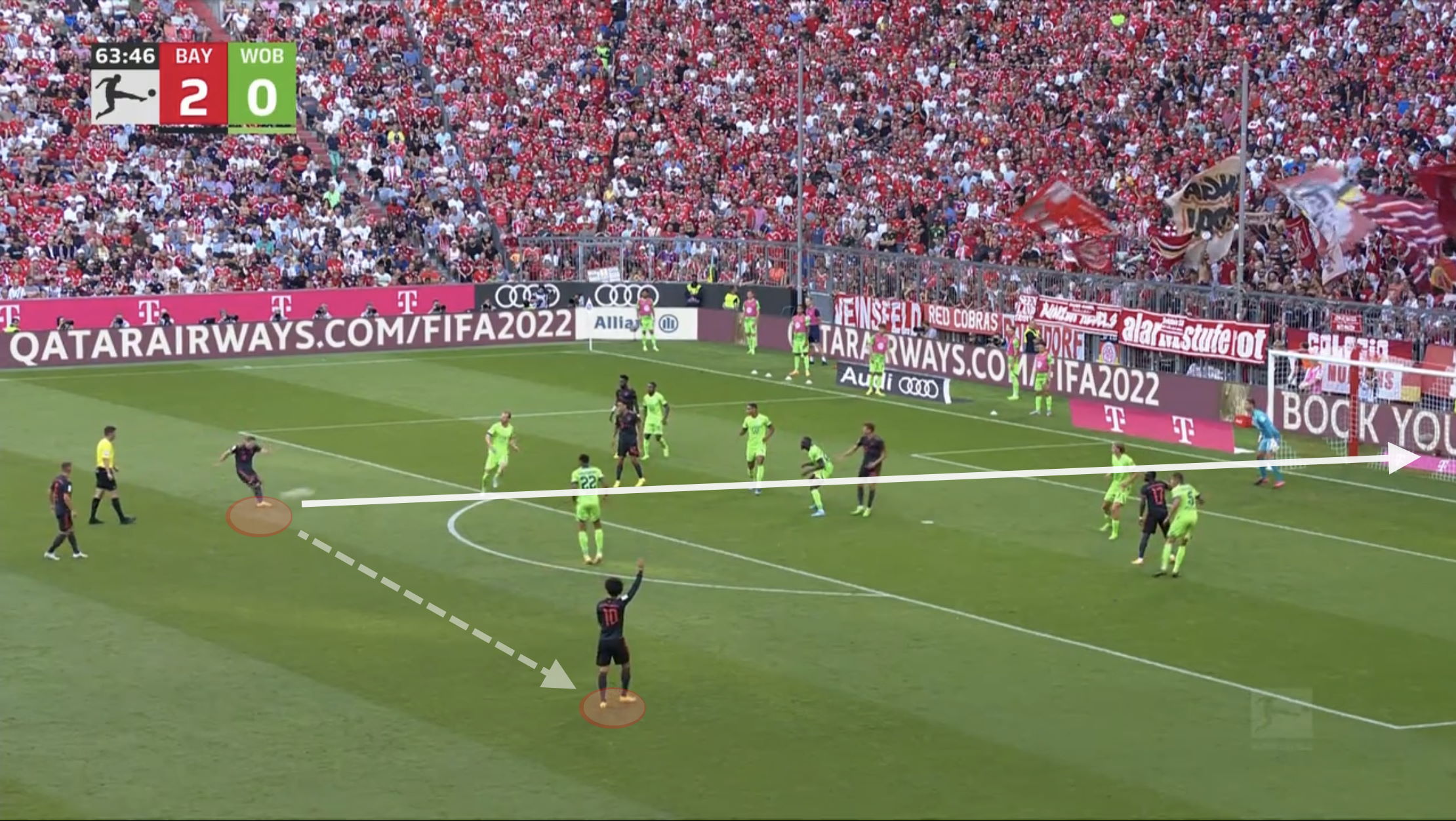 Another switch, another long shot | ESPN

Patience and over-possession might not really be in Bayern’s DNA, to be sure, nor Nagelsmann’s. But at 2-0, there’s something to be said both for grinding out the seconds on the clock and chipping away at the opponent’s will by not letting them on the ball. A pass to Leroy Sané here might have given Pavard time to arrive again on the overlap, for example. These long shots seemed very much in the players’ instructions, however.

One player who did wait: Mathys Tel. Bayern’s newest center-forward prospect pounced on a loose ball in the center of the pitch and drove in on goal, but held up the ball with extra touches and movements as he bided time for support to arrive. 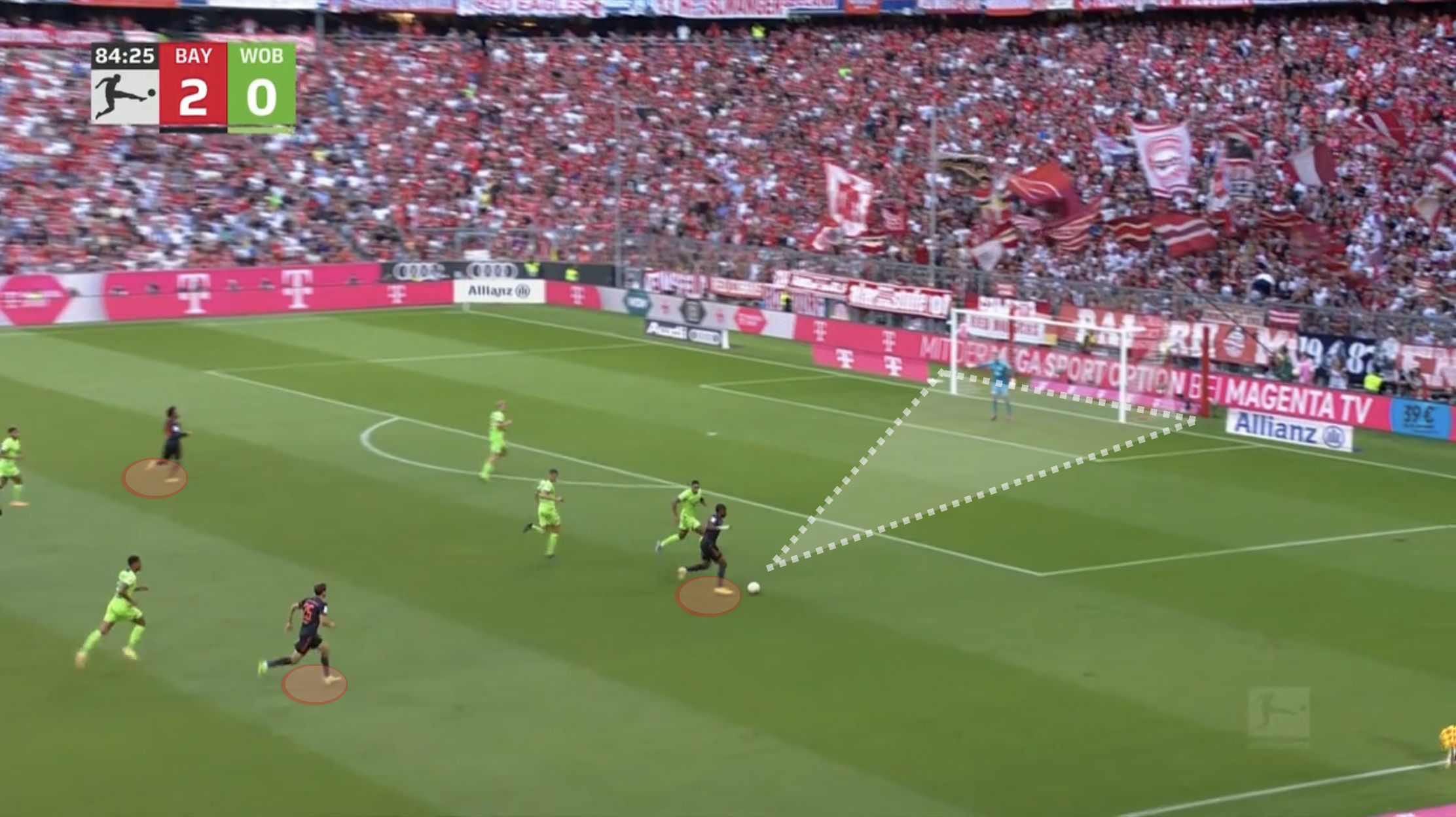 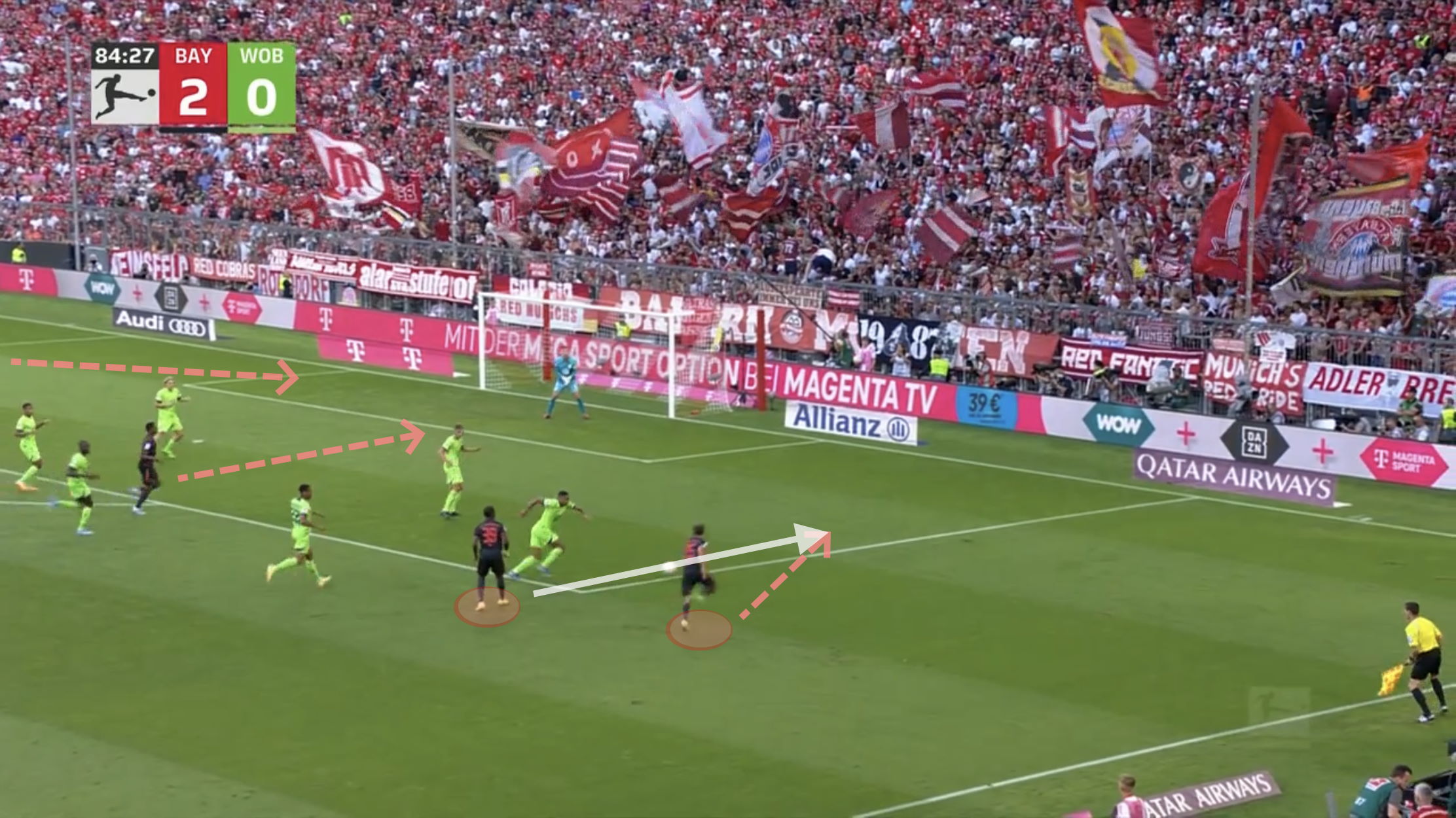 It’s terrific composure and awareness from the youngster, and excellent weight and timing for his release of Thomas Müller as well. A promising glimpse of the seventeen-year-old’s footballing acumen, in his first substitute appearance in place of (rather than alongside) Sadio Mané.

Summary, and odds and ends

Bayern were made to work a little harder, but earned their rewards no less comfortably in the end. Once Bayern reacted and seized the game, Wolfsburg looked hapless.

The tactical battle, if rather one-sided, was at least a chance to flex some different muscles for Bayern. The game was a reminder that Alphonso Davies can still get forward:

On the other side, Pavard’s ability to facilitate build-up along the right flank was key to freeing Davies down the left. Against Wolfsburg, Pavard led the team in xG chain (understat) and was Bayern’s only player to make WhoScored’s Top 5 European Leagues XI this week.

Further upfield, there’s an asymmetry in Julian Nagelsmann’s two tens. Jamal Musiala’s ascendancy is seeing him do everything, everywhere, all at once. Thomas Müller, meanwhile, is residing more and more on the right wing, but proving he can still pull the strings from there — as well as pop up in front of goal at the right times. He scored the second, and practically assisted the first, both from central positions.

There’s a great degree of fluidity among the entire front, but Müller’s heatmap offers some insight into how Kingsley Coman might be deployed this year, if indeed Bayern are looking to move him into attacking midfield.

If Wolfsburg succeeded in keeping the Rekordmeister relatively quiet, it came at the cost of being pinned back and smothered. Bayern will look back at the second half and be disappointed they didn’t put the game away more emphatically — but that they aren’t clicking 100% yet is probably the really scary part.

Next up: second-from-the-bottom VfL Bochum — who, in their last meeting, handed the Bavarians a stunning 4-2 humbling. What are Bayern brewing up in the kitchen this week? Tune in Sunday to find out!

Hope you’ve enjoyed reading! How do you think Bayern’s next opponents will try to tackle the challenge?