Going to source this screencap from the excellent @PremLeaguePanel, not sure how to embed tweets but the link is here:

The build-up to Villareal’s winning goal. There is nobody occupying Bayern’s number 6 position. You cannot win Champions League knockout ties with structural issues in transition like this. It happened throughout both legs. pic.twitter.com/0zqLuHOO1B 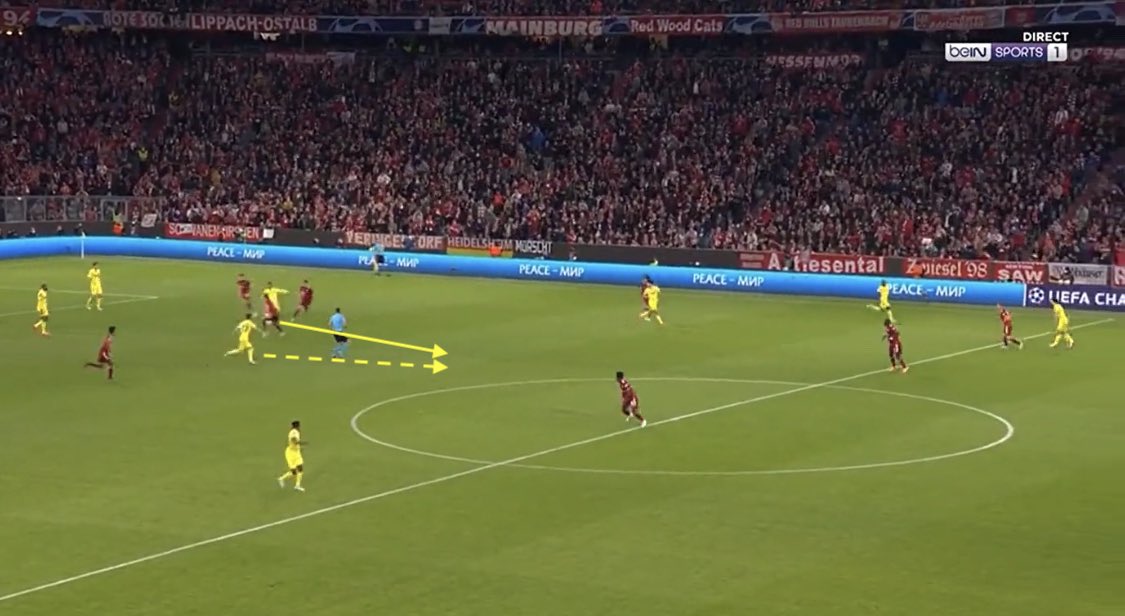 Devastating sequence as the 3-man backline suffers a huge breakdown, but as @PremLeaguePanel notes the 6 spot is vacant, which is the bigger issue. This time, literally, there really was no midfield.

On replays it's blurry for me to see but I believe also the 3-man backline here is Davies, Upamecano, and Kimmich left to right.

As we see, Villareal have won the ball and are flooding numbers forward. Lo Celso is about to receive the ball with four runners ahead of him for four defenders. Bayern are in something of a 3-0-7 shape in buildup (jokes, but...also not) with wingbacks Sané and Coman scrambling to get back. This moment in build-up is where the game was lost, much more so than any minor positioning judgment Davies made at the end.

So it's a serious structural breakdown, and I wonder how it happened -- the replays don't show enough of the before. Working backwards, in the first place, Pavard is somehow upfield. That's him off the left shoulder of the player on the ball. I understand Bayern were pushing for a goal, but this doesn't seem wise and I wonder if it was part of the plan...

...but I suspect not, or it's a massive mistake by someone else to not cover Kimmich vacating the 6. In this case that looks to be Goretzka, who did a great job usually of cutting out attacks when required. On this occasion he sees two teammates trying to harass the dribbler and turns upfield to join them (that's him right between the two arrows)...when instead what was required of him was to drop back to fill the lane. Like this, what we see here, cannot have been by design.

This is a tendency in a lot of different Bayern players in previous reviews of defensive breakdowns I have done, where aggression is so built into their DNA. They see a thing move, and they chase. It does not matter where on the field, or what they leave behind them, or what runs are happening off the ball. They chase the ball as hard as they can, even if they can't get there, even if two of their teammates are already tied up on this guy. It's press press press, just try to win the ball back ASAP and if you can't? Well, let's not think about the 'if you can't'.

And so that's one criticism I would have of the notion that Bayern simply need to play loose, fearless, and aggressive. For me, controlled chaos is the way, and structure is everything. You can better attack with confidence if you know that when you lose the ball, the entire team will react instantly and smartly with their shape to cut out the opportunities and get back to attacking.

Pressing hard is good, but at the right moments. It is more important to press smart and to avoid putting too many eggs in one basket unnecessarily.

It's something I think a lot of Bayern players have to unlearn, against their habits and instincts, but it will make this a better drilled team capable of higher attacking capacity (out of whatever formation or setup). And to make it consistently in the Champions League, you can't open yourself up to getting killed like this. It's not enough to accept these concessions and say hey, we'll simply score more on the other end...because in the big games, it is not easy to score, period.

Bayern have to get sharper in these aspects and that will take time and lots and lots of drilling. But I have confidence they'll get there. This was a decisive humbling, and maybe the reminder everyone needed: that no matter how well they show for 85 minutes and control the game, one moment of lost discipline can undo it all.