A wonderful team goal caught the Bavarians asleep and nearly derailed their day from a 3-0 advantage.

Share All sharing options for: Film Room: How Bayern Munich were cut open by Hertha Berlin

Bayern Munich don't concede often, but they did so twice in a matter of minutes in their slightly nervy win over Hertha Berlin on Saturday. The first goal came out of open play — and not in transition, either, which given Bayern’s risk-taking attacking bent would have been more understandable.

Instead, Hertha caught the Bavarians napping right after their third goal via a simple hoofed ball over the top. In a flash, a game that seemed out of reach was back on.

Let's look at how it happened.

Hertha send three forwards forward to receive this ball from the left-back (who is pressed by Sadio Mané). Bayern maintain numerical parity in the back line (3-v-3) while having superior numbers in midfield, where Hertha aren’t attempting to build through.

Instead, the plan is to loft up a prayer from the back and see what happens. If Hertha can recover possession, there are lurking threats, maybe — like off the shoulder of tucked-in right winger Serge Gnabry (labeled #3 in pink).

But it doesn’t come to that.

Center-back Dayot Upamecano intercepts, but Bayern fail to win the second ball. It’s headed into midfield, but instead of numbers, Marco Richter floats into space and receives with no pressure around him. Two of the forwards drop back to help muddle the situation.

Where are the rest of Bayern’s midfield numbers? Jogging back, mainly, and far out of frame. Leon Goretzka’s positioning and urgency is particularly suspect.

Goretzka, in arriving late, puts Alphonso Davies on the wrong end of a 2-v-1 locally, even while nominally Bayern’s numbers situation is sound. A chain of three at the back cover goal threats, while Davies and Joshua Kimmich cover the deep-dropping options. With nobody at all to charge down Richter, Davies is forced to step up. 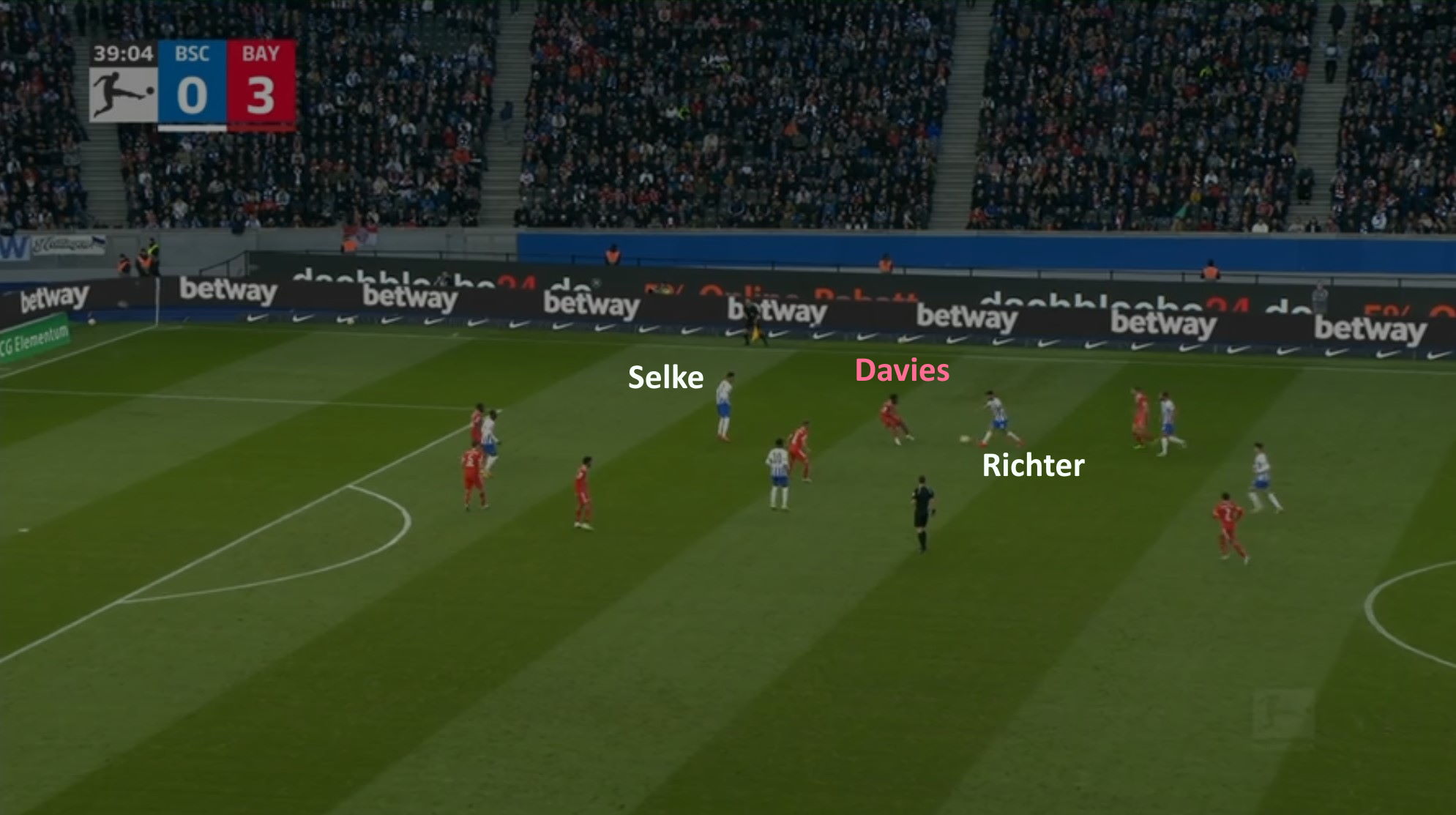 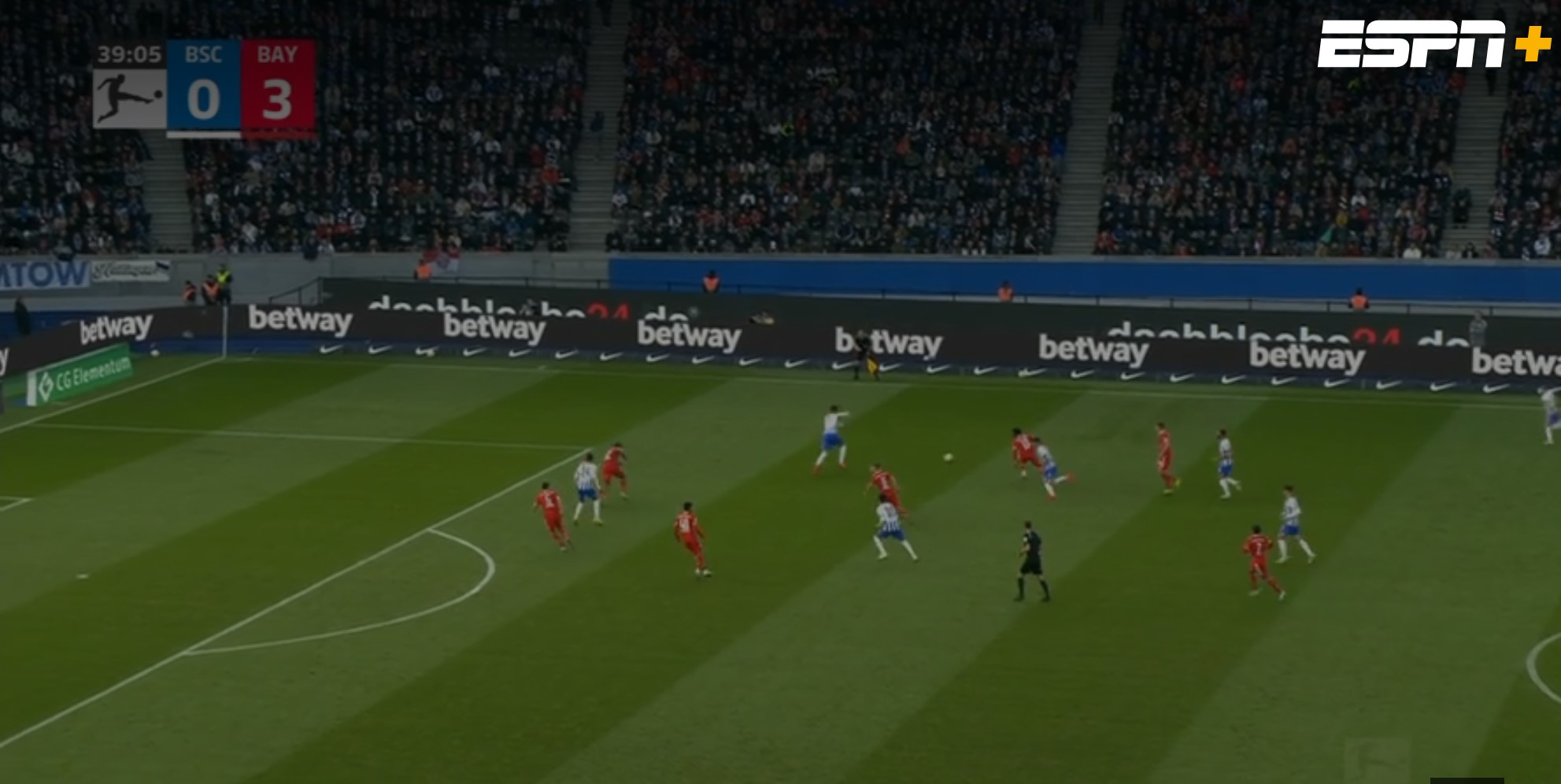 A 2-on-1 that sends Bayern backpedaling | ESPN+

Upamecano is compelled to pull out to the wing to close down Selke. Joshua Kimmich drops in at CB and nobody is available to cover the hole vacated by the No. 6.

From here, errors cascade. Hertha left-back Jonjoe Kenny arrives on the scene unmarked; Sadio Mané, who had pressed him earlier in the play, is still in the forward line. At this point, Bayern’s numerical stability has collapsed.

With Jamal Musiala also jogging back easily, we see that Bayern’s more forward players have not recognized the developing crisis that began with conceding the second ball. As a result, Bayern’s second level are left to fend for themselves against an overload.

That lends to mistakes, and Goretzka’s next decision — while natural — appears to have been the wrong one:

Goretzka must choose between sticking with Richter or shutting down the angle to the deeper-lying Lucas Trousart. Any way you slice it, there’s a free man for Hertha here, but Richter is the more incisive option — and he’s allowed to spring free when Goretzka opts for Trousart.

Here, Upamecano denies the path back to Selke and Davies closes down Kenny on the ball; both are necessary and nobody else is in position to do either.

In the end, Noussair Mazraoui makes the fatal (and most prominent) error in misjudging the flight of Richter’s cross, and Dodi Lukebakio pounces to beat Manuel Neuer. But chances are more than their final act.

Individual errors can happen in spite of the defensive and pressing qualities Bayern possesses. However, team-wide mental lapses are less easy to square. Most teams don't have the technical quality to orchestrate like Bayern — but give them the advantage and it can be straightforward.

In midfield, positional sense is paramount, especially with personnel who are naturally attack-minded. These players must come from higher up to 1) not require defenders to pull out of position to cover the loss of the second ball, and 2) not allow overloads to develop and snowball.

Count this as a possible area of “needs improvement” for the team.

Interested in more analysis of the game? Why not check out our postgame podcast? We talk about the Davies injury, Mazraoui, Choupo-Moting for the Ballon d’Or, the World Cup, and more! Listen to it below or on Spotify.

As always, we appreciate all the support!