Friday’s Bundesliga barn-burner between Borussia Mönchengladbach and Borussia Dortmund was a treat for the neutrals, and also served up some World Cup intrigue for fans of the German men’s national team.

Julian Brandt and Jonas Hofmann provided scintillating goals, while an uneven performance from the prospective Germany back-line could be cause for concern. Rumored Bayern Munich transfer target Marcus Thuram got in on the scoring, too, as Gladbach ran away 4-2 winners to send BVB tumbling into sixth place.

Let’s dive into it.

The striker question is once again front and center for Germany, but they might not need Werder Bremen’s Niclas Füllkrug — whose place in Hansi Flick’s pecking order remains to be seen — to do the scoring.

As he proved for Germany in June, Gladbach’s Jonas Hofmann is a threat moving inside from the right wing and likes to get into goal-scoring positions centrally. For Gladbach’s first goal, he shifts his wing run at the right moment and ghosts past both left-back Raphael Guerreiro and center-back Nico Schlotterbeck to receive right in front of goal:

Hofmann is equally comfortable taking up center-forward positions to start with and dropping deep to add to a midfield overload.

Below, Gladbach generate a huge amount of space in central midfield by keeping their 4-2 front high. Hofmann is paired with Marcus Thuram up top, and settles into space in midfield. Though he doesn’t receive immediately, he stays in the space and BVB fail to account for him. By the time Gladbach pick him out, defensive midfielder Emre Can is throwing his arms in disbelief at how open Hofmann is. 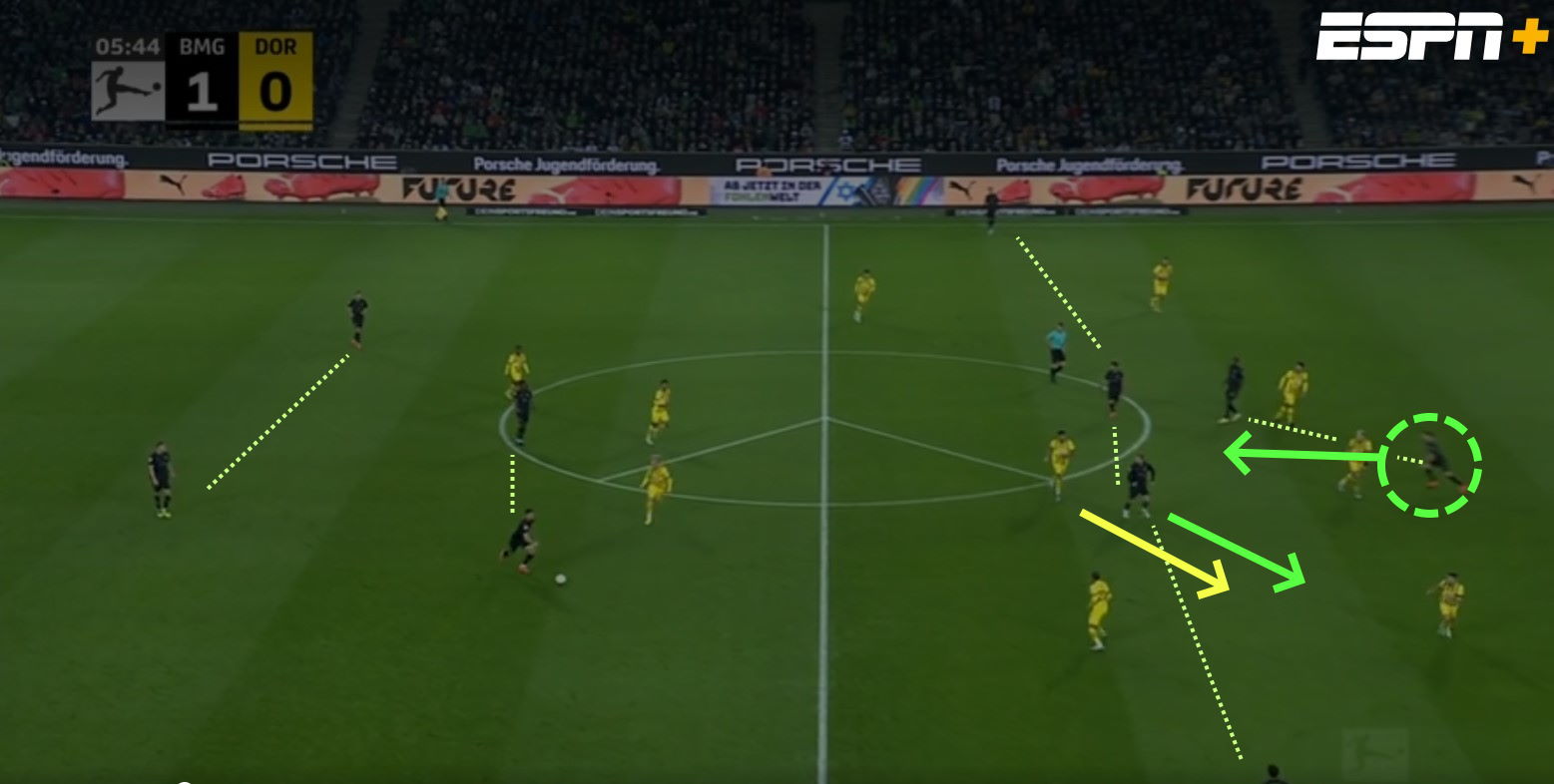 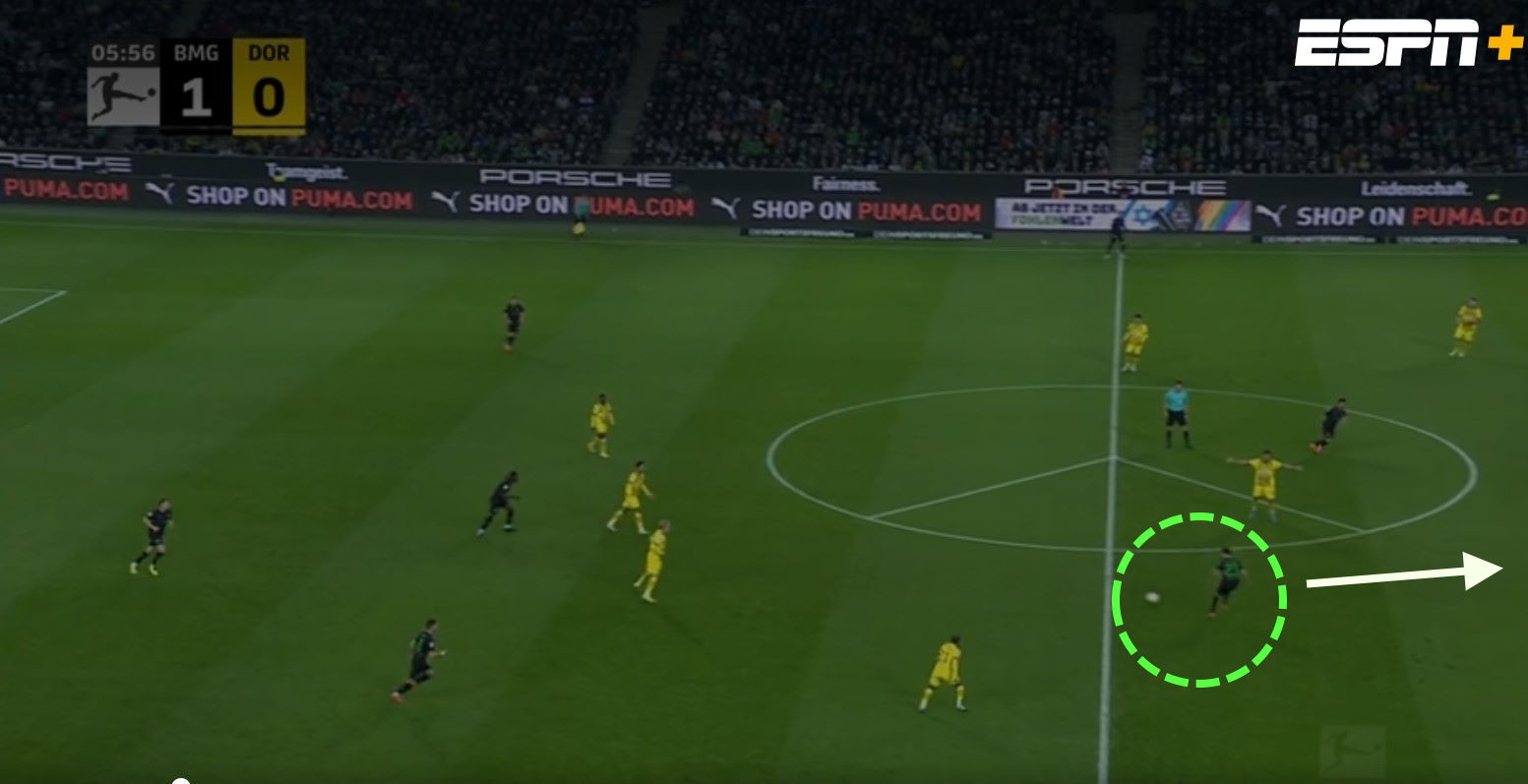 ...and from there, Hofmann turns and instantly plays a through-ball to put Marcus Thuram nearly in on goal, a feat he’d repeat at least once in the second half from a similar half-space position. Hofmann is a creative presence as well as a goal-threat; a winger and a forward as well as a midfield body.

On the other end, Julian Brandt’s leveler for Dortmund showed a different sort of goal — late run from central midfield that any of Germany’s No. 10s might be expected to make. Gladbach are pulled a little too far to one side, opening up a gap between the fourth and fifth defenders in the line:

Brandt’s take-down and first-time finish were of sublime quality. So, too, was his artistry in drifting into a danger position while feigning disinterest before exploding through the gap.

Both players — Brandt and Hofmann — are entering the World Cup in a rich vein of form. And both will face tough competition to get into the XI. But ideally, Germany will have multiple goal threats on the field — as well as extra firepower to call from the bench when chasing games.

Dortmund’s ambitions to supply three out of four on the Germany back-line were scuppered with the exclusion of Mats Hummels, but it wasn’t a banner day for his back-line partners Niklas Süle and Nico Schlotterbeck, either.

On Gladbach’s third goal, Schlotterbeck takes a hard-to-excuse angle as the last man facing two runners, failing to mitigate and taking himself out of the rest of the play:

Thuram’s finish was emphatic, and Süle failed to get into gear to demonstrate his recovery pace from the right-back position.

Schlotterbeck — who, in fairness, did score from a set piece — was beaten again in a 52nd-minute through-ball from Hofmann to Thuram, which Thuram put wide despite being one-on-one with keeper Gregor Kobel. Later, Gladbach appeared to have scored a fifth after an errant Süle header played in Thuram, but VAR ruled it out for a later foul. Results like this can’t be good for rhythm or confidence.

As of now, it’s an open question whether either Süle or Schlotterbeck will start next to Real Madrid’s Antonio Rüdiger, and they will indeed have competition. But perhaps the national team will prove a rejuvenating escape from their Schwarzgelben troubles.

We’ll leave off with a few more thoughts from a game replete with Germany and Bayern-linked talent.

Looking for more chatter on Germany’s World Cup squad, the Bayern Munich contingent, who was left out, and who was a surprise inclusion? Check out our Weekend Warm-up Podcast, which features a deep dive on Hansi Flick’s squad ahead of their tournament in Qatar: