Niklas Süle and Nico Schlotterbeck are the future of the German backline. They're off to a bumpy start together at BVB.

What the heck, Borussia Dortmund! A summer transfer window coup that landed the apparent future — maybe present — of the German men's national team backline has a cloudy future.

Niklas Süle, signed for free from Bayern Munich, and Nico Schlotterbeck, a hotshot youngster bought from SC Freiburg, have the chance of a lifetime playing together at one of the Bundesliga's prime destinations. But after Dortmund's latest stumble — a 3-2 loss to 1. FC Köln — they look anything but ready to carry the mantle into the 2022 World Cup.

Some of this is down to bad luck. Sébastien Haller, Dortmund's marquee striker signing of the summer, is out after doctors uncovered a case of testicular cancer. And some of it is down to coaching — Edin Terzić made the puzzling move to remove his No. 6, Salih Özcan, late in the game and prior to Köln's third goal.

But neither case is good. For years, Bayern and the national team formed a partnership not only through the sheer number of selections from Bavaria, but from the chemistry developed within. That's continuing now, especially in the attack. At Dortmund, Germany's second-biggest club, the assembly of national team defenders has the makings of a healthy rivalry for influence in Hansi Flick's squad.

Süle last year looked like a world-beater. He was regularly one of Julian Nagelsmann's most trusted veterans on the backline. And Schlotterbeck was a prospect enjoying a meteoric rise. In the black and yellow...an intimidating color pattern in nature, but both look far less a nuisance to opposing attackers.

Let's take a couple of stills from the tape of Dortmund's 2-3 loss to Köln. In the first, BVB have something of a back-three situation — using one of their fullbacks to bolster — but a bending pass down the line out of midfield easily bypasses Schlotterbeck on the left side and places a runner through on goal. 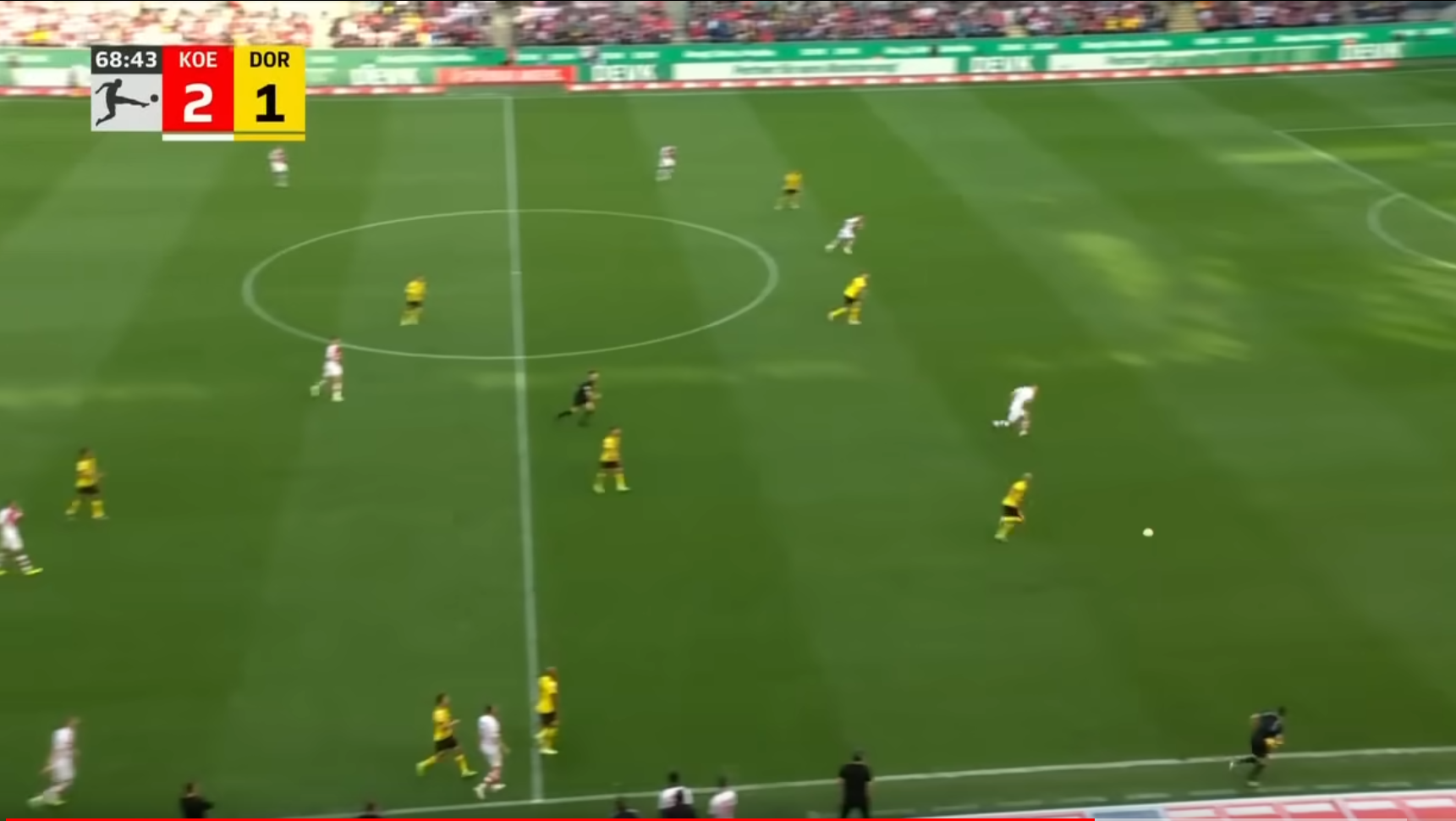 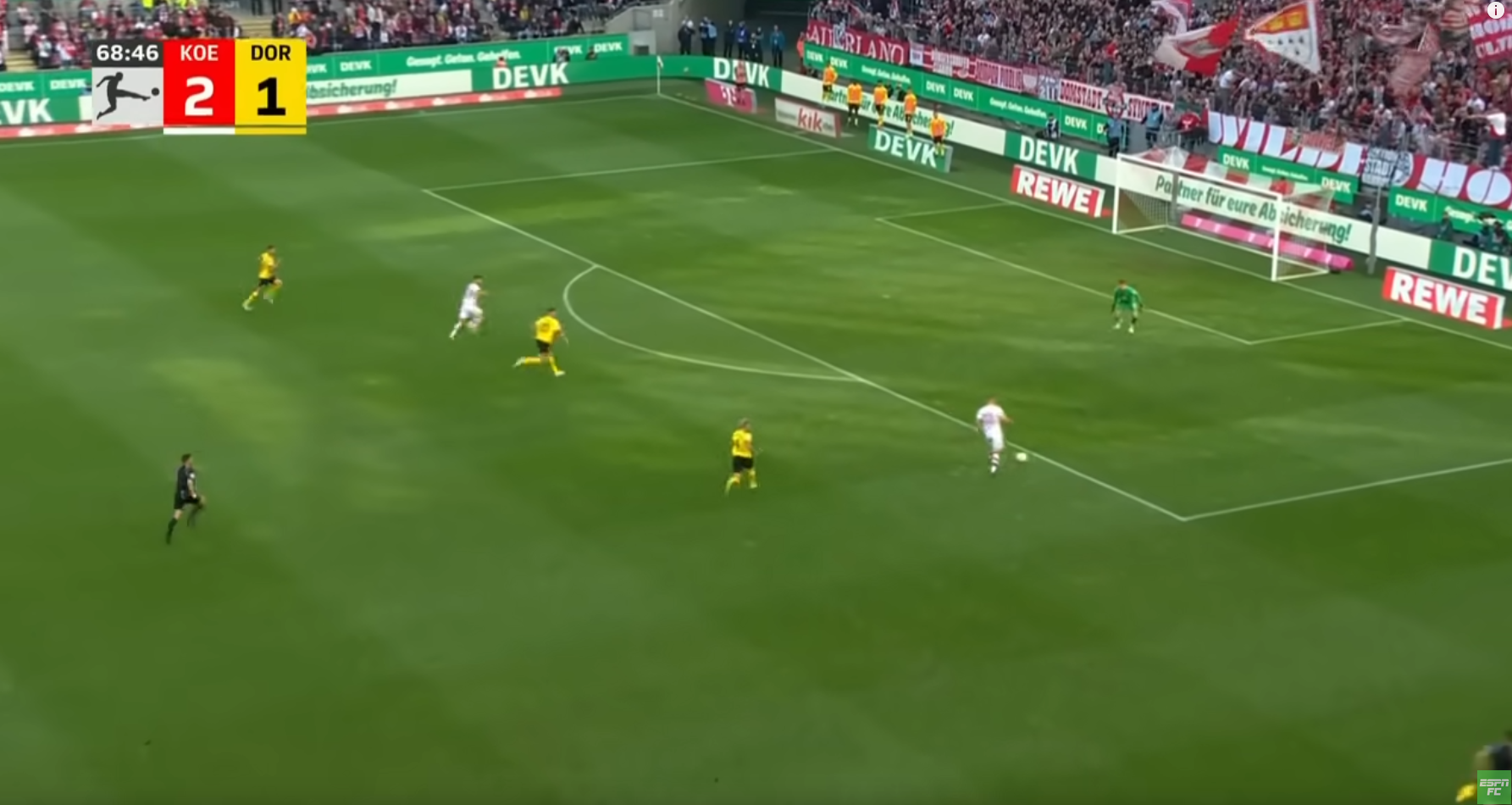 Not the ideal before/after | ESPN/YouTube

The shot clatters off the inside of the post. The alertness to this long ball, the positioning, the pace and the recovery angle — all hugely concerning for a Germany team with nightmares of getting hit on the break dating to the 2018 World Cup.

Now for Köln's third goal, one which Dortmund fans won't want to relive: 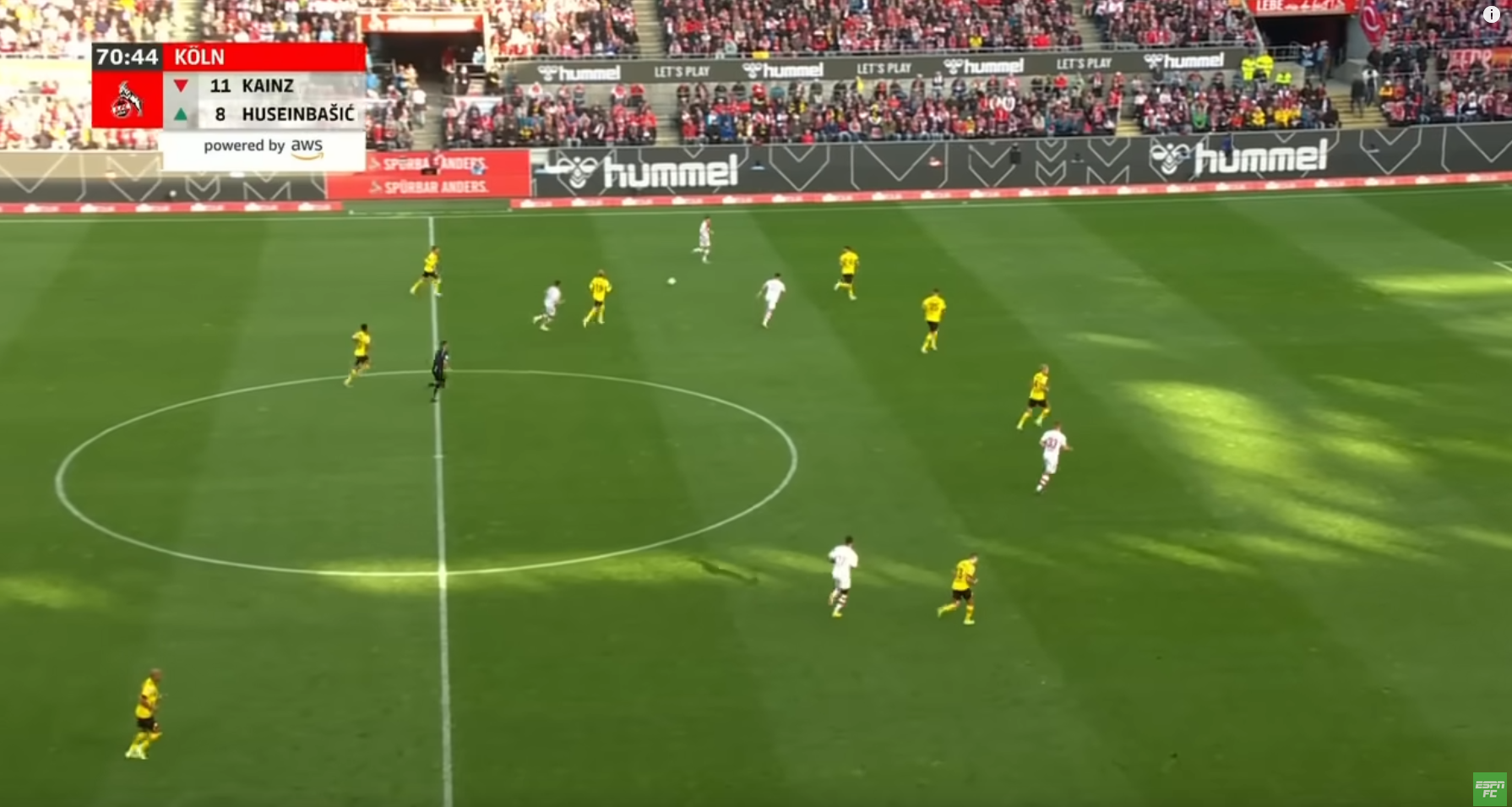 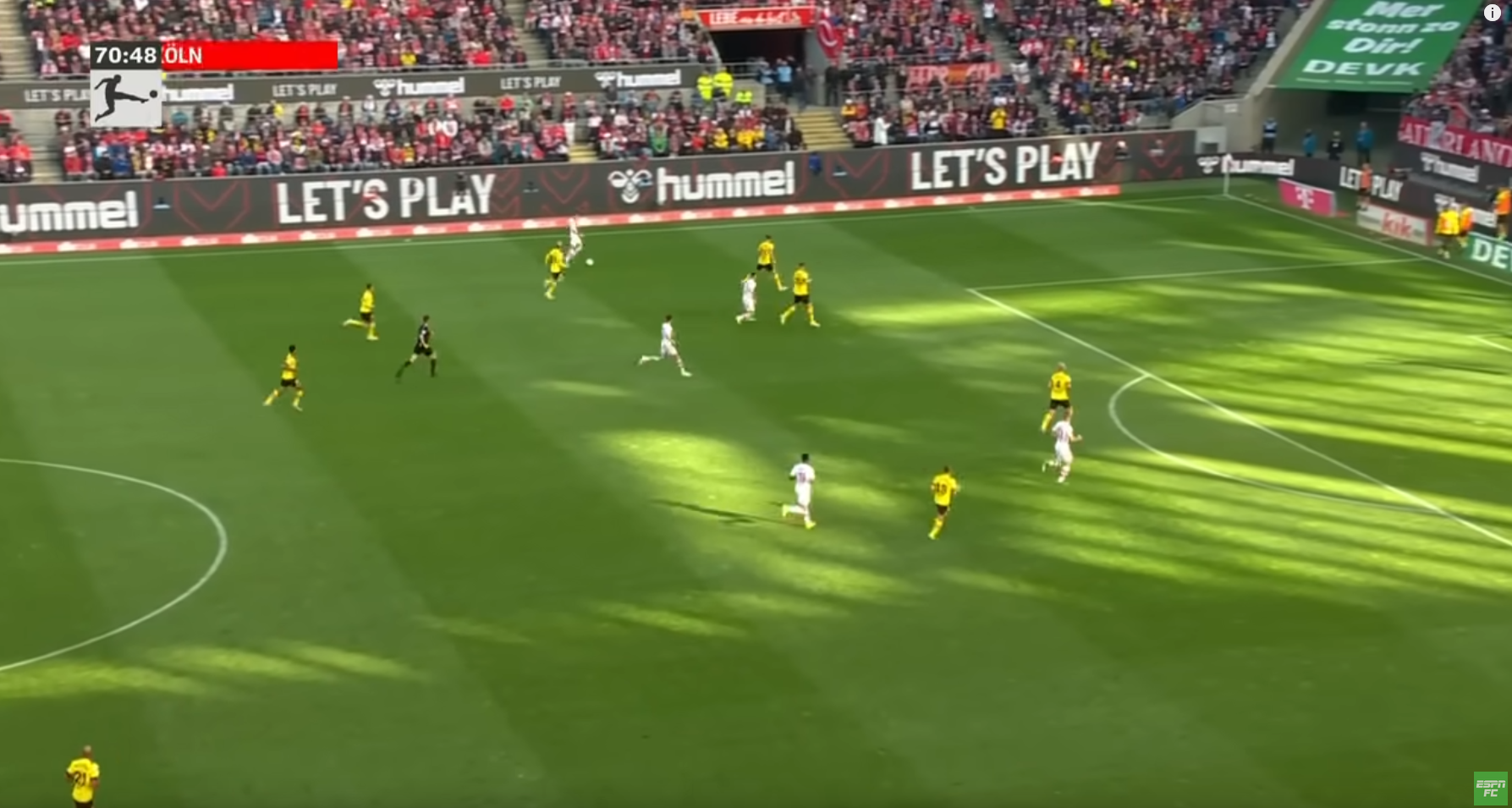 Nobody tracks the midfield; a backline gap develops too easy | ESPN/Youtube

The Bees were very much in the game at this point, but not after this play. Without Özcan, there was no natural six and this is perhaps just as damning of the midfield — one that includes England wonderkid Jude Bellingham and Germany international Julian Brandt — as two of them calmly trail the developing threat of a runner out of the Köln midfield.

Still, the center-back pairing look remarkably out of focus and switched off to the situation, which is much closer to them. Köln aren't exactly putting all the moves on them, but they still part like the Red Sea — inviting the goal-scorer to shoot through a ludicrously-sized gap, unmarked, and score.

Dortmund now sit fourth in the table, a 5-0-3 record, as they head into today's Champions League match against La Liga's Sevilla. It will be a big litmus test — as will be their response to their Bundesliga struggles.

Bayern are of course no strange to choppy waters this season; their four-game winless streak in the league was the likes of which had not been seen in Bavaria some two decades. It prompted searing internal critiques, soul-searching, and now, a renewed resilience.

Will there be the same at #SecondPlaceConfirmed? Recent history is not so kind. Dortmund have collapsed in their Bundesliga title challenges time and time again, even in pole positions. Regarding periods like these, there feels almost an air of inevitability and acceptance — that this is just life in the Bayernsliga.

But while the gap in finances between the two clubs is stupendous, so too is the gap between Dortmund and many of the rest. They may justifiably have difficulty holding a candle to the Rekordmeister's excellence, but demonstrate enough of their own quality over everyone else and the table should still be a tight race between them.

The season is early, and a tight two-horse race may still emerge. It would be a nice thing — for the Bundesliga, for Germany, even for Bayern — if it did.

What will the future hold?

Dortmund's last pair of young, touted center-backs faded without much fanfare. Manuel Akanji (27) — well, okay, he got picked up by Manchester City but was allowed to leave on a free. Dan-Axel Zagadou, still just 23, also left on a free and is now at VfB Stuttgart. Their last round of big signings of young German talent — well, perhaps it's best not to go there.

It would be nice for Süle (27) and Schlotterbeck (22) to escape the same fate — but that might mean an environment that develops fundamentally different characteristics than it has now. They are both fine talents; mere months ago, many fans lamented Bayern's inability to get or keep them both in Bavaria, and last year both looked fantastic — utterly vital to strong, energetic teams.

Now it's up to Dortmund to show they've got the right stuff. If not, there are other players to monitor — among them Leeds United's Robin Koch (26) or Southampton's Armel Bella-Kotchap (20). If the Bundesliga cannot provide the crucible required to forge new defensive steel, the Premier League might be happy to oblige.