Hello guys, I will answer the question "Is Lionel Messi to Bayern a good idea?" (btw, I have no idea if it is a good idea, I am doing this as I write)

1. The cost of Messi

It has been rumored that Messi is willing to take a 50% pay cut compared to his previous salary, which would amount to around 70 million euro a year. Given that Messi wants to play in the MLS, Bayern may not need to give him a long term contract, which eases some of the concerns with his age.

Messi is also a free transfer and wouldn't need Bayern to pay an investment, which is also good considering he is an older player.

There are certain attributes of Messi which are not usually found in players and one of those is an exceptional marketing power. Through studies done by experts, Messi could generate an additional 35 million euro in the first year alone. (16M shirt sales, 5M social media, 14M increased ticket prices). This would reduce the cost of Messi's salary by half. Those are the just the explicit values. Messi is adored by fans in South America and in Asia and could contribute to an expansion of Bayern in those areas. Plus, Messi will inevitably attract better sponsorship deals and give Bayern a better platform of attention. This will also in turn benefit the Bundesliga.

2. Is Messi cost-effective on the pitch?

In other words, is Messi giving Bayern good quality for their money?

We can compare Messi's value per price to some of the other Bayern players.

Whoscored.com's algorithm gives a rating that is indicative of a player's value generated by statistical performances. Since the average rating is 6.6, we will take the values above that because a player below average is not worth buying. This table shows the value of players based compared to their salary. 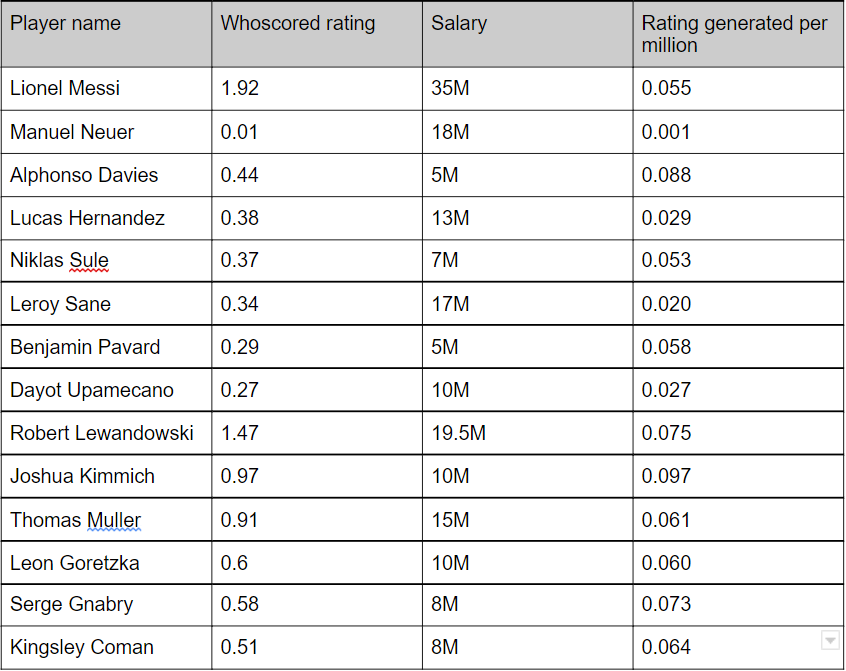 Amongst the 14 players, Messi is the 9th most cost-effective player. This means that the average Bayern player is more cost-effective than him. If we take into account Joshua Kimmich's new contract, Kingsley Coman's demands for a pay rise and Goretzka's pay rise, he would be more cost-effective than the average Bayern player.
Conclusion
Bayern should not sign Lionel Messi because although he is the best player in the world, his wages would be too high to make him a good signing.