The final was a tight contest in which both teams struggled to create concrete chances courtesy of some fantastic defending on both ends of the pitch. In the end, Bayern’s grit and coach Hansi Flick’s tactical brilliance made the difference, as Bayern became the first club to register a 100% win record in a single UCL campaign.

Through this win, Hansi Flick proved why he is a notch above the rest of the managers in Europe. Here’s a tactical breakdown of his master plan that helped Bayern win the most coveted trophy in Europe.

Gegenpressing has been the most effective phase of Bayern’s play. In the final, this phase was carried out by players closing down vertical-passing channels in PSG’s half.

Bayern’s attack and midfield moved as a unit throughout the match and overwhelmed PSG’s players in their half. As a result, PSG’s core struggled to play under pressure in the first half of the match and often gave up the ball.

On account of their lack of vertical passing lanes, PSG’s players at the back were forced to use long balls to bypass the press. As Leon Goretzka, Thiago and Niklas Sule were in the right position to intercept those passes, Bayern won the ball back with ease and limited PSG to a long passing accuracy of 54% (FBref).

Thomas Muller and Robert Lewandowski weren’t involved in a goal for the first time in this Champions League campaign. But was this an indication of a poor performance by the duo?

No, and the proof lies in the counter-pressing phase of the game. Müller and Lewandowski were absolute monsters in this phase and gave their all to win the ball back for their team. During PSG’s buildup, Müllandowski targeted PSG’s double-pivot to stymie their vertical progression and forced their back line to go long.

Müller, an attacking midfielder, was the final’s best defender as he won 5 (!) out of Bayern’s 13 tackles and applied a game-high 35 pressures. His partner-in-crime was equally involved: Lewandowski won 4 fouls for his side and applied 27 pressures on opposing players.

Bayern’s display in the defensive phase of the game was a testament to Hansi Flick’s wit. Regardless of Joshua Kimmich and Jerome Boateng’s positioning, one thing was clear going into the match: Kylian Mbappé and Neymar would beat them by making dangerous runs in-behind the defense. Therefore, Hansi Flick let Kimmich play in his usual role at right-back and found other ways to keep Mbappé and co. at bay.

Kimmich frequently moved upfield to enhance the team’s counter-pressing and provide his attacking input. But to prevent the defense from being outnumbered in transitional phase, Bayern maintained a three-man back line in the first half. While Kingsley Coman wreaked havoc on PSG defense on his own, Alphonso Davies played a relatively conservative role and focused on making efficient attacking runs.

For the vast majority of the first half, Bayern were able to neutralize Mbappé and Neymar’s threat by winning long balls intended for the PSG attackers. If the Bayern press was bypassed, Flick’s reactive plan was simple and effective — slow down the ball carrier and quickly get behind the ball.

In the second half, PSG binned their initial plan of using long balls and started playing vertical passes to penetrate Bayern defense. In this case, the Bayern defenders, in particular David Alaba, cut off the passes intended for attackers. In the second half, Bayern made 7 interceptions as compared to 4 in first half (Whoscored).

Perhaps the most astonishing part of this phase was that Bayern players looked well-prepared for PSG’s counter-attacks. The players were aware of the attackers’ movements and were ready to sprint back to keep up with them. Despite allowing PSG to record an xG of 1.8, the Bavarians successfully prevented PSG from scoring through a combination of collective defending and individual brilliance.

Bayern midfielders Goretzka and Thiago delivered one of the best performances of their careers in the final. With a combined 5 blocks, 3 interceptions and 21 recoveries, Bayern’s midfield pivot was crucial in winning the ball back for the team.

Just as we predicted in our preview, Bayern were able to exploit PSG’s midfield, which lacked a cohesive and robust structure. PSG’s midfield had no plan to control the game and remained unsettled in the face of Bayern’s counter pressing. As a result, midfielders Goretzka and Thiago totally dominated PSG in their half. 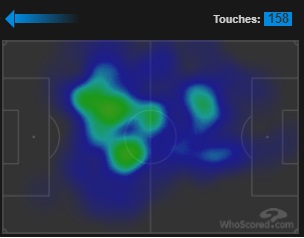 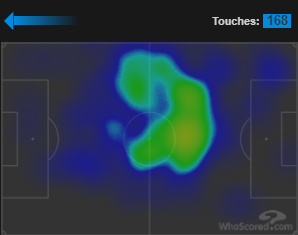 When Bayern played out from the back, Bayern’s double pivot moved together as a unit to escape PSG’s counter-pressing. Apart from a few nervy moments, the duo’s combined dynamics and smart positioning helped Bayern progress the ball under pressure.

Thiago was often found dropping deep to pick up the ball from Bayern’s back line. Goretzka, in contrast, assumed a more dynamic role in the buildup as his off-the-ball movement opened up spaces for attackers moving between the lines.

In the second half, PSG focused on forcing Bayern to move the ball in the dreaded U-shape. As a result, Bayern’s vertical ball progression came only after turnovers of the game.

Even if PSG positional discipline improved somewhat, their midfielders still showed deficits in positional awareness. As Angel Di Maria and Mbappé swapped positions, Flick made slight adjustments in his setup and gave Kimmich the freedom to drift into the midfield. Bayern’s lone goal came as a result of PSG midfielder’s poor positioning and Flick’s tactical adjustment.

In both the halves, Flick instructed his players to overcrowd the box. Goretzka’s late runs caused PSG’s center-backs to lose their man and even form an ineffective U-structure, while Bayern were able to create danger by crossing the ball into the box.

Bayern’s Champions League final win was a display of Hansi Flick’s intelligence and attention to detail. Although it wasn’t a classic demolition, with their attacking creativity and off-the-ball movement, Bayern’s attackers never let the PSG back line settle into the game. In contrast, Tuchel’s side lacked ideas in the final third as they relied on Neymar and Di Maria’s brilliance to create attacks.

The difference between the attitudes of Bayern and PSG’s players was also visible. Whereas Neymar and Mbappé went down at the slightest of touch, the Bavarians played with a fighting mentality, focused on getting the job done. The players gave their all till the very last minute and fully deserved the trophy.

With this win, Bayern’s amazing 2019/20 season comes to an end. Next season, the Bayern machine will be adding Leroy Sané and (re)integrating Lucas Hernandez and Niklas Sule to the squad, among others. For a team filled with top players in every position and managed by a coach like Hansi Flick — sky’s the limit.