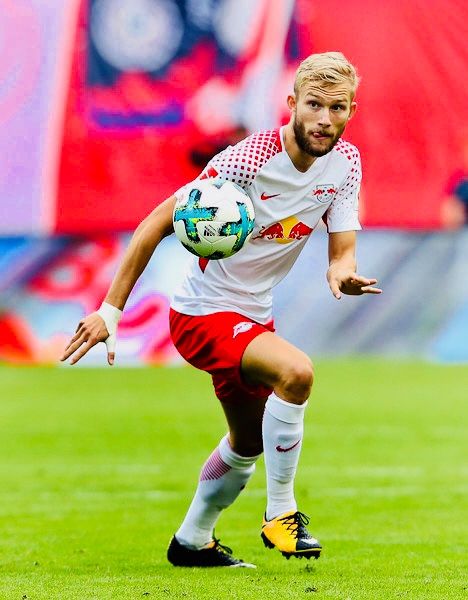 Konrad Laimer (22, right-footed) has established himself as an indispensable member of the RB Leipzig squad under head coach Julian Nagelsmann this season. While the rest of Europe is talking about Timo Werner and Dayot Upamecano, the RB Leipzig midfield general’s work has so far gone under the radar and is playing an equally important role in winning midfield battles for his team this season.

Ralf Rangnick used him mainly at RB in his debut season (2017/18) and deployed him in a variety of positions(LM, RM, CM, RB, DM) in his second season. However, under the newly-appointed head coach Julian Nagelsmann, he has started his 33 out of 34 games in the center of the midfield this season.

In this article, I’ve analysed key aspects of Laimer’s game and what makes him so important for Leipzig :

(Note : Dear reader, due to limited functionality, I have provided a link to Imgur album below an observation instead of posting all the Gifs. Please feel free to check out the rest of the instances. Photo captions are written in italics.)

Julian Nagelsmann has deployed Laimer as 6/defensive midfielder in a double pivot in a 4-4-2 or 3-4-3/3-4-1-2 set up or as 8 in a 4-3-3 formation this season. Laimer is a double pivot specialist. He primarily plays as a destroyer DM who is responsible for shielding the defense and winning the ball back for his team. In some cases, Nagelsmann has also deployed him as sort of a "connector" midfielder, a position in which he occasionally places himself behind a wave of pressers where his job is to connect defense to offense by receiving the ball from the back and distributing it to the attackers. 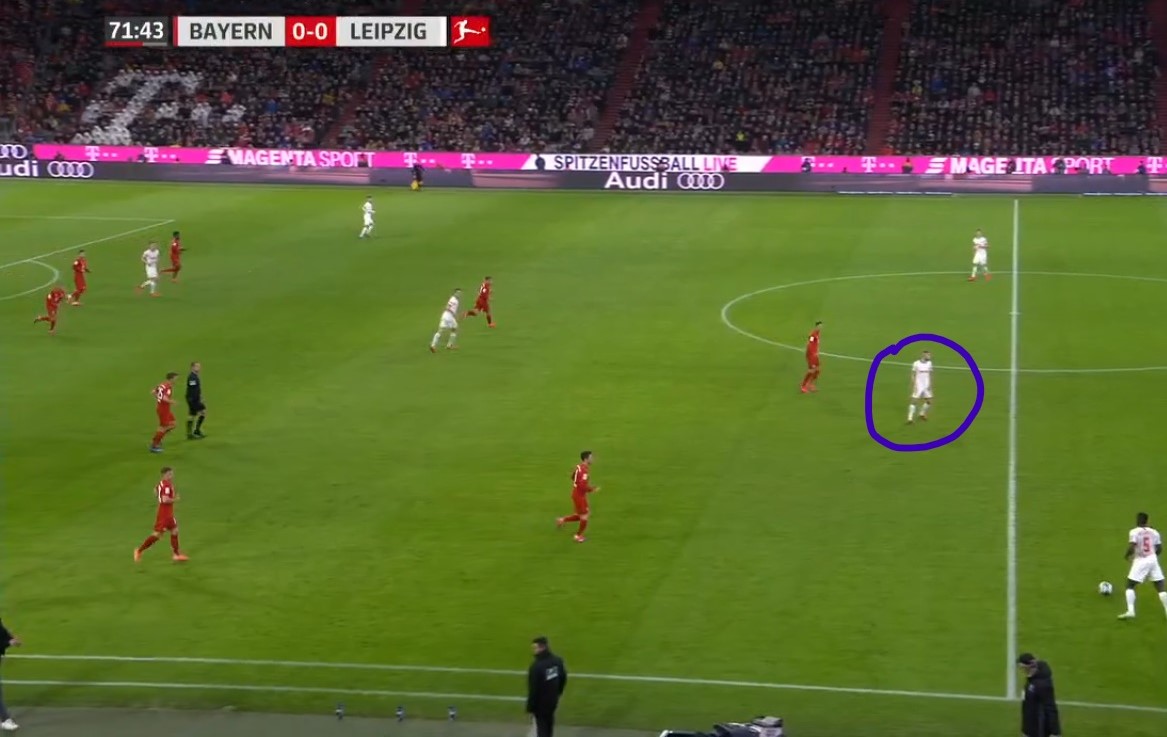 Laimer's positioning in a "connector" role

Against Dortmund, Nagelsmann deployed him at 8/LCM position in a 4-3-3 setup. However, both of Leipzig's 8s in that game, Laimer & Sabitzer, struggled in their roles which caused Leipzig to press poorly. Laimer was restricted in his role as he wasn't able to roam freely to win the ball and was only allowed to operate on the left side of the field. Nagelsmann realised this and changed his team’s set up to the usual 4-4-2 with Laimer and Diego Demme forming the midfield pivot at HT which improved Leipzig’s pressing and positional play in the second half.

Laimer performs at his best when he is deployed alongside Sabitzer in a double pivot where Sabitzer plays the role of defense-to-offense connector/ball distributor and Laimer as destroyer DM. In this system, Laimer is responsible for supporting the center backs in the buildup and winning the ball back for his team.

Laimer is crucial to Nagelsmann’s side when it comes to winning the ball back. He is physically strong and has great stamina and balance. An important player in Nagelsmann’s counter pressing system, Laimer uses the combination of his physicality and defensive skills while pressing opponents throughout the game, helping his team win the ball back by blocking passing lanes or giving his teammates time to reorganise themselves by slowing down attacks.

His ability to contain opponents and excellent defensive skills like tackling, interception skills makes him the perfect destroyer DM for Leipzig. While trying to recover the ball, Laimer positions himself behind a possible pass receiver from the opposition team. As soon as the player is about to receive the ball, Laimer starts running towards him, presses and tries to win the ball by forcing the player to take a bad touch or execute a bad pass.

Wins the ball from Dele Ali

Laimer positioned behind a possible pass reciever (Goretzka in this case)

Laimer doesn't generally defend much inside his team's box and just stays at the edge of the box (keeping track of a player who can possibly make a late run in the box) or simply moves to the side where the ball is being played and starts pressing. This is because Nagelsmann deploys zonal defending where CBs are supposed to block crosses & mark players inside their respective zones in the box. If, however, Upamecano or Klostermann is caught out of position, Laimer moves into his zone to fill that gap. Besides center backs, Laimer also covers the gap left by his team’s full backs when they move out of position.

Upamecano caught out of position ; Blocks Hakimi's shot by moving into Upamecano's zone

While Laimer doesn’t have Javi’s build, he is an extremely tough guy. It’s amazing how he doesn’t get injured when he is always using his body to press and defend. He hasn’t missed a game this season because of injuries. Moreover, he has that "fighter" mentality. He is always pressing, covers a lot of ground and quickly gets behind the ball.

Laimer is the kind of player who prefers to make a safe, direct pass. However this doesn't mean Laimer is incapable of providing dangerous balls to attackers. Players like Upamecano, Sabitzer, Nkunku are generally responsible for providing diagonal long balls and incisive passes to Leipzig attackers. But Laimer has also shown he can help his side hit the opposition on the break by executing such passes.

Over the top assist to Mukele's goal

While his primary task is to defend, Laimer is more than capable of carrying the ball by himself into the final third. Moreover, he has great burst speed and can carry the ball under pressure.

Occasionally, he makes a half space run when his team attacks and quickly comes back to his usual position. Through this, he helps his team by presenting himself as an extra attacker or by attracting a defender, which in turn frees up or creates space for another attacker from his team.

Half space run in the buildup to Timo Werner's goal

Laimer never tries to make a fancy pass/skill/dribble. He does his job in an efficient and simple manner.

The way Laimer positions himself when his team is in possession as well as when his team is trying to win the ball back makes him indispensable for Nagelsmann’s side and a reliable teammate. When Leipzig starts playing from the back, Laimer presents himself as a passing option for CBs. He can receive the ball, turn quickly and pass the ball upfield even when he is under pressure.

Quick between his feet, Laimer passes the ball upfield under pressure

When his teammates attack, he sets himself in a deeper position than his teammates, presenting himself as a safe passing option for attackers and redistributes the ball from that position.

A safe passing option for attackers, passes the ball to Mukele on opposite flank

If his team loses the ball in the final third, he remains in the right spot to win the ball immediately or apply pressure to give his teammates enough time to get behind the ball. He is always the last man/last defender when his team takes free kicks or corners.

His excellent chemistry with his double pivot partner (often Sabitzer, sometimes Tyler Adams) is important to Leipzig's system. When Sabitzer is out of position, he stays back, shields the defensive line and tries to contain the opponent. When Sabitzer is in the position to cover for him, he moves out of position to win the ball. While pressing, both combine in such a way that they are able to block progressive passing lanes of the opposition.

Laimer and Sabitzer often combine in the middle to move the ball upfield through vertical passing. As we have seen before, Laimer can receive the ball from the back, pass it to Sabitzer (or Adams), who can carry the ball into the final third and/or distribute the ball to attackers.

How Laimer could fit into Bayern Munich’s first team:

There is a high chance midfielders Corentino Tolisso and Javi Martinez will leave the club this summer. Bayern has no shortage of 8s with Thiago, Kimmich, Goretzka, Cuisance all capable of playing in that position. However what Bayern truly needs (in midfield) is a destroyer DM and Laimer (valued at 24mil) would be the perfect player (& Javi "the wall" Martinez replacement) for that spot. In the past, Thiago has suffered when paired with players like Vidal, Tolisso, Sanches Goretzka because of their positional indiscipline. Laimer would be the perfect double pivot partner for Thiago/Kimmich and destroyer DM for Bayern. If he works on his fouling discipline and starts distributing the ball carefully, I would even go as far as to say he can become a complete midfielder. His intelligent pressing, willingness to protect his team's defensive line, fighter mentality, pinpoint tackling, the ability to win the ball in any part of the pitch as well as great ball-playing skills makes him a player who would easily fit in at Bayern.

Thanks for reading! Mia San Mia!