Former Bayern Frauen player Amber Brooks returns on loan to the reds until the beginning of the 2015 NWSL season.

Share All sharing options for: Amber Brooks Returns to Bayern Frauen On Loan

According to both Bayern Munich Frauen and the Portland Thorns FC, midfielder Amber Brooks has been loaned to Bayern until the start of the 2015 NWSL season. Brooks had previously played for Bayern during the 2012-2013 and 2013-2014 seasons.

The American midfielder joined Bayern Munich Frauen after the completion of her college career at the University of North Carolina. She immediately became a valuable part of the team, scoring 10 goals in 22 appearances during her time with Bayern.

Brooks joined the Portland Thorns full time in 2014 and had two assists in 20 league matches this season. The 2015 NWSL season begins in March, so Bayern will not have Brooks for the entire Frauen-Bundesliga season. Having Brooks back in Munich will be a very welcomed addition to this squad that lost many veteran players during the offseason. Watch for Amber Brooks to provide a spark for the Bayern Munich Frauen this season. 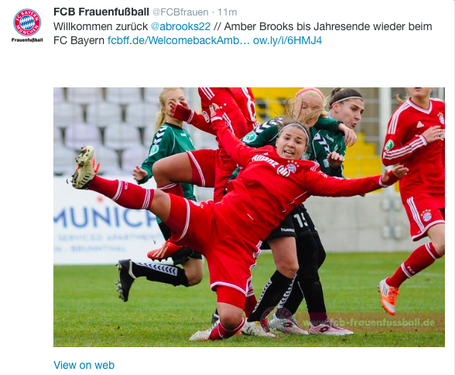 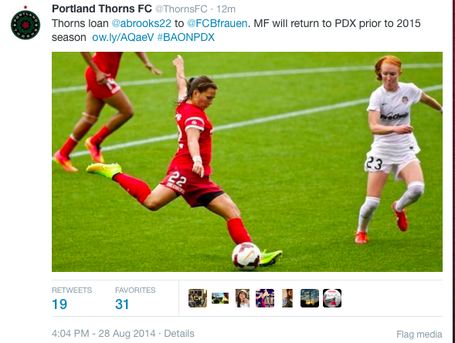