Gianluca Gaudino laid down an impressive Bayern Munich debut, but there's reason to still be tepid

In some ways, Gianluca Gaudino is light years ahead of many Bundesliga players. In other ways, he looks like a 17-year-old kid. We break down some parts of his Bundesliga debut against Wolfsburg.

Share All sharing options for: Gianluca Gaudino laid down an impressive Bayern Munich debut, but there's reason to still be tepid

It's hard to get more impressive on your Bundesliga debut then Gianluca Gaudino last Friday. At 17 years, nine months, and 11 days of age, it wasn't the earliest Bayern MUnich debut by age, but it may have certainly been the most impressive. Which considering that company keeps with Pierre Hojbjerg, David Alaba, and a certain recently departed midfielder who-shall-not-be-named, it's good company to be in.

More then just the people surrounding that particular feat, it's the on pitch performance he laid down after an impressive preseason that shows just how valuable Gianluca Gaudino could be to this Bayern Munich team this season. You don't even have to look much beyond his stats to see what he can bring to the table. 90 minutes played: 64 touches: 59 passes attempted at a 97% completion rate. For a pure distributing midfielder, it's hard to get much better then that after 10 years of Bundesliga experience and he hasn't even stopped growing yet. 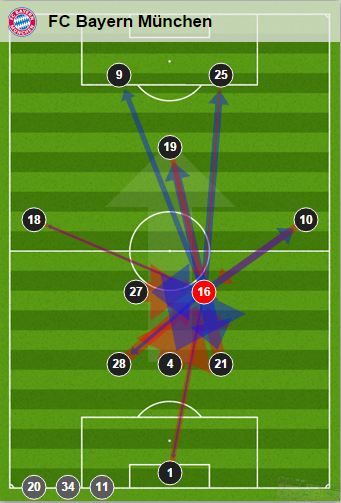 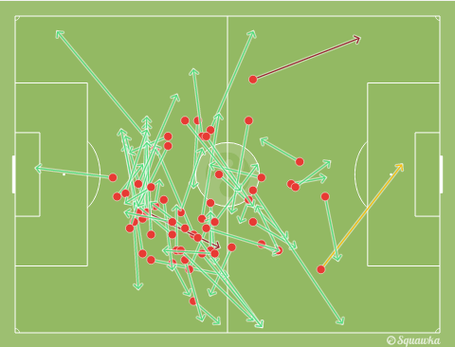 Even looking at his directional passing map from the match, Gaudino was an impressive shuttling influence in midfield content to shift the ball in all directions in a partnership with David Alaba. While Alaba certainly filled the more risk taking role, we can see massive involvement from Gaudino in rotating possession through the defense and being that main distributive linkup in moving the ball forward.

Looking further at his passing map, we see a good bit of lateral passing in a zone just outside the Bayern Munich box. Given this is the area where distributive midfielders start play from it shouldn't be a surprise to see a great degree of lateral passes here to the other main distributive elements of the Bayern Munich system, the central centerback and the defensive midfield partner. However, the rest of Gaudino's passes all show a remarkable propensity to drive play forward, shifting the ball out right to the main creative outlets in Philipp Lahm and Arjen Robben, or into attacking midfield and Mario Götze.

However, what we don't see is the capacity for risk taking evolving yet. The majority of his passes are in the Bayern Munich half the field, and only rarely does he become involved in the offensive phase of play.

There's also significant concern attached to playing any 17-year-old and a huge piece of that was born out as he didn't register a single tackle or  interception. Ordinarily that kind of criticism comes with an opportunities caveot, but considering his defensive midfield partner David Alaba registered a combined total of 5, it's clear the defensive work was there needing to be done. Furthermore, he registered only a single foul for and against indicating a decisive lack of physical gameplay. Which considering the age and his very small frame, that shouldn't be unexpected.

All things considered, it was an impressive debut for any Bundesliga talent. It was even more impressive considering Gianluca Gaudino's birth certificate. It remains to be seen just how long he'll remain with the Bayern Munich first team as the technical skills and read of the game are there. The evolution of risk in his passing game will be both the biggest challenge, and the most crucial to his continued stay in the Bundesliga. With somewhat pedestrian distribution, it will be easy for teams with better organized defenses then Wolfsburg (re: Borussia Dortmund (and not DFL SuperCup Borussia Dortmund)) to anticipate and read the Bayern Munich gameplay.

Either way, we're in for some fascinating months ahead with Gianluca Gaudino.