The Bavarian Football Works community has selected Arjen Robben as their man of the match.

On Saturday, we selected Arjen Robben as the Man of the Match following his one goal, one assist performance on Friday against VfL Wolfsburg. Thanks for agreeing with us, ye minions!

Arjen Robben was also your man of the match earning an aggregate rating of a whopping 4.86 on the Bavarian Football Works rating scale. With a top score of 5, it's indicative of just how vital he was to the Bayern Munich attack on Friday. 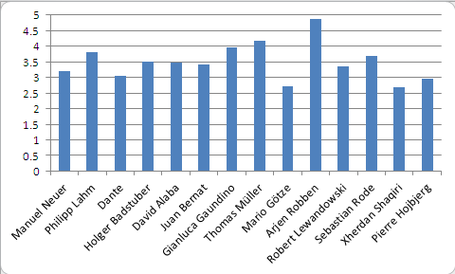 The other standouts for Bayern Munich included the always impressive Thomas Müller who was the only other player to rank in the 4's between above average and exceptional. However, quite possibly the player who exceeded the most expectations was 17-year-old Gianluca Gaudino who made an extremely impressive Bundesliga debut for which you gave him a mean rating approaching 4. Ranking up there as well was Philipp Lahm, who renewed his time in the backline with an impressive shift on the right side of defense.

On the opposite side of the spectrum was Mario Götze, who the community ranked the lowest of the starting eleven with an mean score of 2.73. In all fairness, it was a somewhat tepid performance from Mario Götze and not up to his usual standards of play.

Among the substitutes the clear standout was Sebastian Rode who came in for Robert Lewandowski, who had a fine first Bundesliga appearance in a Bayern Munich uniform.