How much rest should Bayern Munich give Bastian Schweinsteiger after the 2014 World Cup final?

Bastian Schweinsteiger is on a three-week vacation but the team doctor is advising for a longer break. Where should the chips fall?

Share All sharing options for: How much rest should Bayern Munich give Bastian Schweinsteiger after the 2014 World Cup final?

Bastian Schweinsteiger had a rough season last year. A preseason surgery to remove bone spurs in his ankle gave way to a longer then expected healing time and surgery complications that cost him most of the Hinründe.

Then, coming out of the winter training camp, tendon issues in his knee cost him another month of the season before yet another knee injury cost him the his spot for the DFB Pokal. All in all, it was a series of repetitive injuries that kept occurring limiting him to 36 appearances on the season and cost him valuable training and game time in the lead into the 2014 World Cup.

So, when the 2014 World Cup final happened on July 12th, we were treated to such wonderful images of the Bayern Munich vice-captain. 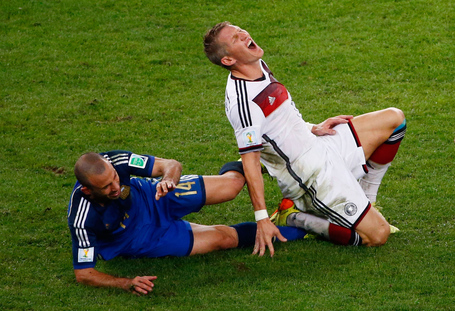 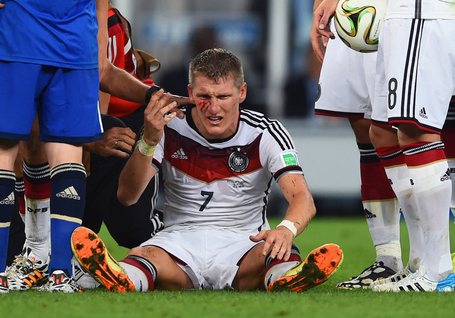 It's a nice way of saying that Argentina beat the living hell out of Bastian Schweinsteiger, who was a monster for the German national team in holding midfield. However, as Bayern Munich fans, I'm sure most of us were just ticking the foul boxes in our mind, as 90 minutes stretched into 120, approaching the inexorable conclusion that Bastian Schweinsteiger was going to need a very long rest

We knew vacation was going to be part of the equation, so that gave us two-plus weeks. Now, according to BILD, Bayern Munich's team doctor Dr. Hans-Wilhelm Müller-Wohlfahrt (Yes, this will always be written out, because it's tons of fun to read/say.) is saying that Bastian Schweinsteiger should be given six weeks off - a full six-week vacation!

While the team is idealistically targeting a return date sometime early in August prior to the DFL SuperCup and the start of the competitive season, the doctor's recommendations put his return to the squad at the first week of the season. The real question is who is going to win?

From a personal standpoint, I'd like to see Schweinsteiger on August the 6th in Portland, but that's mainly because I subscribe to a Hobbesian view of the universe. I recognize that's probably futile, so the next best alternative would be a full six weeks of relaxation and recovery for Schweinsteiger. Bayern Munich don't need Bastian right away.

So, lets take a look at what a six week vacation would look like. That would put Schweinsteiger returning the weekend of the match against Wolfsburg. He'd most likely miss the second matchday against Schalke as well and be match fit by the first week of September.

On the flipside, a three week vacation brings Schweinsteiger back just in time for the MLS All-Star game, and still with enough match fitness that he could be ready to go for the DFL SuperCup. However, it's more likely that they'd rest him for that match as well as the opening match of the DFB Pokal. With that fact in hand, once again the question comes down to whether or not Bayern need him for those first two matches against Wolfsburg and Schalke.

With the first two Bundesliga matchdays against Champions League opponents in Wolfsburg and Schalke, having the 30-year-old vice-captain would be an enormous boon, but an absence Bayern could get over. Especially considering from there on out, Bayern Munich don't have what could be considered a tough league fixture until the last weekend of October against Mönchengladbach. While they're still missing Thiago, they also now have Sebastian Rode. If either of those matches require Bastian Schweinsteiger's tenacity, along with defensive and passing ability, Sebastian Rode is a more then capable replacement who is completely up to the level of play required in those matches.

Give Bastian Schweinsteiger his full six weeks. Bayern Munich need him completely healthy when the season gets into full swing.