Bayern opened their preseason with a 3-0 victory.

Share All sharing options for: Holger Badstuber returns to the field in Bayern Munich's friendly win

Today marked the first preseason match for Bayern Munich in the 2014-2015 season. The club traveled to Memmingen to face fan club Red Baroons in a "Dream Match". While the 3-0 victory doesn't mean a lot in the big picture, something did occur in the match that deserves all of the praise that can be given.

Captain @Badstuber leaves the pitch after 58 minutes. Great comeback, Holger! #Schwarz is on in his place. pic.twitter.com/n3TbRLZRr2

Yes. We witnessed the return of Holger Badstuber to the field for the first time since December 1, 2012. Badstuber wore the armband on the day, as the match took place in his hometown. Badstuber showed a lot of faith in his twice surgically repaired knee by outrunning several opponents and making sharp cuts on that leg. Playing without fear going forward is very important for Badstuber, and he took a big step today toward making his way back onto the field for Bayern in a competitive fixture.

As for the match itself, Pep Guardiola only had seven first team players at his disposal on the day. Badstuber, Tom Starke, Rafinha, David Alaba, and Pierre Hojbjerg alongside newcomers Sebastian Rode and Juan Bernat all found their way into the starting lineup. They were joined by four members of the club's U19 team: Daniel Hägler, Michael Eberwein, Gianluca Gaudino, and Lukas Scholl.

Where was Robert Lewandowski? The club stated that he would miss the match with a minor knee issue. There is nothing to worry about here, they assure us.

The formation that Guardiola deployed was similar to the formation used by the club in the DFB Pokal Final victory over Borussia Dortmund. 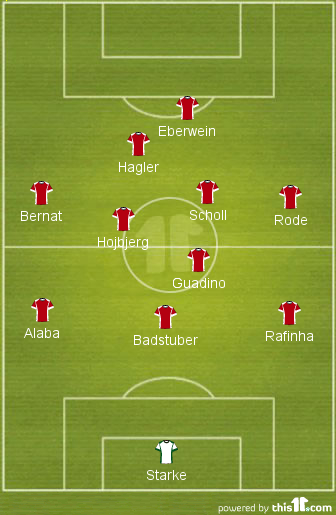 The match went roughly how you expected it would. Bayern controlled the contest, rarely allowing Red Baroons to threaten Starke. All three Bayern goals came in the first half. Alaba scored just a couple of minutes into the match with a very nice shot from distance. Hägler made it 2-0 ten minutes later with a tidy finish after slipping through the Red Baroons defense.

Alaba added the third in the 37th minute with a free kick. It appears as though the shot should've been saved, but all goals do count the same right?

Some other takeaways from the match:

Here are the full highlights: