Skip to main content
Reminder Our postgame review of Bayern Munich's HUGE win over Mainz is live! Click to listen to it on Spotify!

Set piece marking was the ultimate doom spell cast on Bayern Munich on Tuesday. And it was probably doomed to fail from the beginning.

Down 1-0 on aggregate approaching a second leg at home in the UEFA Champions League semi-finals? That's a pretty good position.

Shipping a set piece goal inside 10 minutes of the second leg? Not good.

Shipping a second set piece goal inside 20 minutes to put the aggregate score at 3-0? That's a nightmare.

And just like Manchester United showed in their aggregate loss to Bayern Munich, defending set pieces is without a doubt one of Bayern Munich's biggest weaknesses. While the Real Madrid counterattacks were just as deadly on the evening, it was the early set piece goals that doomed Bayern Munich to an early and ugly fall down the hill. That Bayern Munich had to continue for 70 more minutes in the face of those two abject displays of defending was torture. Madrid piling on goals three and four on the evening felt like mere formalities in the proceedings by the time they happened. 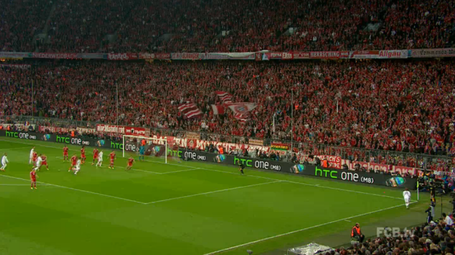 The first thing that should immediately pop out is the insistence on zonal marking during the set piece. It's one of the biggest battles still to be fought in modern football (thankfully, open play man marking went the way of the dodo a long time ago). Classical English football and many pundits are schooled in the philosophy of man-marking. Most announcers we as English speaking denizens on this planet are going to hear, prattle on about who marked the runner, doesn't this idiot know how to defend set pieces, blah, blah, blah. It's archaic, wrong, and not how Bayern Munich played set piece defense this year.  Zonal marking in this context is all about team play and team structure. So, of course Pep Guardiola uses it.

While the jury stills out on whether man-marking or zonal marking is more effective at preventing goals from set pieces, as Michael Cox noted in a fantastic review on set piece zonal marking, "the major benefit of a zonal system is that it is proactive; it covers space evenly across the danger zone, meaning players don't get dragged out of position or blocked off by opponents." That's the big key to why Pep Guardiola uses it. It's a balanced formation and with his increasing reliance on technical players to retain possession in lieu of aerial options like Javi Martinez, covering all the areas of the box is the major concern.

The vast majority of goals scored directly after set pieces aren't scored from the initial shot. While they're the one's we remember the most vividly, it's often times the second ball that's killer and what zonal marking is aimed to prevent. After the initial clearance, the defensive style relies on secondary clearances to clear zones.

In Tuesday's game, leaving players unmarked was the same final problem, only the fundamental issue was failed zonal marking itself. Straight across the 6-yard box, Bayern Munich used it's main aerial threats in Mario Mandzukic, Jerome Boateng, and Dante. Marking the central space are Kroos, Schweinsteiger, and Müller. While Modric's cross was fantastic, it was Ramos' run that gave him the necessary perspective to judge the flight path and correct while Ronaldo's almost herculean leap was just enough to fool the Bayern Munich defense as both Dante and Schweinsteiger challenged him. What's really poor though is the rest of the set piece. Boateng and Mandzukic both focus on guarding out Benzema allowing Pepe au uncontested near post run. Müller doesn't respond as Ramos enters his zone allowing a completely. Kroos does his best impression of a statue. And it's indicative of one of the main issues with zonal marking in general; that being the concept of familiarity. As we've seen all year, Pep Guardiola has not played with anything approaching a consistent starting eleven. The decision to field a lineup in zonal mark on the set piece was a fundamental flaw from the start and it cost Bayern Munich just when they needed to defend the most.