"Only bring us champagne after the 4-0, not sooner or else Bayern will score 4 themselves!"

A normal Bayern match for me this season has consisted of getting to the match a few hours early to hang out around the away block, then entering the stadium as soon as possible to get the best standing place, standing in said standing place for a good three hours total, then leaving. Definitely no food, maybe no water, and beer only when it lands on you.

Saturday began looking like another one of those days (which despite my description above, I really like and would do forever) would be unlikely, because I didn't have a match ticket. But, as a friend who was driving to the match from the Rhineland happened to have a spare seat in his car, I decided to tag along. After all, there are people who go to the away matches without tickets all the time, whether because they have stadium bans or just couldn't get their hands on one in time.

So I figured I'd bring €50, see what that would buy me if anything, and take my chances. Worst case scenario was going to a pub with the guys and gals with stadium bans or no tickets. As Augsburg play in a comparatively small stadium and are in close proximity to Munich, there were a bunch of both groups of people, which made getting a ticket even more unlikely; it seemed I was fighting all of Bavaria for one.

It was around the stadium that I asked person after person "Haben Sie noch eine Karte" more times than I can remember, all to no avail. 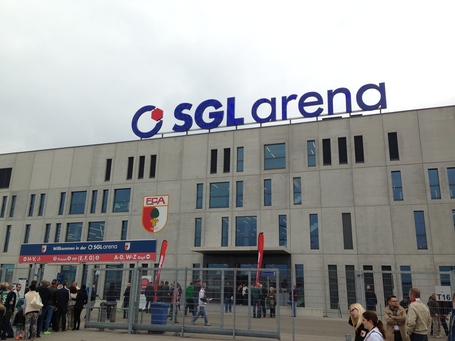 Can't win 'em all, I thought, as I gave up my search and began walking away from the stadium from that spot on the picture above, maybe 30 minutes before kickoff.

My secret was out before too long, though, that I was an American who happened to like Bayern. Both were nicely concealed at the time by a zipped-up Adidas Originals windbreaker, in the completely neutral colors or blue and teal for the match. My scarf was underneath, but that was a safety concern primarily in case I was outside the stadium alone.

At this point, I'm used to being treated like an animal when entering a stadium, but on this occasion, I was greeted at my entrance by attractive men and women in suits instead of bald policemen and barking dogs.

In the minutes before the game, we treated ourselves to a luxury buffet in a private box, where I finally took off my jacket to reveal my "Paulaner Cup des Südens SIEGER" t-shirt, which while as clever and funny as ever, was wholly inappropriate for the setting. Of all days not to wear Ralph Lauren, of all days! 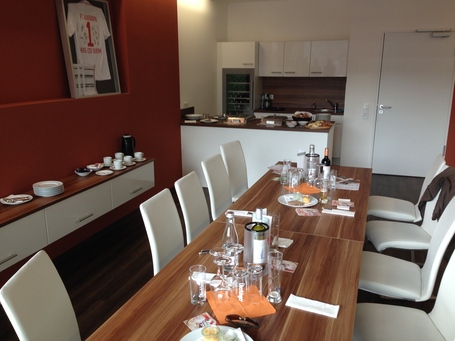 I don' t need to recap the match, that's already been done not once, not twice, but three times on the site, but I can tell you that the way Bayern treated the contest did a very good job of making me as apathetic about the result as the club appeared to be themselves.

In about the 80th minute, a waitress came down to us and asked if we wanted champagne, and the Augsburg fans literally shouted her back into the club area, convinced she had just jinxed the match.

"Only bring us champagne after the 4-0, not sooner or else Bayern will score 4 themselves!" Said the man next to me.

Everyone around me was an Augsburg fan and had been since the 2. Bundesliga days, so to see them beat us wasn't really painful at all. The joy on the faces of the fans was priceless, and after last season, it reminded me of us when our guys beat Barcelona and Dortmund in the last two rounds of the Champions League, which was nice to observe from a detached perspective.

Most near me were crying and hugging one another, or like me, were taking in the moment.

Here's a few snaps of the moments after the final whistle: 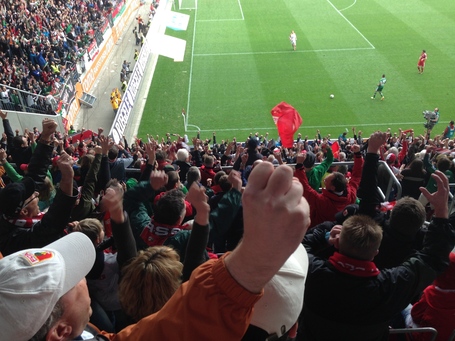 After the celebrations, I was offered champagne, refused once, until it was insisted upon, and then I joined in. Why not? Augsburg were the better team on the day, and the match means much more to them than it does Bayern. Good for them, good for them. I can just consider it the champagne I never had after the Hertha (title-clinching) match anyways.

A very special thanks to the Bircks family who gave me an afternoon I'll never forget, and one that I'll talk about for the rest of my life.