Bayern Munich failed miserably at set piece defending to give Manchester United the lead at Old Trafford on Tuesday. Here's what happened.

When Bayern Munich allowed the first goal at Old Trafford on Tuesday, it was quite possibly one of the worst displays of set piece defense they've had in quite a while. While Manchester United have always been an aerial threat that many teams have failed to cope with, Bayern Munich's issue was not so much in United being better, but in rather their coordinated and systemic failure to both effectively man mark and zonal mark on the set piece. 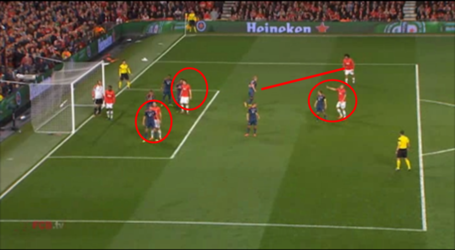 In standard set piece defense, its common practice to engage in man marking tactics against opposition aerial threats while using your extra pieces to zonal mark commonly threatened areas of the box, or runs and shots from the midfield. From the outset it was clear that Bayern Munich were opting for a hybridized approach to their defense. Thomas Müller marked Michael Carrick at the near post, while Javi Martinez did the same thing on Phil Jones at the backpost and Bastian Schweinsteiger picked up the run of Maroune Fellaini. However, it was the decision to apparently match up all 5'7" of Philipp Lahm against the 6'2" Nemanja Vidic and leave Manuel Neuer to deal with Danny Welback all by his lonesome that was the most puzzling. It's even more puzzling given that the aerially proficient Jerome Boateng is just chilling off Thomas Müller's back shoulder. As Bayern Munich are already at a height disadvantage with the taller Manchester United, you'd expect one mismark or open man, but not two. 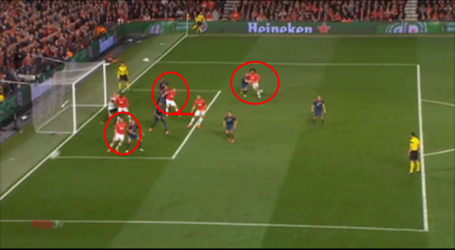 When the kick is delivered by Wayne Rooney, Nemanja Vidic's makes his run into the box completely unmarked and unchallenged. Philipp Lahm is actually playing a zone mark at the top of the box (as he should be since he's short) leaving Jerome Boatenge to step up and challenge Vidic, or play the corner kick from a zonal perspective. 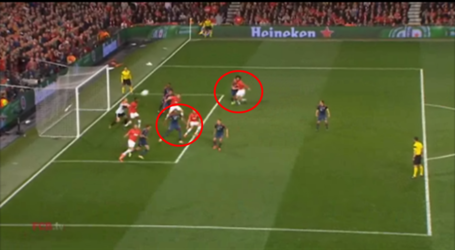 With the wicked delivery from Rooney, it looks like Bayern Munich are going to have their hands full from the outset. Boateng is still moving to respond to the ball while Marouane Fellaini has completely beaten Bastian Schweinsteiger and is now between him and the goal. Even if Vidic doesn't head this ball, there's reason to suspect Fellaini ends up with a wide open shot on Manuel Neuer's net. 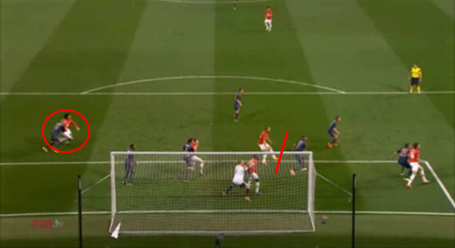 But it's from the alternate angle where you really get the best view of what happens with Jerome Boateng and his challenge on Vidic or actual lack thereof. Fellaini has already beaten Schweinsteiger leaving that back area behind Vidic ripe for the pouncing while Javi Martinez struggles to contain Phil Jones. In fact on this play, Thomas Müller is the only player man marking correctly.

As the ball comes in, Boateng, deployed in a zone mark, steps out to pick off the header before it can reach Vidic. However both players completely misjudge the flight of the ball. Boateng steps too far forward while Vidic checks his run, realizing just a half second before Boateng, that they've both misread its flight. 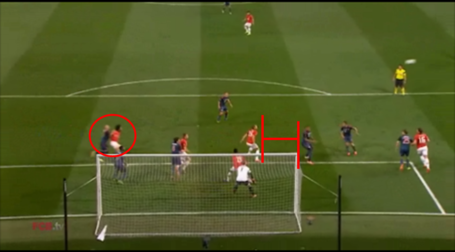 While Vidic drops back and hits a deft header into the side netting, Phil Jones has successfully broken free of Martinez and is dropping and dragging the Spanish international away from goal. In the reverse of Martinez losing his mark, Schweinsteiger has managed to take Fellaini out of the play, albeit with massive help from Phil Jones who cuts off the Belgian international's run. 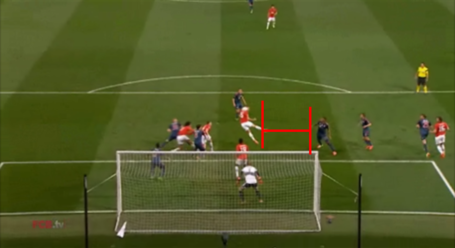 While Boateng is ultimately at fault for the goal having horribly misjudged the flight of the ball, his fellow teammates are all pulling off similarly poor hijinks that in all likelihood would have netted Manchester United the at-the-time go ahead goal anyways. Yet, despite all that went wrong, as Bayern Munich are aerially out-manned on this set piece using Jerome Boateng in this manner is actually one of the better options to corral Manchester United's aerially prowess. Given that both Schweinsteiger and Martinez will out for next Wendesday's return leg, Bayern Munich's ability to field enough players to aerially defend set pieces is also severely in doubt again. That should make every Bayern Munich fan very nervous.