Tactical Analysis: Pep Guardiola does the bizarre before turning to the familiar as Bayern Munich defeat Manchester United

The return leg of the UEFA Champions League quarterfinal was Bayern Munich in a tactical microcosm: flat yet unbeatable, static yet dynamic, ancient yet modern: and they defeated Manchester United 3-1.

Share All sharing options for: Tactical Analysis: Pep Guardiola does the bizarre before turning to the familiar as Bayern Munich defeat Manchester United

From an hour before the start of Wednesday's UEFA Champions League quarterfinal against Manchester United, Bayern Munich were clearly going to roll the dice with weird. Fielding a lineup composed almost entirely of attacking midfielders, it looked like Bayern Munich were setting up their lineup to go for the jugular without much discernable defensive ability in midfield. But what they ran out was an even weirder strategy.

Up 1-1 on aggregate with the vital away goal, Bayern Munich were in the driver's seat of this match from the first whistle and Manchester United were the chasers. However, similar to the first leg in Manchester, the David Moyes' side deployed deep and opted to hit Bayern Munich on the counterattack. But unlike the first leg, Moyes's side deployed in a 4-4-1-1 setup rather then the 4-5-1 of the first leg. It was that 4-4-1-1 setup that Pep Guardiola deployed his latest idea against (or rather his latest rehashing of a very old idea); the 3-2-2-3. 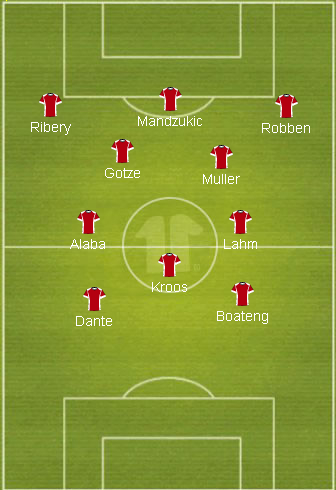 Rather then using David Alaba and Philipp Lahm as fullbacks, Pep Guardiola opted to use them directly in midfield ahead of Toni Kroos who he dropped directly between the centerbacks as he split them very wide. This had the main effect of isolating all of the Manchester United attacking midfielders from each other and curtailing the effectiveness of their press. After seeing the immediate and tangible effect Shinji Kagawa had last week when introduced and the nightmarish way he combined with Wayne Rooney and Danny Welback, the 3-2-2-3 was a brilliant way of containing those extremely dangerous interplays and forcing Kagawa and Valencia into attempting to solo it against Dante and Jerome Boateng. While Bayern Munich were able to contain both of them individually on most occasions, when United were able to create sustained attacks in the Bayern Munich half, the Bayern Munich defense looked haphazard and extremely suspect.

However, the unfortunate side effect of using the 3-2-2-3 was that Bayern Munich were incredibly narrow for the entire first half of the match. One week after narrowness really stifled the Bayern Munich attack in the away leg, the same issue plagued Pep Guardiola's side in this game. With Franck Ribery and Arjen Robben playing as their traditional inverted winger selves, Bayern Muniuch effectively narrowed themselves into oblivion as the Manchester United defense compacted and played coolly under pressure. Similar to a week ago, the inability to play with width, force one-on-one or use overlaps left Bayern Munich looking inept in the box in the first half.

Still losing on aggregate with only the final 45 minutes, Manchester United finally opened up and the game finally began flowing. In the second half, Guardiola opted to revert to the standard 4-1-4-1 that has defined so much of this season withdrawing Philipp Lahm and David Alaba from their spots in the midfield and dropping them into their standard four-man backline. While this gave Bayern Munich the defensive presence to respond to attacks down the flanks more effectively, it also left Toni Kroos on an island in the middle. While Lahm would frequently step into the center to aid in possession, in defense Kroos was a man unto himself and it allowed Manchester United the space to put together more coordinated attacks.

Suddenly staring down both barrels with 40 minutes left, Bayern Munich put their attack into full throttle on the restart with a stunning rapid break down the left hand side that saw Franck Ribery combine with Mario Mandzukic on a diving header to level the score within seconds of Manchester United scoring. And that's when the fireworks went off at the Allianz Arena. Franck RIbery and Arjen Robben both hugged the touchlines opening massive channels for Götze and Müller who rotated with Mandzukic as the whole team streamed into the penalty area continuously. With Rafinha coming on shortly thereafter for Mario Götze, Bayern Munich reverted to their standard 4-2-3-1 and pushed their attack into overdrive by overwhelming Wayne Rooney as Rafinha isolated Kagawa on the left. The Japanese international spent much of the rest of the match drifting in to try and find any room to operate. With Lahm turning in an exquisite performance in central midfield, Bayern Munich turned the screws on Manchester United. Franck Ribery and Arjen Robben attacked at pace, supported by in-cutting and overlapping fullbacks, and a seemingly-everywhere Mario Mandzukic, to beat the Manchester United press and defense time and again. The Thomas Müller goal to seal the tie was a combination of excellent penetration from both wings. The third from Arjen Robben was just icing on the cake.