The stage in the season that Bayern Munich is entering into is one that the spectators of Germany's greatest team has waited for since the added prospects in the Summer transfer window. The fruit is plentiful, adding several tasty flavors to the world's greatest smoothie. Now manager Pep Guardiola has all the ingredients he ordered, and the combinations he has to work with are plentiful and ripe.

"The Full Complement" was more fable than fact for most of the 2013/14 treble defense, but for the first time the full cast of characters looks as imminent as ever. This analysis of the FC Bayern squad is the final installment of a three part series, taking a peak into what team selections could look like for the rest of the season.

For a defense that allowed just 18 league goals and froze Juventus and Barcelona en route to the first German triple, a major doubt surrounded the gatekeepers when Pep Guardiola moved a pivot piece farther up the pitch.

What resulted is a more immersed, engaged back that are knights with a sword rather than just a shield. Dante and Jérôme Boateng are both averaging about eight more passes a game, including two long ones, in league play. David Alaba and Rafinha have combined for 11 assists, 21 percent of the goal assists that FC Bayern. 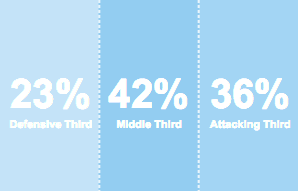 The four, who have played more matches together than any other assortment, have looked disorganized at times. That has lead to some unflattering scoring chances, but their ability to keep possession has outweighed any apparent defensive shortcomings, pushing play more to the midfield. Besides, a club that only surrenders a 29 percent average of possession and shoots the ball 19 times per match is not doing much defending.

For a large portion of the season, the defensive selection was largely predictable. Alaba, Dante, Boateng and Rafinha played 16 of Bayern's first 31 matches together, with Daniel van Buyten, Diego Contento and Philipp Lahm occasionally sprinkled in. The last four matches has brought a different wave of change.

Lahm, who migrated from his longtime home at fullback to discovered a different life in midfield, has returned home as an option. The homecoming was in reaction to the returns of Bastian Schweinsteiger and Javier Martínez, although the celebration only lasted the first half of the Champions League. The truth is hard to believe, but Lahm is now the defensive option at fullback, and Rafinha has morphed into a co-primary option.

The 29-year-old Brazilian's revival is well documented, culminating in his first call-up to the Seleçao in five years. While not the defensive wizard that Lahm is, the drop-off is not what it used to be. Rafinha has the lowest foul rate of his career (0.8 per game) barring last season, winning 56.5 percent of his ground duels at the same time. His attacking effort is comparable as well, on pace to register offensive numbers just a tick below Lahm's career season from last year.

Rafinha's fate has been tied to Lahm ever since he transferred from Genoa in 2011, first playing opposite his captain before Alaba's exuberance pushed him out of a job. He thus became Lahm's insignificant tag-team mate, not seeing the pitch until Lahm tagged him in. The pitch time Rafinha sees now depends on what Lahm's midfield compatriots can do, either usurping the midfield back or becoming integrated fully with the 30-year-old in the center of the park.

The fascinating narrative in the center of defense is how Guardiola has treated his options. The gaffer's three man rotation supported Bayern through the Hinrunde, but Daniel van Buyten's back injury put the workload solely on Dante and Boateng's shoulders. The squad depth Bayern signed in the summer, Jan Kirchhoff, was loaned to Schalke the minute the January transfer window, although his injury would have taken his availability regardless.

Enter Bayern's new center back, an addition that came at no cost, as Guardiola has progressively committed to Martínez as a center back. It is a position that the 25-year-old is now playing for his country as well with Vicente del Bosque plugging him in the back in the stead of Barcelona's Gerard Pique.

Martínez's midfield future has a dark cloud hanging over it with stellar passing options firmly intrenched. He is a great plug for the defenders behind him, not letting a lot of attack leak through and rotting the back. Martínez is not a play conductor, though, although his passing percentages are still above average for his position. His destiny might have lead him eventually to defense regardless, for his passing prowess is not as good compared to the options ahead of him.

What Martínez provides as a center back now is another stellar combination of tackling fortitude and wise distribution. The lack of extended experience in the back is the only wart on his portfolio. If he can have the habitual instincts required for the center back profession, he will not only be a valuable depth piece, but also make a search for another center back superfluous and unnecessary.

The ascension of Martínez could lead to a consequential devaluation of van Buyten. With the inevitable decline of some of his physical attributes, the Belgian could be relegated to the occasional spot during the rest of the season, a similar role to what Contento plays behind Alaba. What will really help his case is an earlier clinch of the Bundesliga, allowing him to fill in as a squad player to spell his younger teammates.

The last variable into the defense equation is Holger Badstuber, who is progressively regaining his fitness after multiple knee surgeries. Just as many question marks circle around role as much as his return, especially whether the Badstuber will have either one. Evaluating his place in the team would be similar to predicting what will happen when the sun burns out.

Bayern have conceeded 17 goals in all major competitions, the least among all the remaining UEFA Champions League clubs. With all tinkering Guardiola will do to keep his entire squad involved, the defense will likely remain the section with the least amount of finger prints on it.