Tactical Analysis: Bayern Munich dominates, then once again has trouble with the Arsenal high press

Tactical Analysis of Bayern Munich's 1-1 draw (3-1 aggregate win) with Arsenal that sent them through to the UEFA Champions League quarterfinals.

Share All sharing options for: Tactical Analysis: Bayern Munich dominates, then once again has trouble with the Arsenal high press 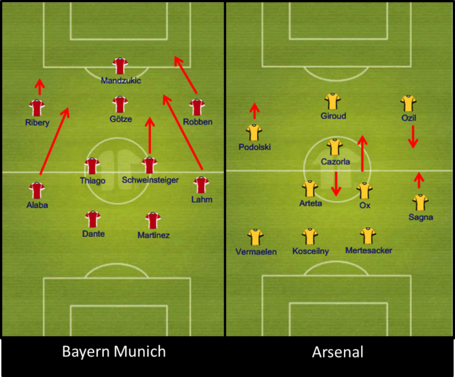 It was a jekyll-and-hyde performance from Bayern Munich in yesterday's UEFA Champions League Round of 16 against Arsenal FC. Bayern Munich rolled out in their 4-2-3-1 while Arsenal adopted their more aggressive defensive 4-3-3 formation. From the outset Bayern Munich controlled possession to a ridiculous degree as they looked to shut down and prevent the Arsenal from having any influence on the match. However, Bayern Munich were unable to break down a stalwart Arsenal defense that played compact, yet flowing, defense for nearly 90 minutes.

Guardiola opted to use his fullbacks along the inside channels, keepng both Ribery and Robben wide, rather then using them as the absolutely stellar inverted wingers they are. The point here was to force both Sagna and Vermaelen, the Arsenal fullbacks, to stay with the infinitely more dangerous attacking options allowing both Lahm and Alaba to aid Mario Götze in the center of the pitch to overload both Koscielny and Mertesacker. Ultimately that was ineffective as Sagan and Vermaelen time and again, opted to drop off Ribery and Robben allowing them to be picked up and pressed by a central midfielders, or left completely unmarked. It was during this phase that Franck Ribery had the most influence on the game as Mesut Ozil proved once again how extremely limited his prodigious abilities are in defense.

Furthermore, when Bayern Munich were forced to play deep and out of the back, Arsenal opted to bring Alex Oxlade-Chamberlain(Ox) forward alongside Santi Cazorla where the two alternated secondary pressing on both Bastian Schweinstegier and Thiago Alcantara. The presence of Mikel Arteta in the center was enough to stifle the freedom on the ball of Mario Götze(but not spatial movement) who had an extremely quiet evening. However, the minute Bayern showed sustained presence in the Arsenal half, both Cazorla and Ox dropped back and formed a compact three man holding midfield in front of the centerbacks while Podolski and Ozil dropped deeper to turn it into a bank of five in front of the Arsenal backline.

It was Ozil that caused the most problems for Arsenal in the first half as his inability to press or defend gave Bayern Munich copious amounts of space and time on the left and an area to relieve pressure from the otherwise high Arsenal press. Whether that was down to a hamstring injury sustained during the match or just plain bad defending is hard to determine.

Adding Tomas Rosicky to the mix and Guardiola's big mistake

At the start of the second half Arsene Wenger withdrew Mesut Ozil, adding instead the always dangerous Tomas Rosciky to the fray on the right hand side. And for the first time in the match Arsenal were able to muster a sustained high press that gave Bayern Munich something to worry about. It also proved Arsenal's ultimate undoing as one high press turned into a Bayern Munich attack. The defensively out of position central midfield allowed a free run from Bastian Schweinsteiger that saw the vice-captain turn in the first goal of the match. However, it was immediately followed by the emphatic response delivered by Lukas Podolski.

At 1-1 on the evening, and 3-1 on aggregate, it's here that Guardiola made the key mistake of the evening in withdrawing Mario Götze in lieu of Toni Kroos. So far, the ability of the 20-year-old had kept Mikel Arteta occupied as he bounced from side to side, combining with the streaking fullbacks and forcing the Arsenal fullbacks to stay tucked in and narrow. With his withdrawal the fullbacks were free to mark Robben and Ribery more closely, allowing the wide midfielders the ability to more effectively press the Bayern Munich fullbacks. While Arteta marked the centrally stationary Thiago, Ox and Cazorla attacked Schweinsteiger and Kroos head on with full force. Adding in the newly resurgent Lukas Podolski and Bayern Munich were suddenly on the back foot with few outlets besides Manuel Neuer to relieve the press.

The composure of the Bayern Munich backline was tested repeatedly and lead to quite a few Arsenal chances until Thiago dropped deeper into holding midfield to aid Schweinsteiger and Kroos. While that did enough to right the ship, it was by no means an effective solution as Arsenal continued to generate not only counterattacks, but sustained possession in the Bayern Munich half. That sustained possession was mostly of the non-dangerous nature while the counterattacks were of the more dangerous variety.

It wasn't until Arsene Wenger was forced to substitute Serge Gnabry for the absolutely gassed Mikel Arteta, that Bayern Munich were able to assert some semblance of meaningful control on the match again, but the everpresent danger from Cazorla and Oxlade-Chamberlain continued to plague them until Wenger withdraw the standout English international 6 minutes from time. From there on out, it was Bayern Munich time again as they pushed Arsenal again and again, earning a penalty in stoppage time, which of course they missed because what's another frustration into the second half?