Bayern Munich won the first leg of the UEFA Champions League Round of 16. But it was a terse tactical affair before a 37th minute red card to Arsenal goalkeeper Wojciech Szczesny changed everything.

Bayern Munich won the first leg of UEFA Champions League ROund of 16 tie with a 2-0 win over Arsenal FC. While the scoreline belies that Bayern Munich were the superior club on the evening, it was far from comfortable as Arsenal controlled the tempo and pace for much of the first half before a 37th minute red card to Wojciech Szczesny changed the match dynamics completely.

Pep Guardiola attacked this match in a highly unconventional way to start off while Arsene Wenger really too the most simplistic approach in trying to control Bayern Munich. Coming in you knew that Bayern Munich were going to have the majority of possession and the real question was always going to be to what extent Arsenal could limit their dominance while hitting them on the counter. The first 30 minutes equaled out in a 60/40 ratio to Bayern and was indicative of the strength that Arsenal had in attacking Bayern Munich. 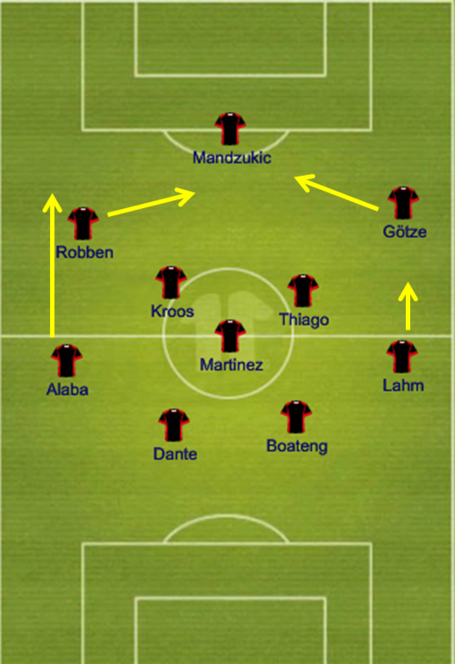 Bayern Munich started off in a modified form of a standard 4-3-3(2 holders, 1 CAM) which is not their normal setup. They utilized Thiago, Kroos, and Martinez, with the intent for Thiago to be forward most commonly of the three. However, where it was different was it the main central attacking influence of using Thiago off the main striker was hampered by the Arsenal holding midfield duo of Jack Wilshere and Matthieu Flamini who were stunningly coordinated and defensively sound all evening. This limited Thiago's ability to get forward and forced Bayern Munich into a three man holding midfield. The ultimate effect was that when Arjen Robben, deployed on the left side of attack where he is poorest cut inside it exposed tons of space on the left for David Alaba to overlap with. The same thing occurred on the opposite side with the partnership of Mario Götze and Philipp Lahm. The only issue being without that extra support of Thiago in the middle, Bayern Munich frequently lost possession in attack with no support for the highly advanced fullbacks. This gave Santi Cazorla and Alex Oxlade-Chamberlain way too much room for attacks down the wings which dragged the Bayern Munich defense out of position and left Javi Martinez exposed on what was already shaping up to be a very poor first half from the Spaniard. 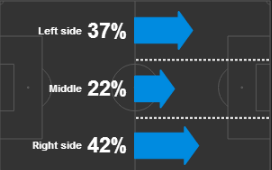 The first few minutes were the most tense as both Robben and Götze bombed into the center giving Arsenal free reign down both sides simultaneously. After several such attacks, Guardiola reeled in the attacking midfielder on the right, keeping him closer to the touchline and forcing the Arsenal counterattacks down the left side. The idea here was that David Alaba's pace would be enough to harass and harry the Arsenal attack giving Bayern enough time to put together some semblance of defense. It was a plan that worked only in the sense that Manuel Neuer was there to clean up the messes that continually ensued and ended up pushing down both flanks. It was a definitely a rough first half for David Alaba and Philipp Lahm.

It was shaping up to be a truly entertaining and brilliant tactical showpiece of a match.Then the Wojciech Szczesny red card changed everything

Changing the Plan of Attack 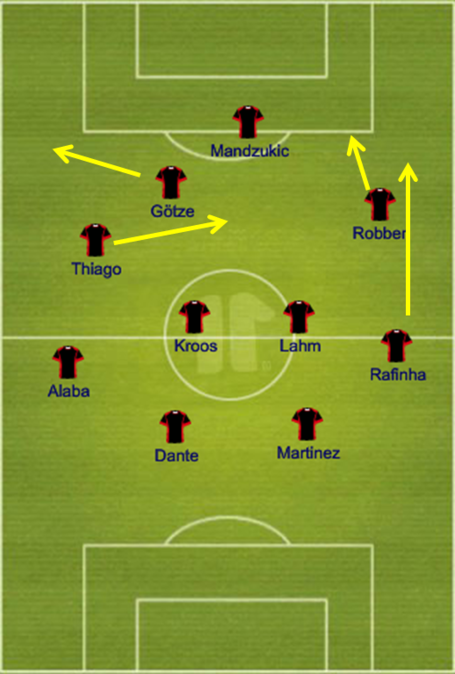 With Arsenal dropping into a 4-4-1 defensive shell following the red card the Wojciech Szczesny, Bayern Munich took full advantage of the man advantage to deploy an incredible display of overlapping and attack. Guardiola shifted Thiago Alcantara out to the left and brought Mario Götze more centrally. The two of them interchanged mercilessly giving Oxlade-Chamberlain fits and causing his eventual substitution. Guardiola shifted Robben out right and kept him wide as an inverted winger with high and overlapping support from Rafinha and Phillip Lahm that ensured Mesut Oezil and Nacho Monreal were completely pinned back. It was also a very specific targeting of the weakest point in the entirety of Arsenal's defense. We should really be standing and applauding Mesut Oezil for not embarrassing Arsenal with his performance in defense. That's never been a skill he's shown in spades. It took one set of overlaps for Bayern Munich to get Toni Kroos enough space for him to hit an absolutely stupendous strike into the top corner from outside the area giving them the 1-0 lead.

The addition of Müller and Pizarro gave Bayern Munich another interchanging partnership for Arsenal to keep track of which ultimately was their final undoing. As Flamini lost Müller at the far post, Mertesacker was dragged away by a brilliant run from Pizarro to give the young German enough time to bury his 18th goal of the season. Down 2-0 Arsenal packed it in and Mario Götze got in on the interchange action. Only the post and some timely last minute blocks saved Arsenal from conceding another goal or two in stoppage time.