Bayern Munich's new kit has been leaked online - and it's a solid one.

Share All sharing options for: Bayern Munich's 2015/2016 kit has been leaked and it is very red

It's December and we're just 6 months away from the official unveiling of the new 2015/2016 Bayern Munich. Naturally that means it's time for kit leaks! As usual the always excellent Footy Headlines is on top of it and they're bringing us the reportedly new Bayern Munich home kit for next season. Given Footy Headlines track record with kits, and their nearly 100% record over the past few years with Bayern Munich, it's a kit mockup to pay attention to.

Take it away Footy Headlines! 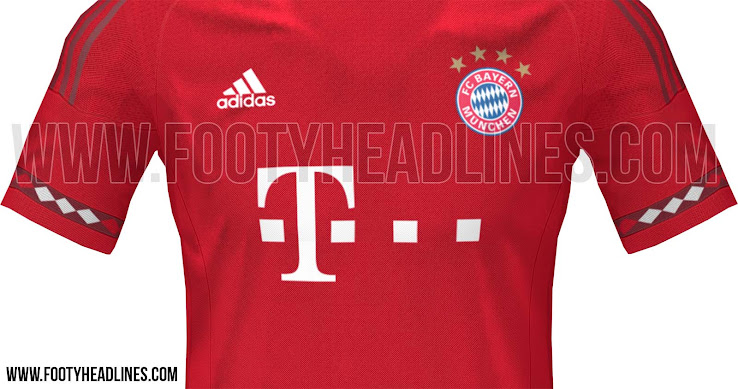 First things first - pure red is back. Bayern Munich always look their best when playing at home in deep red and this kit is a nice return after the blue and red striped kit of this year. While the current home kit has drawn the ire of many fans for being too "Barcelona-y", next year's kit will feature a return to the traditional solid -- just completely ignore that the blue and red stripes are also tradition in this narrative.

However, unlike in year's past with gold or white accents, this new kit will use burgundy accents for the striping with white accent diamonds on the sleeves. The red-on-red schema is an extremely interesting choice and it'll be really hard to gauge with any certainty until it comes out as a final product if it is the final design choice. Like the gold of two years past, the choice of a more subdued piping makes white the focal point of the jersey. Given that the biggest white splash on the jersey is the sponsor logo, it'll certainly be a kit with a billboard feel.

All in all, it's a solidly excellent kit worthy of Bayern Munich. Here's hoping this ends up being the real thing.