Bayern Munich vs. CSKA Moscow: Community Ratings and Man of the Match

The Bavarian Football Works community gave their Man of the Match award to Manuel Neuer. Who else came out smelling like roses from Tuesday's 1-0 win over CSKA Moscow?

Share All sharing options for: Bayern Munich vs. CSKA Moscow: Community Ratings and Man of the Match

In Matchday 2 of the UEFA Champions League, Bayern Munich came up against the bunker-counter strategy. So naturally the man of the match was the goal scorer? Wrong.

The community chose instead to hand the Man of the Match honor to Manuel Neuer for his heroics at stopping the CSKA Moscow counterattack. The big tall German wall of awesomity registered 3 saves on the evening but it was willingness to come of his line and clean up the frequent mistakes of Mehdi Benatia and Dante that were his hallmark of the match. 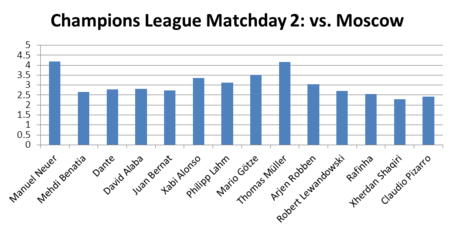 Rounding out the listing of other top performer was Thomas Müller whose claim to getting voted better then his compatriots was a well taken penalty kick and some good in-box movement. Overall it was not a kind voting from the users, despite the fact that Bayern Munich walked out of Russia with all three points.

The majority of the Bayern Munich performances were graded out as below average by the readership. The normally impressive David Alaba was criticized heavily with a 2.95 aggregate rating while Robert Lewandowski was a source of some ire. He received a rating of 2.86 despite the fact that he spent the entire match with two three-toed sloths attached to his back. Mehdi Benatia graded out with a well deserved below average rating for his poor play over the course of the match.

The dislike for Xherdan Shaqiri continues as his performance off the bench was again rated very close to 2. Coupled with his ratings in recent matches as well, independent of other context, it's becoming clear that Bayern Munich fans are starting to run out of patience with the highly touted Swiss international.

You rated Claudio Pizarro as a 2.58. Shame on all of you. Have you no respect for hair quality?

Writer's Note: I removed about 15% of all the ratings as quite a few voters gave every single Bayern Munich player a 1 except Thomas Müller and Manuel Neuer. It may have been an extremely dull match, but this behavior is not in the spirit of honest assessment. If you think a player deserved a 1, that's completely fine, but grading out every member of a team as abject is not what this exercise is about. This is not intended to be catharsis. I will delete the votes when I see this behavior. Fair warning.