Do Bayern Munich have a problem with parked buses?

CSKA Moscow came in with one game plan yesterday, and Bayern Munich didn't have the necessary tools to address it.

Share All sharing options for: Do Bayern Munich have a problem with parked buses?

In case you had better things to do yesterday, you missed Bayern Munich facing off against CSKA Moscow in the Champions League. Calling the game mind-numbingly dull is charitable. It was atrocious to watch.

Moscow came out of the gate with one single objective: park, park, and more park the bus. It's a term I really hate, because 99% of the time it is misused. There is a fundamental difference between staunch defense, teams that employ catenaccio, and then full on parking the bus (or bunkering). With overwhelming emphasis on possession being in vogue as the only true "beautiful football", somehow all the defensive types of football became the red-headed stepchild of the game and "parking the bus" because the post slogan for all of it. 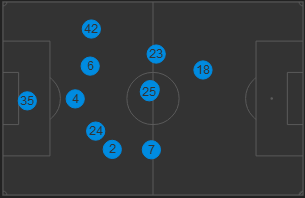 However, yesterday parking the bus was entirely apropos description. It, and nicking a goal on the counter, was Moscow's only plan against Bayern Munich. Just take a gander at their average position map that shows a 5-man backline playing extremely deep in their own half. That's their average position!

However, Bayern Munich with all the skill in the world, only managed a single goal and that one came off a penalty. The question becomes, "is this an issue?" Teams are naturally going to struggle against the bunker. It's a highly effective defensive strategy that raises a teams odds of getting a win or draw against much better opposition. So, how did Bayern Munich stack up on the evening?

21 shots? For a team who had nearly 80% possession and 90% passing success, they better have generated at least 21 shots. We're still looking.

8 shots on target? A little over 33% of the total shots taken were on frame. That's about normal for any match. We're still looking.

Okay, so the stats on shots look normal. There's nothing glaring. But what about shot location (via Squawka)? 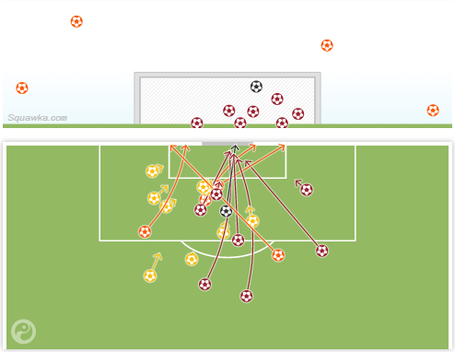 Oh, there's the issue. All shots on target to the right of the goal. Most shots were at an angle slicing towards the right post. Coupled with the overwhelming majority of the shots and buildup play coming from the right side of attack, it's easy to see that the Bayern Munich was attack was predictable. That's not surprising or unexpected given the way Guardiola has lined up his team in recent games. Rather then using a true wide player on the left, he's asked Juan Bernat or David Alaba to play double duty and overloaded the right hand side of the field with Thomas Müller and Arjen Robben. It's a strategy that worked extremely well against Paderborn and Köln but a strategy that worked against themselves in this match.

With a 5-man backline and Bayern Munich attacking almost exclusively down the right, this allowed the Moscow defense to cheat, shifting the leftback and left centerback over. This neuters the entire advantage inherent in Bayern Munich's choice, while Moscow still retains a duo of centerbacks in the middle that turns Robert Lewandowski into an inert piece of meat . To his credit Guardiola opted to shift it up swinging Robben over to the left occasionally to combine with Bernat. However, with just the 2v1 advantage the attack did little more the fizzle out given that going head-to-head aerially with three tall centerbacks is a terrible idea unless you have a player like Mario Mandzukic. Without the aerial avenue, it comes back to the ground game and with the bunker it's all about putting bodies in the way of the ball.

However, taking a step back from the minutia of this game, it's clear that Bayern Munich are going to have a problem with this until Franck Ribery returns. Without Ribery, the Bayern Munich attack is unbalanced spatially. Against a bunker, the team needs to open up space between the centerback and the fullbacks. This allows midfield runners and strikers to pull the centerbacks out of position when a fullback overlap creates the man-advantage on the wing. The only way to do this is playing wide on both sides at once. Xherdan Shaqiri and Mario Götze are much better playmakers and excel in linking up play through the middle of attacking midfield. Without Ribery, there's no option other then Juan Bernat on the left, and there's a reason he's a leftback and not a left sided attacking midfielder.

That could mean more games like one until this team has their dynamic talisman on the left fully fit. I, for one, am not looking forward to that prospect.