In the waning seconds of Wednesday's match at the Mercedes-Benz Arena it looked like VfB Stuttgart was going to hang on to collect a point against the Bayern Munich juggernaut. But less then 30 seconds before Manuel Grafe was set to blow his whistle the last Bayern Munich attack was met with one of the most incredible goals of the season as midfielder Thiago Alcantara pulled off a flying bicycle kick to slam the ball home inside Sven Ulreich's far post. But it's a goal that never would have been without some very costly individual errors from the Stuttgart defense in the seconds leading up to Bayern Munich's late winner

The play sequence begins on the left side of the field with Thiago in possession surrounded by 3 other Bayern attackers in an attempted zonal overload. These type of attacks have been Bayern Munich’s specialty this season. Stuttgart recognizes the danger and compacts to that side of the field stifling the attack going forward. Thiago, under pressure, passes right to Pizarro while continuing his run, hoping for a Claudio Pizarro special (backheel) or a sequence with Pizzaro and Müller to put him in on the near post to feed Mandzukic at the far post. 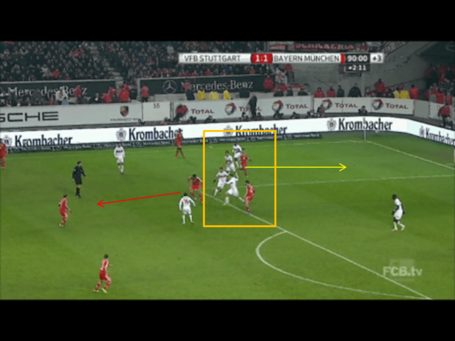 Pizarro immediately finds himself under pressure. The Peruvian has no choice but to pass backwards into the waiting feet of Philip Lahm. However, that back pass starts a sequence of events leading to Stuttgart conceding the game winner to Bayern Munich as Thiago Alcantara and Thomas Müller end up goal side of the entire Stuttgart defense on the left side of the field. 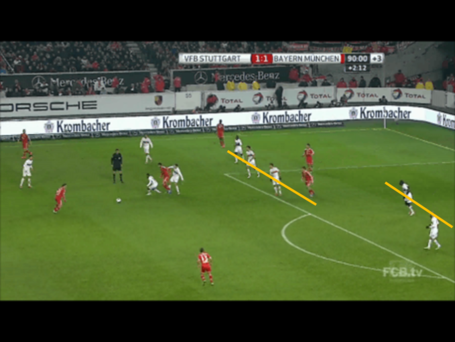 As the ball comes into the feet of Philip Lahm most of the Stuttgart defense has stepped up; most being the operative word. Antonio Rüdiger does not step up leaving both Thiago and Thomas Müller completely unmarked and completely onside. Leftback Konstantin Rausch sees the issue leaving him pinned as well to his mark in Mario Mandzukic (off-screen). This is absolutely sloppy defending from Rüdiger. The second lesson of defensive theory right after zonal marking is that when the ball is traveling backwards defenses push up. This does two things: 1) it compacts distance between your defensive lines as the midfield presses the secondary attackers, 2) it puts attackers offside forcing the opposition midfield into backpasses with the absence of viable forward targets. When some players step up and others don’t the entire defensive line breaks down and suddenly, offside players are viable targets with no marks and excessive space in which to operate. 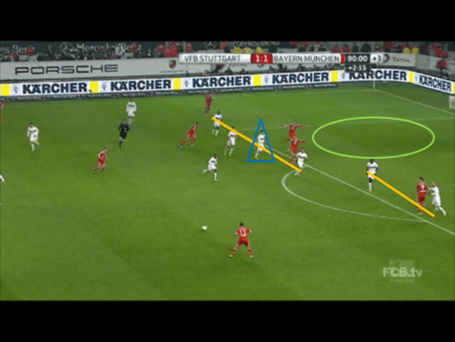 As Phillip Lahm dishes the ball wide right to Rafinha, Rüdiger finally responds attempting to reform the defensive line. However, it’s too little too late. Müller and Thiago are already calling for the ball, seeing the absolute gift of space Rüdiger has given them; and Rafinha hasn’t even received the ball yet. Recognizing the danger the defense is in Daniel Schwaab, the other Stuttgart CB who pushed up pressing Pizarro, begins rushing back to cover the huge hole on the far post. 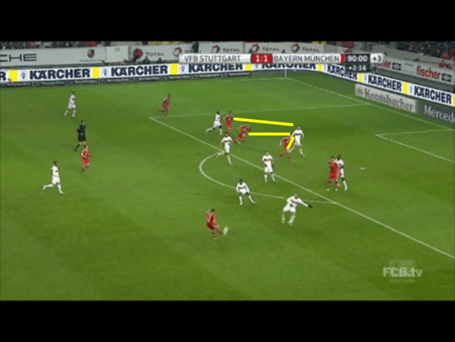 It’s the final part of the play where Bayern Munich’s quality really asserts itself. With Daniel Schwaab alone on the far post and tracking the run of two Bayern Munich attackers, it’s really unfair to pair him up against Thomas Müller, Thiago Alcantara, along with a late streaking Claudio Pizarro. That’s two absolutely prolific headers of the ball crashing the box and one is going to be unmarked. Rüdiger’s failure to step ultimately culminates here as Rafinha has a virtually free cross due to the distance leftback Konstantin Rausch has to goes to close Rafinah down. His inability to step up earlier in the play has now given Rafinha all the time and room in the world to put together a fantastic cross towards the far post. Schwaab, seing the cross being aimed up, tracks the run of the more aerially dangerous Thomas Müller. It’s a smart choice, but a choice negated by the beauty of what happens next.