As Philipp Lahm receives his 100th cap for Germany, Bild published a letter of congratulations from Bastian Schweinsteiger.

On the eve of Philipp Lahm's 100th cap with Germany, Bastian Schweinsteiger wrote an open letter that was published in Bild. Fittingly, today's World Cup qualifier against Austria is in Lahm's hometown of Munich. 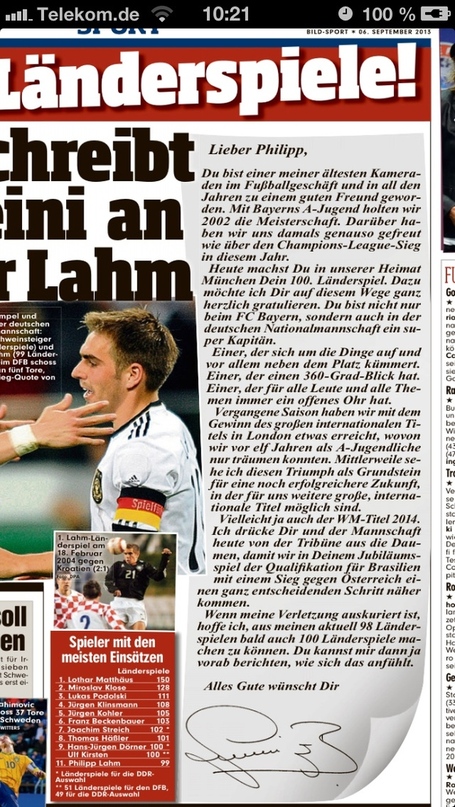 You are one of my oldest football buddies, and we've been good friends for many years. In the Bayern A youth, we won the championship in 2002. On top of that, we won the CL this year.

Today, in your home city of Munich, you will play your 100th match for Germany. For this, I want to congratulate you. Not only are you a great captain for Bayern but also for Germany.

You're aware of everything that's going on when on the pitch. Someone who has 360 degree awareness. Someone who can listen to everyone and about everything.

Maybe even winning the World Cup next year. I will fully support you and the team from the stands and I hope for a win in your anniversary match against Austria.

When I've recovered from my injury I too hope to increase my NT tally from 98 to 100 like yourself. You'll then be able to tell me what this is like

I wish you all the best,

On behalf of everyone at Bavarian Football Works, we'd like to take this opportunity to congratulate Lahm on becoming the 8th German to join this elite club.