Bayern Munich defeated Hannover 96 in the second round the 2013/2014 DFB Pokal on Wednesday. The opening goal from Thomas Müller's brace is the focus of this goal breakdown.

Following a foul in the center of the park on Diego Contento, Hannover is given time to reset their defense in preparation for the Bayern onslaught. 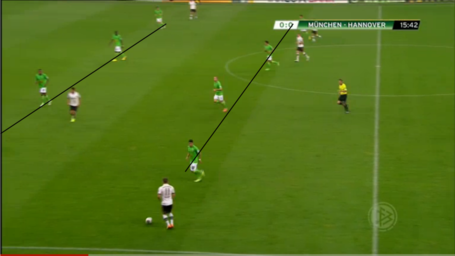 Hannover sets up in a standard two banks of four. Following the restart in play the ball is played forward to Xherdan Shaqiri. Unfortunately, the Swiss international has no real option as the Bayern offense is mostly on the opposite half of the field. Pizarro moves left drawing compacting the defense left. Playing the ball forward to Pizarro would just end with the ball being played back to Contento and halting the attack. With no  particularly viable option moving forward, Shaqiri elects to play the ball back to Dante. 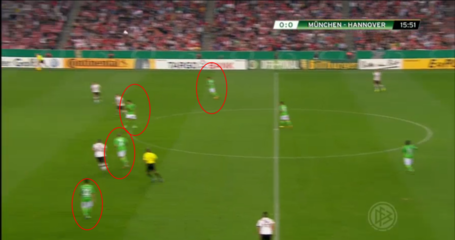 In response, the Hannover midfield steps up removing the direct midfield options for Dante. However, with the shifted back line defense and more space between the lines, Muller makes a run across the defensive line to which Dante delivers a fantastic ball directly over the top for him.

The over the top ball leaves the Hannover defense in complete disarray. Muller lays it off directly for Pizarro who hits it directly into the Hannover centerbacks. 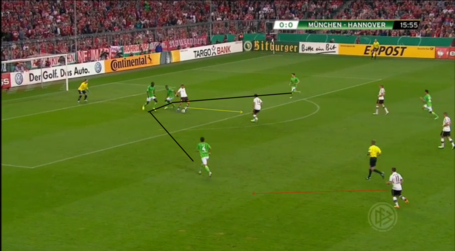 Following the Pizarro blocked shot, It's now a 5-on-5 with a completely disorganized Hannover defense. Both fullbacks have a long way to run to reset the defense. In this situation with the ball moving out wide, the proper strategy is for Hannover to reform their lines and set up to defend the cross. To do this Hannover needs to cut down the crosser which unfortunately becomes rather problematic. 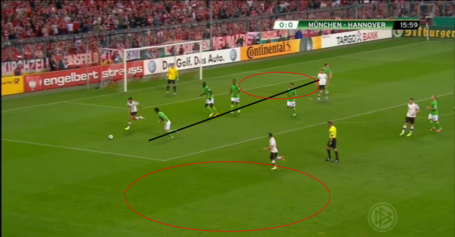 The issue is that Hannover's wide midfielders decide that playing defense is for suckers and lesser souls, completely abandoning their team. In addition, Leon Andreasen decides that a leisurely stroll through the park is in order leaving Lars Stindl to attempt to do his work and that of two other players.The lack of support from most of the midfield leaves the Bayern with a 2-on-1 on the far side and an outrageously advantageous position at the top of the box.

With Sakai challenging Pizarro, Hannover CB Salif Sane is forced into single cover, restricting his ability to compact the center of the box with fellow centerback Marcelo Filho and cut out the aerial threat of a cross. This ends up leaving  ilho high and dry in the center.Thomas Muller recognizing this evolution of the play lays off near the far post forcing an incredibly advantageous matchup with Hannover LB Sebastien Pocognoli. 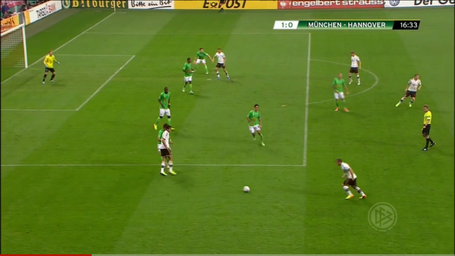 The lack of additional support gives Shaqiri an uncontested cross. Muller has nearly free reign to put the ball In the net when matched up against the LB, and being Thomas Muller he decides to chest/arm/flounder the ball into the side netting to put Bayern up 1-0 over Hannover.

This goal from Bayern Munich was equal parts brilliant individual skill in recognizing and acting on the little space that does open up to begin the attack and the equivalent amount of laziness from the Hannover midfield.