We preview the first round of the 2013/2014 DFB Pokal as Bayern Munich travels to take on fourth division side BSV Schwarz-Weiß Rehden.

Welcome to the start (or the second match, depending on your perspective) of the 2013/2014 campaign. The DFB Pokal kicked off this past Friday, and we have to wait all weekend for Monday when Bayern Munich travel north to Rehden to take on fourth division side BSV Schwarz-Weiss Rehden. As the current owners of the DFB Pokal (can I get a treble woot!?), this competition like all others we participate in this season, starts with a target painted on our backs. Fortunately, it begins with us facing a fourth division side, and one that most likely barely qualifies as a test for the Bayern reserve squad, let alone the first team.

BSV Schwarz-Weiß Rehden come off a 2012/2013 season in which they placed 9th in the 16 team Regionalliga Nord. They qualified to this season’s DFB Pokal only by virtue of being the runners up in the Lower Saxony Cup in the 2012/2013 season. Prior to the 2001 season, the Rehden side existed purely as an amateur team. In 2001, they earned promotion to the Oberliga Niedersachsen-West, one of the 14 fifth division leagues of German football. After 10 years in that division, they won promotion to the Regionalliga Nord following the 2011/2012 season.

As their season has yet to begin, not much information is available on the current tactical makeup of this squad. However, last season this young team played in a 4-2-3-1 setup emphasizing the strike power of 22-year old Alexander Neumann, who put away 14 goals in 31 appearances, with the majority of their assists coming from the wings.

Given the nature of this opponent, this should be a relatively easy match for the Bayern Munich reserve squad, let alone the first team. That being said, Pep Guardiola should see this match as an opportunity to more fully integrate this side with each other and to works out many of the kinks that this team has in implementing his vision of the 4-1-4-1. We saw Pep Guardiola run out the 4-1-4-1 in the DFL SuperCup loss to Borussia Dortmund that utilized Thiago Alcantara as the lone pivot player along with Toni Kroos and Thomas Müller as the central midfielders. I would expect them to utilize this midfield trio again or perhaps with Xherdan Shaqiri in place of Müller. In all honesty, this midfield power is probably overkill for defeating the Rehden side, but this should be viewed as an opportunity to give this midfield partnership a chance to improved their chemistry and positioning. I’d expect to see Kirchoff run out for his first spell in central defense alongside either Dante or Boateng just to develop either of those partnerships. As for the striker, I’d expect a reserve side player to fill this need, and my money is on Julian Green given his impressive pre-season to date. That leaves the wings, and I’d expect Ribery on the left and a reserve sider, most likely Weihrauch or Weiser in that position on the right.

Given Pep’s previous practice of putting Phillip Lahm into the central midfield, there’s a possibility we might also see that again in this match but I think Lahm has learned what he needed from those experiences. I’d expect him to be on the bench, leaving either Rankovic or Rafinha to fill in at RB. This is my expectation for Monday’s starting eleven: 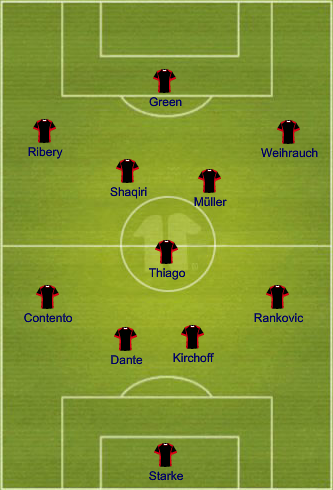 Lineup generated using this11.com
The match begins tomorrow at 8:30 PM CET at the 4500 seat Sportplatz Waldsportstätten. It will be available on ESPN3.com in the USA. Be sure to join us.