Understanding the 4-1-4-1: Schweinsteiger, Guardiola’s vision of the single pivot, and the transition into attack

Let's examine the 4-1-4-1, specifically focusing on how Guardiola uses Bastian Schweinsteiger to dictate and control play from build up into attack and why Javi Martinez is not the right choice for the single pivot.

Share All sharing options for: Understanding the 4-1-4-1: Schweinsteiger, Guardiola’s vision of the single pivot, and the transition into attack

The Transition into Possession 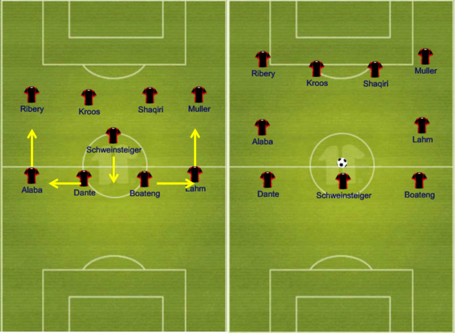 When Guardiola’s Bayern has earned possession back from the opposition, they begin playing out of the back in a coordinated systemic manner.  The first step is the push of the fullbacks and the drop of Schweinsteiger in between the centerbacks. Basically what this does is completely open the middle of the park. Any player is now capable of dropping into this space and having the ball worked to them. The primary conduit is dropping one of the center midfielders, most often Toni Kroos into the middle to distribute in the middle of the field while Schweinsteiger distributes from the back. Against Frankfurt, both Shaqiri/Kroos and Kroos/Thiago performed in this manner. 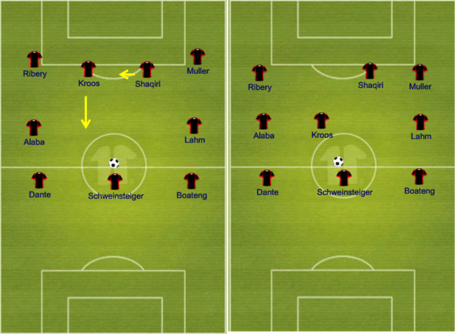 In the transition forward, the ball is played either long to Mandzukic (not pictured) or an attacking midfielder, or the play is built up from the back through (in this case) Kroos or one of the fullbacks. 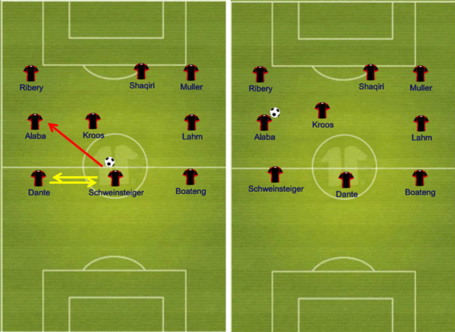 When transitioning forward to the left back, Schweinsteiger and Dante perform a switch keeping the distributive playmaker in back of the ball. The point to this being that should play be stifled, the play back is in to a playmaker for direct dissemination either wide right or back forward. 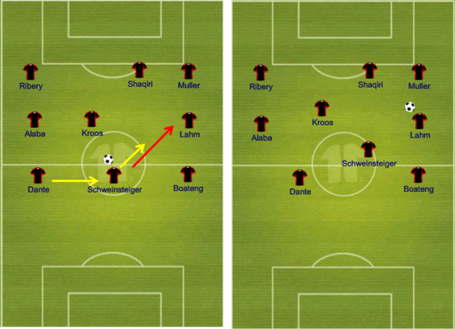 In contrast is the move right to Phillip Lahm where Boateng and Schweinsteiger don't switch and Schweinsteiger actually steps forward into the midfield to create an aysmmetic midfield triangle. I expect either of these patterns of forward movement to be used depending on the defensive setup of the opposition or the creative capacity of the fullback in question. 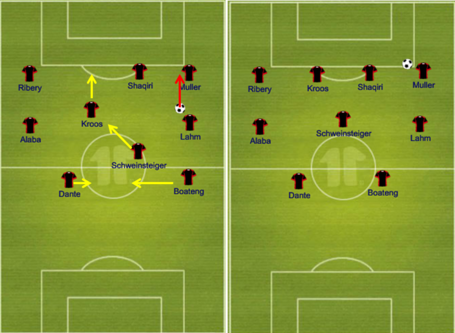 The transition into attack is accompanied by the reformation of the centerback pairing and with the pivot playmaker stepping into the hole.

The main aspect of this form of tactical build from the back is to retain creative and spatial control. Not relying on the centerbacks to transition play from deep, and using the more dynamic pivot player ensures that an opponent's press cannot be deep or sustained. The constantly shifting and moving back line is nearly impossible for the opposition forward to press effectively and should they commit to a press, a simple pass forward on either side hits a wide player, or in the center, finds a player running into unmarked space. From that point, the multiplicity of potential targets stemming from using two central midfielders creates space and options simply because the holding midfielders are occupied. If they don't commit to press, we've seen the effects as it gives time for players like Ribery or Robben to pick their heads up and hit balls over the defense. We've scored two goals this season that way.

The whole concept at the beginning of possession, in abandoning the center of the formation, is an illusion. Either the opposition defense can hold firm to its system and leave men unmarked or unpressed in the build-up for Bayern to play the ball long, or they can abandon their structure. The numerical equality of 8 in attack against the 8 in defense is directly designed to force 1-on-1 matchups, and the space in the middle allows Bayern to constantly shift in and out, or down and up across the field, facilitating rapid movement down the wings or through the center should the seams open.

In theory, this attack is very fast, full of a multiplicity of combinations that allow rapid transitions across the field. It's a very interesting idea, and so far the problem hasn't been in implementation but in reading and responding to each others's games; knowing when to move forward and when to move back; knowing who is covering what space. Those pieces of information which only come with time spent training on the pitch.

Simply put, Javi Martinez is not capable of playing this role for Bayern Munich. He does not have the vision, attacking acumen, or creative ability to distribute play in such a complex manner from so deep on the field. To be fair, no player on this squad except Schweinsteiger or Thiago have those qualities. I love Javi Martinez but these are not his skills. In fact, what this whole system means is that Javi Martinez is a centerback for Guardiola. The dynamic shifting requires spatial awareness, good positioning ability, and good short range passing ability. These are things that Javi Martinez has in spades.