Last Saturday's win over Borussia Mönchengladbach was fraught with defensive miscues and there is some serious work to be done in MatchDay 2. Let's break down two different examples from MatchDay 1 in preparation for tomorrow's match.

Share All sharing options for: Bayern Munich's 4-1-4-1 defensive miscues and lessons for MatchDay 2

Last Saturday’s victory over Borussia Mönchengladbach, while won by a comfortable scoreline of 3-1, was fraught with defensive mistakes and miscues as this Bayern Munich squad struggled on the defensive side of the ball to implement Pep Guardiola’s vision of the 4-1-4-1. Given better finishing from Mönchengladbach, this match probably ends as a draw. To that end, tomorrow should prove to be a very enlightening match as this team needs to take step forward in the defensive half of the field. However, it is worth looking back at some of the issues that plagued the Bayern Munich last weekend. Let’s start with the own goal.

The Bayern Own Goal 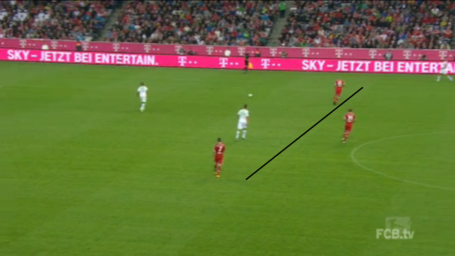 This example is very illuminating for the simple fact that ‘Gladbach are playing out of the back and the Bayern Munich defensive structure is already established. As we can see, Bayern has elected to setup a 3 man press at the front in an attempt to win the ball. Behind them is a 3 man midfield line, and a 4 man back line. 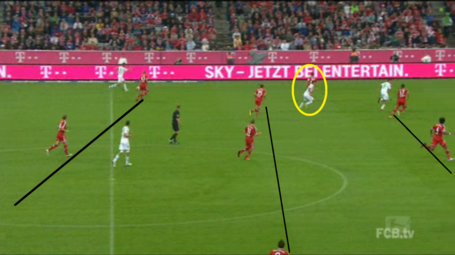 As Gladbach swings the ball out to the wing, Phillip Lahm has to step up and cover the advancing midfielder. The narrow 3 man midfield is a problem when advancing the opposition advances down the wings. Dragging Lahm out of position, opens up space down the flank that Gladbach exploits as the CAM interchanges wide. In response Boateng, has to abandon his mark moving to cover the crosser, which opens up space for the left midfielder. 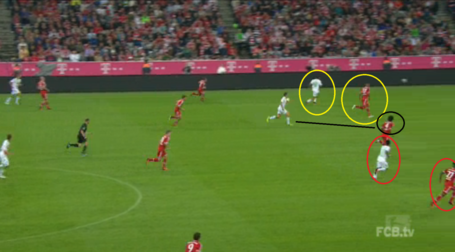 This forces Dante to adandon his mark and move into space both for covering the expected cross and denying space for the advancing left midfielder to run into. In this case, it is Alaba responsibility to shift centrally and cover the striker. 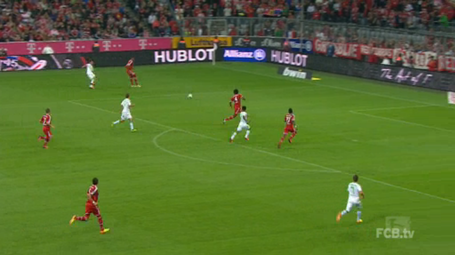 The only problem is that Dante can’t see behind him and Alaba is wide. Unfortunately, Dante can’t directly assess that situation behind him, has to cover the cross, and miscommunication with Neuer ends up depositing the ball in the back of the net.

The main takeaways from this sequence are that there is a lack of width in the central midfield and that a lack of press or a failed press from the front has the potential to end in a bypass of the entire midfield. Bayern needs to defend with width, either shifting up the defensive fullbacks and dropping the pivot player (midfield line of 4 - back line of 3) or shifting from a three man press to a two man press with two banks of four. In addition, they need to reduce the space between the lines. Much of this attack succeeds simply because the defense and the midfield have too much space between them for Gladbach to exploit. Lahm has to completely abandon his position to respond to the advance 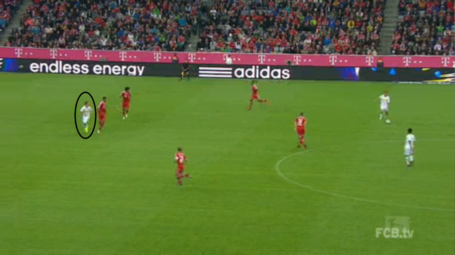 In this example, we see 'Gladbach moving fast on the counter as the fullbacks move to reform the defensive line. Max Kruse is loitering offside on the back shoulder of Boateng, at this point not a threat. As 'Gladbach swings the ball out to the left, we see the defensive line set their shape. Unfortunately, Jerome Boateng tracks Kruse, breaking the line. 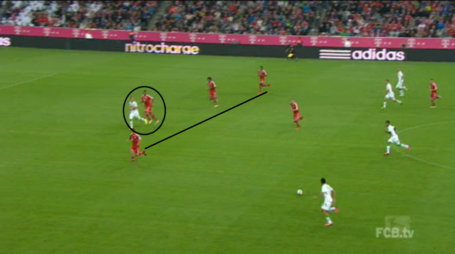 As the attack from Gladbach progresses Kruse checks his run and puts himself onside.With Boateng having broke the line, Lahm can’t commit to preventing Gladbach from playing the ball wide because Boateng can’t step up and challenge the oncoming attacker. Furthermore, with Kruse being on the back side of the Boateng, Schweinsteiger has to track into line with the backline to cover Kruse as Dante is occupied with covering his own attacker. 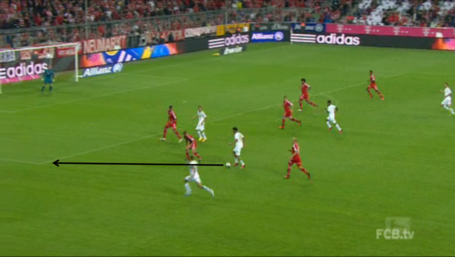 As the ball is played wide, now Lahm can commit to challenging the cross as Boateng moves into position on the near post to block the cross. Unfortunately, with Schweinsteiger and Dante having to mark the advancing attackers and without a midfield presence, the entire top of the box is left unmarked. 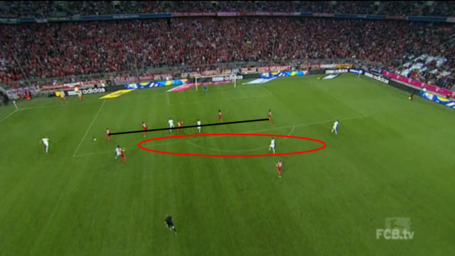 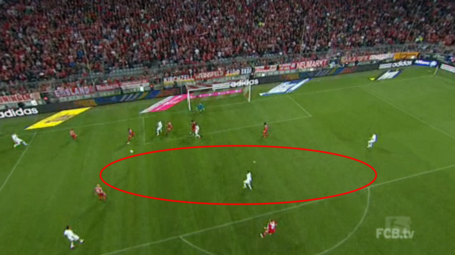 The Mönchengladbach cross is played in and only an on his toes Manuel Neuer prevent Gladbach from putting one back in the net.

In this piece of defense we can clearly see that early mistake from Boateng causes some very serious issues as the attack progresses, and the lack of a midfield presence in defense allows tons of space in the attacking third for Mönchengladbach to exploit. We’re looking at a two man midfield and a 5 man backline as the three attackers are further upfield. We could think is an artifact of Boateng’s mistake but the following is from later in the match as ter Stegen puts a long punt forward to clear out his box. 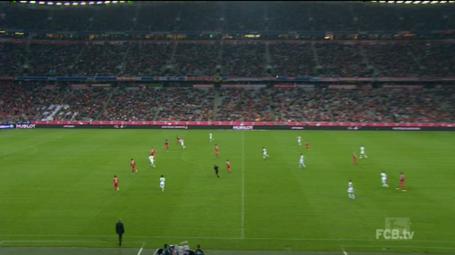 We see the clear three man press at the front with a two man midfield and a 5 man backline as the single pivot steps into defense.

Guardiola's implementation of the 4-1-4-1 is a system designed to immediately win back and recycle possession, but last Friday the space between the midfield and attacking lines was too vast to do so reliably or to blunt the Mönchengladbach attacks effectively. There are two major defensive themes that need correction going into tomorrow. One is the lack of width in midfield defense. Two is reducing the space between the defensive lines and compacting the field. Here's hoping tomorrow brings success in both these endeavours and a win for Bayern Munich.