Pep Guardiola, the 4-1-4-1, and Tactical Flexibility

Share All sharing options for: Pep Guardiola, the 4-1-4-1, and Tactical Flexibility

Over the last several weeks, hints and murmurs have come out from the FC Bayern friendlies that painted a picture the Pep Guardiola was looking to tactically reshuffle the Bayern squad. For a team that has played almost exclusively the standard archetype of the 4-2-3-1 formation to enormous success for years; the idea that they should shift to a more nuanced and variable tactical makeup was somewhat jarring to say the least. "Why fix what isn’t broken?" goes the saying. Yet the rumors and stories came out. Pep is going is use a false 9. Whatever. Pep wants Franck Ribery to play as a #10. Ok. Pep is experimenting with a 4-1-4-1.

With the purchases of Thiago Alcantara and Mario Goetze, and the transfer of Mario Gomez to ACF Fiorentina, what immediately becomes clear is that Bayern is going to stack the midfield to a ridiculous degree and the 4-1-4-1 is a formation uniquely suited to that end.

The 4-1-4-1 is a relatively recent organic development and actually stems from either the 4-3-3 or from the 4-2-3-1. In many ways, it is the formation’s next tactical evolution in an era defined by a paradigm of soccer stressing possession as a defensive strategy. Most notably Spain used this in the final of Euro 2008 to great effect in containing a powerful German side, while since that date Germany has dabbled in the formation to both great delight and great sorrow at times. The formation itself is predicated on maintaining the all-important midfield triangle that is so key in both the 4-2-3-1 and in the 4-3-3. From the 4-2-3-1, the formation comes about by pushing a holding midfielder into an advanced position, while in the 4-3-3 it requires the wide players to be true 2-way players rather than the wingers. The true power in this formation is tactical flexibility in that with single swaps of players, the 4-1-4-1 can immediately transition into either of the other two formations or even into a 4-4-2 if needed. This allows the team to react quickly and effectively to changes made by opposition sides. However, before we dig too deep into what Bayern can do with the 4-1-4-1. Let’s look at some previous teams who have used the 4-1-4-1 and how they used it.

In the Euro 2008 semi-final against Russia, using a 4-4-2 variant, Spain’s David Villa went down injured forcing the team to make a vital change, and one that cemented their victory as they marched on Russia to a final 3-0 score line, before defeating a strong German squad 1-0 in the final. The replacement of David Villa with Cesc Fabregas forced the Spain team into the 4-1-4-1 and the dominating presence of Senna, Xavi and Fabregas allowed Iniesta and Silva to drift inside and out causing fits for both of their opponents. The key in this was the solidity of that midfield trio.

Following World Cup 2010, Jogi Low began experimenting with the 4-1-4-1 to both great and horrendous effect. The key piece for the Germans was the Schweinsteiger and Kroos combination.Much like Xavi in the Spanish midfield, Kroos provides a very key link as he functions as a two way player between the holding midfielder and the CAM. This dual functionality is the key when playing with a non-traditional CAM partner in the center of midfield. Low experimented with CM partnerships of Kroos-Oezil, Kroos-Goetze, and Oezil-Goetze. The first two pairing worked magnificently, while the third flamed out in disastrous style against Switzerland as the Swiss eviscerated the Germans for their first win against them in over a half century (Of note: Jogi Low needs to lay off the crack because who puts two false 10’s in a formation designed around midfield dominance and possession? That’s suicidal.) This demonstrates to us that the midfield partnership trio has to contain one two-way player in the center midfield.

Assessing the options for Guardiola

In reality, Bayern has been playing a hybrid 4-2-3-1/4-1-4-1 for the past year with that midfield pivot of Kroos, Schweinsteiger and Martinez. The fact of the matter is that Bastian Schweinsteiger is one of the best players on the planet and is already the player required to make the 4-1-4-1 midfield hum in unison. Schweinsteiger can drop deeper and play out with the centerbacks, much as we saw him do in London against Dortmund when under pressure, or he can move forward playing a more advanced role. When the former is the case, the two way CM is absolutely required to shuttle possession forward. This is where both Kroos and Alcantara become really valuable.

In many ways, this strength of this formation is built around the complete game of Bastian Schweinsteiger. His defensive and offensive games are so complete, that it allows the Bayern to run a 4-1-4-1 that doesn’t require both central midfielders to be possession oriented like Spain was required to do. 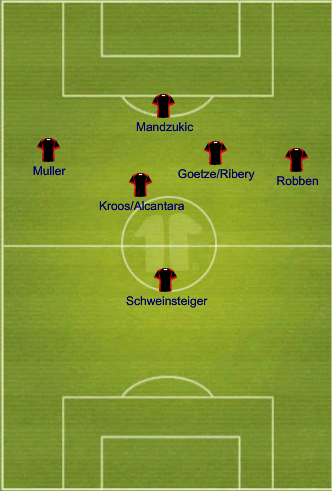 This allows Pep Guardiola to mix and match his midfield partner with the two way pivot player, utilizing Goetze to great effect as a mobile CAM or playing Franck Ribery as a false 10.

Conversely, should it be the case of Schweinsteiger’s day off (because he never gets injured.It’s in the soccer rulebook if you don’t believe me. It’s right after the part where it says Zlatan is a demi-God.) and his unique skillset cannot be utilized, Guardiola can switch to a more possession based style. 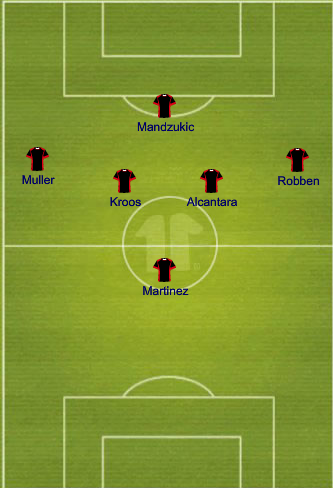 In this, Javi Martinez can partner with Kroos and Alcantara to play a high possession style. This allows Guardiola to mix and match on the wings, giving his wide players much more latitude in how they approach the match.

In all of these formations, it’s a simple switch to either a more attacking or a more defensive positioning without any tactical overhaul mid-match as the play style for these different formations are so similar. For example, a Luis Gustavo for Mario Goetze single substitution allows a transition straight into a 4-2-3-1 and gives a more defensive style of play. Or alternatively, swap in a Ribery for a Goetze and suddenly we’re playing 4-3-3 with Ribery and Robben assaulting the wings. These are just some easy examples.

However, the true test of this system in going to come down to how Bayern responds in defense. Jupp Heynckes had this team down to instinctual defending. Their defensive solidity was incredible the entire last campaign. Their two banks of four were continuously compact and tight, moved as synchronous units, and constantly reformed after pressure. Guardiola would have to be a massive fool not to continue developing this in this team. If he believes that possession is going to be the key to preventing defensive problems in the Bundesliga with a 4-1-4-1, teams like Borussia Dortmund and Borussia Monchengladbach are going to eviscerate this team on the counter and afterwards feast on Guardiola’s entrails with a bottle of Frank’s Red Hot sauce and a nice Chianti. The attacking and possessive strength of the 4-1-4-1 cannot come at the price of defensive weakness, especially in this league.

As we approach the final ramp of the pre-season into the competitive fray that begins in August, some of these questions should be answered as we face the likes of Barcelona, AC Milan and Manchester City.