At first sight, he looked slightly nervous. A few beads of sweat were visible on his bald head. He was suited up smartly; he answered each question in the right manner. He was turning out to be more likeable than ever imagined. However, that perception may have been wrong.

Share All sharing options for: Pep’s Way: Thoughts on Guardiola's reign so far

Pep has not been the head coach long enough to eradicate the memories of Jupp Heynckes. Yet, he is seemingly looking to do exactly what was feared at first - make drastic changes.

When Mario Gomez drove out of Trentino, a few heads surely turned despite the inevitability of this transfer. Media reports suggested that Pep would give Super Mario a chance. Perhaps there was some truth in those statements as Karl Heinz Rummenigge told us Mario himself wanted this move. Nonetheless, Gomez obviously left because he felt unwanted.

Thiago Deal Done? The Latest Updates Would Suggest So... 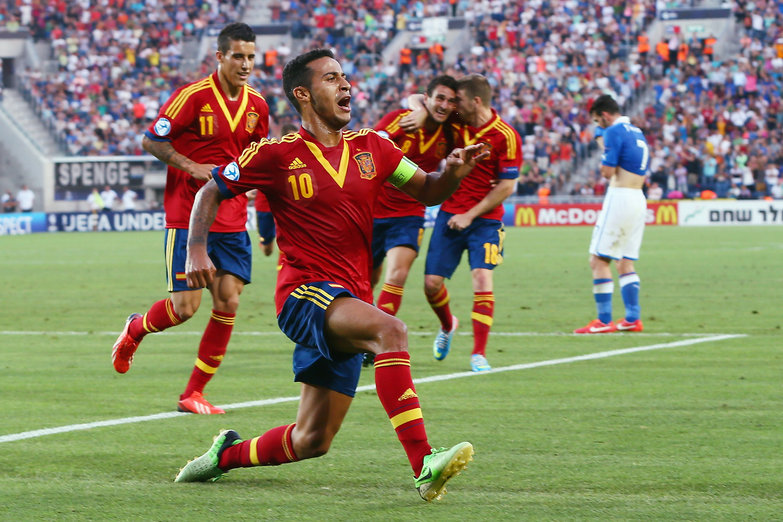 Thiago in? Thiago out? Some reports have the deal done, while others have nothing definitive. What do we believe?

Later, reports emerged that Pep wanted Neymar but Bayern bought Mario Götze because they felt he was better suited to German football. Guardiola now is seemingly determined to have his way with the next transfer. He is asking for Thiago Alcantara. What does not add up is that Bayern has a host of players who are of exceptional quality- much better than the aforementioned Catalan.

The matches so far have not reflected drastic changes. Guardiola has opted to play a 4-1-4-1 of course. This might be down more to Basti's absence and Javier Martinez's late start than anything else. Bayern still attacks from the wings predominantly. Toni Kroos still strikes from distance. Mario Mandzukic still appears suddenly out of nowhere in front of goal while Thomas Müller still provides unique moments of absolute genius. Nonetheless, Guardiola is tinkering; he has promised to tinker using a falsche neun as well.

Why fix something which is not broken in the first place?

The obvious argument is of course that other teams will now start adapting to Bayern and hence, Bayern must do things differently to keep up their dominance. However, teams have not found a way to adapt to rigorous pressing. Bayern and Dortmund can walk through any team besides each other (and in BVB's case, Stuttgart) because of this aspect of their game.

The second reason is of course that Pep perhaps wants to turn Bayern into his Barcelona side, a side which had Johan Cryuff mapped onto it. We expected him to realize that Bayern is a team littered with physical players who are also stylish. The physical aspect of their game helps them to overcome opponents using power sometimes. Barcelona to a certain extent was overwhelmed by the power. However, that does not seem to be the case.

Guardiola is seemingly overseeing a shift gradually from a bigger side in terms of sheer size to a smaller one. By getting rid of the second defensive midfielder, he is in fact getting rid of either Luis Gustavo, Daniel Van Buyten or Dante (as Javi Martinez might be shifted to center back) who are both physical players with an eye for a pass. In Thiago, he is trying to bring in a player who is smaller than the majority of Bayern's players. He let go of a huge center forward in Mario Gomez in favor of a small Munich born Ruhr player in Mario Götze.

The players so far seem enthusiastic about the ideas implemented by their new manager. As soon as Captain Philipp Lahm makes a remark that seems slightly off the mark, we will know that something is not right in the camp.

The achievements of Bayern from the previous season are remarkable and can surely only be topped by yet another spectacular Bayern team. However, is Guardiola taking the team in the right direction by trying to make them seemingly more Barcelona-esque? Or is the perception that he is trying to make the team more Barcelona-esque wrong? Should he simply continue the great Heynckes' legacy?Let me hear your thoughts on Guardiola's reign so far.