In what was a somewhat nervy experience, FC Bayern walked away the victors in the 2012/2013 DFB Pokal in a deserved 3-2 win over VfB Stuttgart. Their play in open play was impressive and secured the necessary goals to hang on and win over the couse of 90 minutes. However, this win highlighted one of the main weaknesses that has vexed the Bayern squad this season, and in seasons past, and nearly was their undoing.

Bruno Labbadia's choose to line up his Stuggart squad in its standard 4-2-3-1 formation, with the unusual decision to use 22 yeard old Alexandru Maxim as the center attacking midfielder. This choice by the former German international coincided with a rotational and shifting strategy with this attacking mdfield. Quite frequently, Stuttgart shifted Maxim to either side and attempted to overload Bayern's flanks. This was quite effective in the first 15 minutes, as Harnik (playing as the left attacking midfielder) and Maxim combined to overload Phillip Lahm and force challenges at pace with the slower Daniel Van Buyten. Bayern was lucky not to concede in the first few minutes. In response, Bastian Schweinsteiger shifted right and deeper and drastically cut the effectiveness of this strategy from Stuttgart as he occupied and removed the space they were attempting to operate in.

While Stuttgart did shift employ this one side overload using Traore and Maxim, it did not work to the same effectiveness as the Harnik/Maxim partnership. In response, Labbadia shifted Traore and Harnik back to their regular sides of left and right respectively, but this was ultimately unsuccessful as the faster Jerome Boateng was able to close down and remove space.

In reality, Maxim was largely ineffectual past the 15th minute and until his removal in the 62' for Okazaki, Stuttgart was very weak in attacking from open play. Unfortunately for Stuttgart, this had the effect of cutting of Harnik's effectiveness on his wing. With Okazaki's introduction, he re-balanced the attack and Stuttgart was much more dangerous in the last half hour than they had been for quite some time in this match.

As the first half wore on, Bayern generated great forward progress as the attacking fullbacks blazed up and down the wings unimpeded by the Stuttgart midfielders. I'm not sure the word defense is in Harnik's vocabulary but specifically his lack of defensive contribution was a problem that Bayern took full advantage in exploiting. In particularly, when Harnik was lined up opposite Phillip Lahm as he was at the start of the second half.This lack of defense on the wing, allowed Bayern to spring Robben 1v1 against Molinaro, and with no midfield partner, the overlapping Lahm, drew out the Stuttgart centerback and forced the numbers mismatch inside the Stuttgart penalty area, allowing the wide open Mario Gomez to stumble the ball into goal. 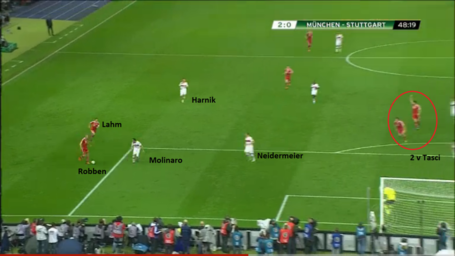 Bayern's Set Piece Defense
Once again, Bayern showed real weakness on set pieces throughout this match. It has been their true Achilles heel all season, but tonight it reared its head in a rather brutal manner as a man marking mistake and a clearance mistake allowed both goals for Stuttgart and an additional handful of very stressful chances. This needs to be worked on, because given their ferocious dominance in open play, Europe's best are going to take notice and they are going to target this weakness.

Bayern was able to hang on to the end of the match and secure the first treble in German history, joining a very short list of clubs worldwide that have accomplished this great feat and earning their fourth trophy of the season. We approach this offseason with both anticipation and trepidation, both at the prospect of defending the trophy's we have won and the changes that are about to come to this beloved club. The one thing we know is that we are excited for them to work on their set piece defense. Seriously, they are going to give us all heart attacks if they don't.