With Bayern recently winning its fifth European Cup/UEFA Champions League title, I have seen many posts here and elsewhere about Bayern getting a fifth star on the shirt next year. This, however, is not the case. The star system is determined by domestic titles, not by Champions League titles. The system is easily explainable, but since I am making this a longer post, I might as well explain the background of the star system in Europe and how the UEFA Champions League is (often) separate from this. Most of this post will use information from this Wikipedia article, so if you want to read that as well, I encourage it.

The first star system can be traced back to Italy with Juventus winning its tenth title in 1958 and adding a star above its crest as a symbol of this achievement. The practice was standardized in Italy later on and now one star equals ten titles. As such, Juventus currently has two—note Juventus claims 31 titles but was forced to vacate two of them due to the Calciopoli—while A.C. Milan and Inter both have one star for 18 titles each. 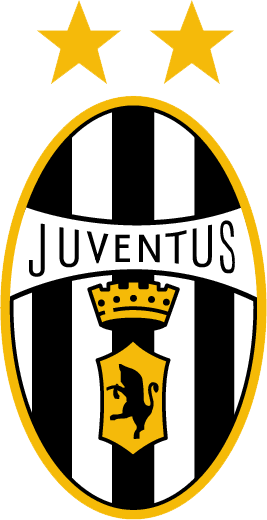 The old Juventus crest with two stars representing its 29 league titles. Via upload.wikimedia.org

The German system is much more complex. Known as Verdiente Meistervereine (roughly translated as "Distinguished Champion Clubs"), it was first introduced by the DFL in 2004 as a way to honor those clubs who have won the Bundesliga and other leagues multiple times. The system gives one star to those who have won the league three times, two stars for five times, three stars for ten times, and four stars for twenty times. Don't ask me what the significance of the numbers is as I have yet to figure that out myself. No team has won the Bundesliga more than ten times outside of Bayern, so while Bayern has four stars for its twenty-two Bundesliga titles, the next closest teams are Borussia Dortmund and Borussia Mönchengladbach with five titles and two stars. Werder Bremen (four titles), HSV (three titles), and VfB (three titles) each wear one star.

This, however, is where things get confusing with the German system. Following a protest from some former East German teams that is explained in the link above, the DFB created a stipulation that all clubs not playing in either the 1. or 2. Bundesliga could wear one star in recognition of all of the titles they had won either before the creation of the Bundesliga or in East Germany. This star has the number of titles won by the club inscribed in it. As a result, clubs such as Berliner FC Dynamo (who caused the whole mess) can now wear a star so long as they do not play in either the 1. or 2. Bundesliga. 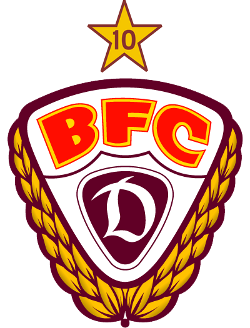 The DFB sanctioned star. Note the inscription. Via upload.wikimedia.org

Most other leagues around Europe follow the Italian model with one star meaning ten domestic championships. Examples include Austria, the Czech Republic, Hungary, the Netherlands, Poland, and Switzerland. Other leagues—such as the French and the Scottish Leagues—allow clubs to pick their method. As a result, Celtic's star refers to the 1967 European Cup, but Rangers wears one star per ten titles for a total of five. In other locations, there are examples that simply do not make sense. Manchester City wears three stars in an attempt to look cool, while Panathanaikos wears three stars (one gold, two silver) in recognition of its trip to the 1971 European Cup Final, the 1985 European Cup semi-finals, and the 1996 UEFA Champions League semi-finals. Needless to say, both of the last two teams are mocked mercilessly for this. Note that neither England nor Spain have a system relating to stars above the crest.

UEFA Champions League/European Cup titles usually do not determine whether or not a team wears stars above its crest (although there are exceptions like Celtic). Instead, certain factors determine whether or not the club receives official recognition from UEFA on its kit. In order to receive this recognition, a club must win the Champions League either three times in a row or five times overall in order to receive what is now called the multiple-winner badge, otherwise known as the Badge of Honour. The badge was created in 2000 as a way of honoring those clubs who had been awarded the trophy permanently. Prior to 2009, clubs who fulfilled either of these requirements would receive the actual European Cup permanently—instead of being presented with the replica that UEFA now uses—and the counter would reset so that teams have to fulfill one of the requirements again. Liverpool was the last club to be awarded the trophy permanently before trophy stopped being awarded permanently, while Real Madrid was the only club who fulfilled both requirements. Bayern was the last club to win the cup three times in a row.

The original Badge of Honour. Via 4.bp.blogspot.com

The Badge of Honour is worn on the left sleeve during the competition. Five clubs wear this badge during Champions League play: Real Madrid, 9 times winners with three in a row and then five overall; Ajax, three in a row from 1971-1973; Milan, fifth title in 1994 (seven total); Liverpool, fifth title in 2005, and Bayern, three in a row from 1974–1976. All of these clubs also fulfilled the qualifications for being awarded the trophy permanently before that practice was discontinued and therefore possess the actual trophy as well. If a club has not fulfilled the requirements, then this badge is not present on the sleeve of said club. Barcelona has four titles, while Manchester United and Inter have three, making them the most likely candidates to next receive this badge.

So what does this all mean? Stars above the crest normally have absolutely nothing to do with titles in the European Cup/UEFA Champions League and instead are determined based on domestic titles and that league's system. The exceptions are Marseille, Celtic, Nottingham Forest, and Aston Villa (worn in the crest). There are other anomalies as a result of European competitions (UEFA Cup and European Cup Winners' Cup), but these are the examples that relate directly to European Cup/UCL titles. The national teams are relatively easy to remember, as most of them have one star per FIFA World Cup title.

In short, remember that the German system goes one star for three titles, two for five, three for ten, and four for twenty or more, while most systems follow the one star equals ten titles rule. And to stave off the inevitable question about adding a fifth star to the German system, I have no idea if there will ever be a fifth star added to it. I unfortunately cannot help with that.