WE ARE THE CHAMPIONS OF EUROPE!!! Because that is how we roll

In what was an enthralling clash at Wembley, Borussia Dortmund and Bayern Munich displayed to the world exactly why their rivalry is one of the greatest in the world, and one of the most fun to watch. With this being the 5th meeting between these two German powers this season, there was a very clear knowledge displayed by both coaches in how to attack each other’s weaknesses. This game came down to execution, and the form of their goalkeepers. Manuel Neuer and Roman Weidenfeller put in keeping performances for the ages as they put on a show in their respective penalty boxes in what ultimately was a 2-1 win for the Bavarians.

The hallmark of Borussia Dortmund for the last three years has been the high press and the counterattack. It has been the quintessential adaptation in Bayern Munich’s game this year, that they learned from Dortmund. The Dortmund high press gave Bayern fits in the first 20-25 minutes, as the Bavarians were definitely in a special mood. With an intent to play slow deliberate football soccer, the intense pressure of the men from Westphalia, caused turnover after turnover. It certainly didn’t help that Bayern’s passing was pretty wretched to begin the game.

In addition, Dortmund played a deliberate high press and double team defense on the wings, halting both Franck Ribery and Arjen Robben’s advances and forcing play back into the defense who were under further pressure. With the halting of their forward movement, Bayern were unable to bring either David Alaba or Phillip Lahm into the attack in any effective manner, and their attacks were ineffective. As a consequence of this and the Dortmund pressure, Bastian Schweinstieger dropped deeper into defense trying to find the game, opening a large hole in the midfield that the Dortmund midfielders happily filled.

In response to the press, Jupp Hyenckes saw fit to begin his now unsurprising rotation sequence of the attacking band. The only really true surprise this time was the integration of Arjen Robben as well who played all over the pitch. In what was arguably one of his best games in a Bayern uniform. he gave the Dortmund defense fits all night and it was only fitting that he tucked in the game winning goal in the 89th minute. As all 4 attacking players swarmed all over the pitch, they found holes they were able to exploit leading to effective quality chances. This movement, forced the Dortmund holding midfield to not push as high, and allowed Bastian Schweinsteiger to move forward out of his hole in the backline. While the Dortmund press still effectively pinned his back, his distribution and play allowed Bayern to earn a foothold in the match that until that point they had really been lacking.

As the match wore on into the second half, we save the limitations of Marco Reus exposed as the Bayern holding midfield was able to assert itself on the game. Without any time or space, Marco Reus was virtually invisible for most of the second half, except for the handful of times he was able to get in on the defense where he was an absolute handful. This included winning a penalty on a challenge, that if we are being honest probably should have earned Dante his second yellow card and his marching orders. Reus needs time and space to be effective, and when that is denied, he tends to vanish from games. I hope Klopp doesn't continue this plan of using Reus as a CAM because he is a joy to watch on the wings.

As the second half began, Bayern brought a new approach into the game in conjunction with the rotating attacking band. Bayern began to switch play from side to side in conjunction with their rotation. As one of the wide midfielders tucked into the center, cross field switches found both fullbacks advancing into the attack. From this point on, Bayern dominated the chances and controlled the game as their interchange and their numbers in attack swelled. 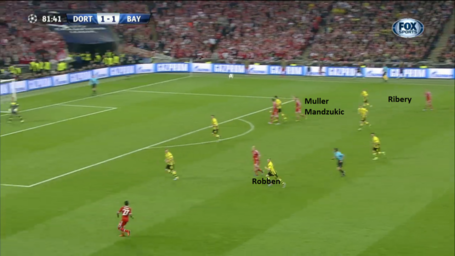 In this example, we can see that Alaba has advanced down the flank to receive a cross field pass wide open in space. His ability to do so is aided by Arjen Robben tucking into the center, pulling Blaszczykowski out of position and exposing the flank.

In what was an end to end affair for 90 minutes, this was easily one of the most fun and entertaining soccer games I have ever seen as neither team were really able to totally assert themselves in the match. This was a testament to their skill, their history, and their numerous clashes and I look forward to the encore in next year’s Champions League final(fingers crossed).