Under the assumption that Mario Gotze will be unable to play come game time this Saturday for the UEFA Champions League Final, we take a look at the alternate options available to the man with a blonde badger perched upon his head.

Unless you've been living in a cave for the last month, you would know that in the second leg of Borussia Dortmund's win over Real Madrid in the UCL semi-finals that Mario Gotze, the dynamic Borussia Dortmund center attacking midfielder, pulled up in the 14 minute with a hamstring strain. His status for the final this coming Saturday has been a point of constant speculation, and while he just began running exercises again yesterday and Jurgen Klopp is optimistic, he came out of practice this morning and according to reports will undergo an MRI tomorrow. With this in mind, it behooves us to take a look at the alternate options that Borussia Dortmund can bring to the table.

We can probably safely assume they are going to play their normal 4-2-3-1. With this being the game of the year, the wide attacking midfielders are going to be first choice, meaning it Marco Rues is going to play left and Jakub Blaszczykowski is going to play on the right. While Marco Reus played attacking midfield following Gotze departure in Madrid, as well as in their defeat to Hoffenheim over the weekend, the fleet flooted German international thrives best while drifting and playing fast counterattacking soccer. While Reus is capable of playing this role, the two most recent attempts both ended in defeat for Borussia Dortmund, and given that the opponent in this particular match has quite possibly the strongest holding midfield in the time space continuum, Dortmund is most likely going to have to go with the alternate option of Ilkay Gundogan. If I'm wrong, I'll eat my hat, provided first you bake me one made out of cake.

Gundogan' s development this year has been remarkable and has stepped up as the deep lying playmaker in Dortmund's counterattack system, feeding and supply the attacking set of Gotze and company. With Gotze down and out, Gundogan has been Jurgen Klopp's choice to step up into the attacking midfield band and assume the main playmaker duties. He played this role in the first 15 minutes of the 1-1 between these two sides earlier this month performing well against a second choice Bayern team.

With Gundogan moved up from his holding midfield partnership, this leaves the holding midfield slots open for Jurgen Klopp to employ his tactical trickery in. His normal choice before Gotze's injury was to utilize Gundogan in the playmaking role, while using either Sebastian Kehl or Sven Bender as his alternate partner. Luckily for Dortmund, they also have Turkish international, and former Dortmunder Nuri Sahin on loan from Liverpool (although in his current form he scares me about as much as being in a goose down pillow fight).

Dortmund will approach this one of two ways. Either go head to head with Bayern in the middle of the pitch and pit Sven Bender and Sebastian Kehl against the Bayern attack, or they can partner one of that pair with the more distributive type in Sahin. So far, when Gundogan has played in the attacking role Klopp has chosen to employ Sahin with either Bender or Kehl. I'd expect this secondary configuration. For arguments sake though, let take a look at both midfield configurations. 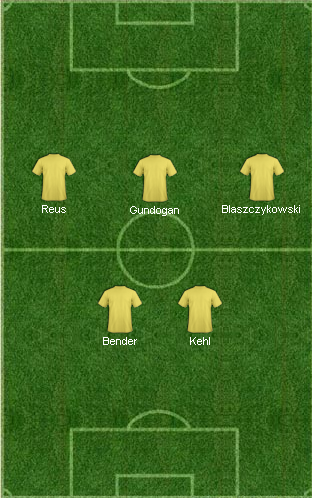 All formations created on footballuser.com

If Kloop chooses to partner his holding midfield with Bender and Kehl, this will be a direct signal that Dortmund is going to play a straight up counterattack strategy with no bells or whistles. By placing his strongest ball winners in the center, Dortmund should effectively neuter forward progress in this zone for Bayern, followed by direct play out to the wings. With the speed of Reus and Blaszczykowski, this effectively bypasses the equally strong Bayern midfield, to directly hit on the counter. This would be the biggest gamble strategy Klopp could run out as it is rather one dimensional and if it fails, Dortmund isn't left with many options for breaking down the Bayern defense

Defending against this strategy would necessarily consist of the Bayern full backs effectively marking and controlling their zones after turnovers in possession. Given that the Bayern fullbacks are going to be Phillip Lahm and David Alaba, this should be a relatively straightforward, albeit engaging task given the quality of the Dortmund wingers. If successful, without Reus, Blasczykowski and effective wing play, this becomes a battle in the center for Dortmund with Ilkay Gundogan up against both Schweinsteiger and Martinez, which is a hilarious thought. 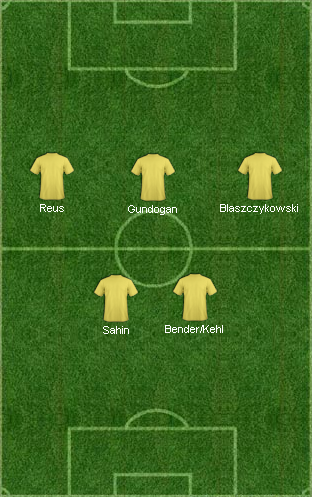 This is by far the more preferable option for Dortmund as Sahin provides a distributive conduit to Gundogan, and vice versa. Both of these players are capable of either direct creative play or capable of feeding runs for wing players. This is a much more dynamic playbook for Klopp to use, and doesn't pigeon hole the Dortmund side.

For Bayern, to counter this strategy requires the same high press system that Bayern has been playing for most of this season. Muller and Mandzukic must respond with immediate pressure and disallow Sahin and his partner from having time on the ball, forcing them to make conservative passes and preventing free play into Gundogan or out to Reus and Blaszczykowski. This would blunt most of the counterattacking potential and gives the Bayern defense time to organize against an effective counter. With Dortmund in possession, this becomes Bastian Schweinsteiger and Javi Martinez against Gundogan and Sahin in the center of the park, which given Sahin's rather uninspired form since rejoining from Liverpool is rather comforting to a Bayern fan.

Much of this match is going to come down to execution. With Bayern Munich falling to sides employing counter attacking strategies on several occasions last year, including the Champions League defeat to Chelsea and the DFB Pokal defeat to Dortmund, they have spent a great deal of this year increasing defensive solidity and instituting the high press system, all with the aim of facing counterattacking sides effectively. Both of these teams excel at wing play, and asking each to try to blunt either team is going to be a very tall order defensively. The battle for this is going to come down to the center of the pitch and who can control the movement through it most effectively.