9.0 on the Richter: Bayern München shake Europe with 7-0 defeat of Barcelona | Tactical Recap

FC Bayern München showed their defensive solidarity, along with skill in the counterattack and in wide play over 180 minutes in an evisceration of FC Barcelona by a final aggregate scoreline of 7-0.

Share All sharing options for: 9.0 on the Richter: Bayern München shake Europe with 7-0 defeat of Barcelona | Tactical Recap

FC Bayern München maintained their defensive solidarity from leg 1 of the Champions League semi-final, hit on the counterattack and thoroughly humiliated Barcelona 3-0 on the night and 7-0 on aggregate.7-0 on aggregate is an absolutely incredible finish to this tie. FC Bayern München were absolutely incredible in team play and their tactical approach to both legs left Barcelona out of ideas when trying to break down the Bavarian’s defensive wall.

Defensive Compactness
Maintaining a strong defensive posture, Bayern Munich played a straight up 4-4-2 on defense with rigid compacts lines in both the back four and in the midfield. This compactness forced Barcelona away from attacks in the middle of the pitch, forcing action towards the wings. In maintaining this defensive position, the 3 attacking midfielders and Mandzukic all at different times occupied the 2 wide positions in the 4-4-2, further reinforcing the defend as an entire team mentality they approached both legs with.

While this defensive strategy was identical to that of the first leg, in the end it was implemented differently with Barcelona’s choice to sit Lionel Messi on the bench. Without the necessary requirement of preventing Messi from doing anything, the defensive midfield was freed to move higher up the pitch, marking the line of Barcelona’s midfielders when Barcelona began play out of the back. 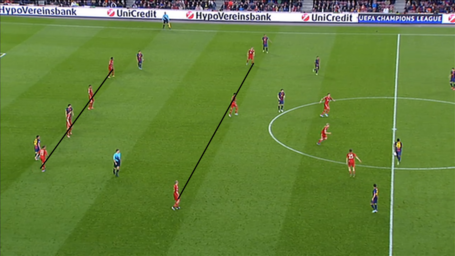 As Barcelona attacks were pushed up of the pitch, the tactic was to press and force play to the wings in the same vein as last week. In this case, the 4-4-2, was uniquely suited in attack as the Barcelona attack was pushed onto the wings, they were overloaded by 3 Bayern players to the 2 of Barcelona, forcing turnovers.

In cases where Barcelona was able to make deeper forays into the Bayern half, the two banks of four compacted forcing Barcelona into long range speculative shots or into crosses from wide positions that were easily cleared by the Bayern center backs. In the first leg Barcelona managed only 4 shots the entire match while in this game, they managed 15. The difference being in this match two-thirds of the Barcelona shots came from outside the penalty area, by players under duress and pressure from multiple Bayern players. This ineffectiveness was only compounded with Cesc Fabregas and the ghost of David Villa supplying the shooting. 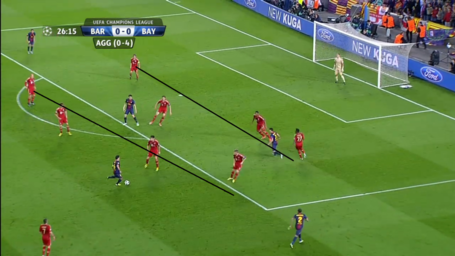 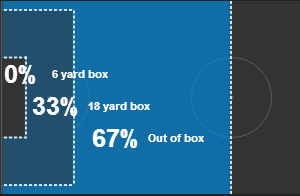 Break Wide and on the Counter

In exactly the same manner as last week, upon winning possession from Barcelona, Bayern Munich immediately spread the field and moved the attack up the wings. While the counterattack was a very important part of their game, more important was establishing width and creating channels for the attacking players. In the below example, Alaba wins possession in the box and within seconds has spread play wide to Ribery in traffic. Within seconds, Bayern has stretched the Barcelona’s center forcing Xavi wide to pick up Ribery, while Dani Alves picks his butt off the grass.

In this, the pass wide to Ribery forces Xavi wide, which followed by the link up with Müller also forces Bartra wide. With this Barcelona now has committed 4 players out wide, including 2 central players, while Bayern has not sacrificed any defensive solidness.

From here, the movement up the wing forces Barcelona out of position and wide into a position from which they don’t have the skillset to effectively attack a team like Bayern. Reforming their attack from this position wastes time, allows Bayern to reset when players are dragged out of position, and then the process starts over again.

With the 7-0 final scoreline, numerous articles are going to be written over the weeks until the UEFA Champions League final on May 25th about how Bayern defeated Barcelona What you should retain in your brain when you read these is that Bayern played complete and total team football, defended from the front and the back over both legs and prevented Barcelona from creating effective, quality chances by pressing and used the entire field to their advantage. They played football well in both attack and defense, with sound fundamentals and appropriate tactical awareness. This is what wins titles and trebles (oh, and a little luck that Messi was hurt and then absent).