The Old Lady Breaks A Hip: Bayern vs. Juventus Statistical and Tactical Recap

On Tuesday, April 2nd FC Bayern walked out the Allianz Arena with a 2-0 victory in the first leg of the UEFA Champions League quarterfinal by beating up on an Old Lady. The conclusion is that FC Bayern are big meanie heads. It’s not nice to beat old ladies. They give you cookies and stuff. They also provide statistical and tactical fodder.

Share All sharing options for: The Old Lady Breaks A Hip: Bayern vs. Juventus Statistical and Tactical Recap

Coming into the match, there was a lot of talk of Juventus modifying their tactics, perhaps switching from their standard 3-5-2 formation to a 3-5-1-1 or a 3-6-1. Those ideas were clearly wrong as Juventus ran out its standard 3-5-2 against FC Bayern's 4-2-3-1. What ensued was one of the most interesting tactical games I've seen in quite some time and can be broken down in several interesting battles that we should really be watching for next Wednesday when the these two forces do battle in Turin.

Pinning the Wings Back

The first 10-15 minutes of this game were quite tense as Juventus pushed forward following the 24th second David Alaba goal. In that time Juventus earned two corners but the FC Bayern defense did quite well to clear and prevent shots on goal. Following the injury to Toni Kroos and the introduction of Arjen Robben to the right side of the pitch, Bayern became an entirely different beast as Robben just absolutely terrorized Federico Peluso, the Juventus left wing back. Peluso was invisible whenever Juventus got forward, and had a nightmare of a game on defense that required near perpetual assistance from Chiellini and Marchisio. In contrast, his opposite, Stephan Lichtsteiner had a better game in attack but was just run roughshod over by Franck Ribery all night. Nearly 80% of Bayern's attacks came down the wings. 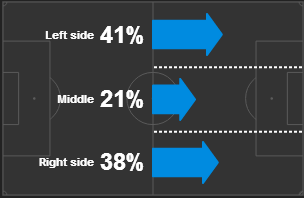 Andrea Pirlo was virtually invisible all night long, thanks to basic man marking from both Thomas Muller and Mario Mandzukic. In this case, Bayern took a direct leaf from Chelsea's playbook in the group stage when Oscar man marked Pirlo out of the game for seventy minutes (then Chelsea forgot a game lasts 90 minutes, and conceded twice to draw) while Juventus had possession. For Bayern, both Muller and Mandzukic harassed Pirlo all night long including at times engaging in a 20 yard run and press that forced turnovers. Pirlo ended the night with two turnovers.

Farther up the pitch, Alessandro Matri and Fabio Quagriarella were simply dominated by the Bayern defenders and holding midfielders, losing possession time and again under an intense press. Matri ended the night with three turnovers.

Old Ladies Can Learn New Tricks (because they aren't dogs, they're human beings)

With the absolute ineffectiveness of both the strikers and the absolute disaster of a performance from Federico Peluso, in was inevitable that at least one or two of them would be subbed out. It just happened to be that all three of them were removed: Matri and Quagliarella in the 65', for Vucinic and Giovinco, and Peluso in the 75' for Pogba. The striker substitutions had an immediate effect on hold up play and allowed Juventus to relieve some of the perpetual bombardment that Bayern had been showering on them. However, without Pirlo to playmake and move the attack forward, this did little more than just relieve pressure with the occasional foray forward. However, the substitution of the Frenchmen Paul Pogba came with a dramatic realignment of the Juventus line from the 3-5-2 ( or 3-5-1-1 with the 2 new strikers as Vucininc came deeper) to a 4-4-1-1 with Lichsteiner dropping back to fill the right back slot, Chiellini shifting to left back, with Pogba slotting in at the left midfield slot. This tactical readjustment allowing Juventus to begin making forays forward into the Bayern half, aided by their stronger holdup play.

Over the course of the match, Juventus created 7 shots on 18 total attacks. Four of these shots and eight of these attacks came after the 65th minute, and the tactical re-arrangements made by Antonio Conte.

1. Next Wednesday is not going to be easy. The resurgence by Juventus in the last 25 minutes will surely be a valuable lesson for them going into the second leg. I'm expecting one of the most exciting Bayern matches of the season, and this one was already a great match.

2. Arturo Vidal is the worst and so is his hair

3. As an FYI to the Fox Soccer director: When a player is being pulled off with a groin injury, don't try and focus on the groin because in HD the family jewels will ring out loud and clear through athletic shorts.