Going into this game at the Allianz Arena, deliberations abound concerned themselves with what the deciding factor would be in this series. Lionel Messi's fitness. Mario Mandzukic's suspension. Barcelona's fragility on set piece play. Could Bayern control any possession without Toni Kroos? Essentially all of those queries and discussion points were rendered moot by the end of 90 minutes as FC Bayern München performed the soccer equivalent of the Hulk smashing Loki around like a rag doll in The Avengers movie.

There are several key statistical and tactical points to be looked at in this first match of the tie that should provide illumination for the end of this tie next week at the Camp Nou in Barcelona. It really should be a very interesting battle as Barcelona comes out looking to gain some semblance of respect and dignity back from FC Bayern.

If you believe Tony Gale's narrative (which you should never do at risk to your own mental stability), Lionel Messi could have saved Barcelona from this embarrassment today simply if his holy toe fungus weren't a little dry, which is idiotically absurb. It completely ignores the fact that it wasn't that Messi wasn't fully fit, but it was also that FC Bayern spent the first 45 minutes of this game effectively marking him out of the match.To this end, Messi dropped deeper and deeper in the match to try to find the ball. This is a shot from about the 10' of play. 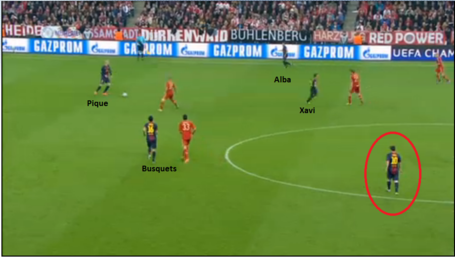 Messi in case you haven't figured it out is the short guy with the big red oval around him. This is Barcelona in possession and Messi is in his own half. Farther up field are Iniesta, Sanchez, and Pedro. That right there says everything about how effective Messi was in this game.

You could make a case that his hamstring injury still plagues him, and that's most likely true, but it ignores the fact that Bayern prevented Messi from being a factor higher up the pitch and as he dropped deeper to find the game, Barcelona's attack in the middle was effectively neutered, forcing it onto the wings where if you're anyone but Real Madrid, FC Bayern is going to eat you alive for breakfast. They did this, both on the attack and on the counterattack, for most of yesterday.

I could just say that headline and be done with it and I seriously will. These are the heights of Bayern's set piece player and Barcelona's defenders..

The headers in the box leading to the first two goals came from Dante and Thomas Muller respectively. In both cases these players were being marked by Dani Alves who is 6 inches shorter than either of them. You do the rest of the math.

A hallmark of this season has been the increased pressing that Bayern has incorporated into their game and yesterday was their most impressive display yet. The most impressive of the group was Thomas Müller whose harassment bordered on criminal as he literally ran everywhere on the pitch chasing the ball. Franck Ribery, Javi Martinez, Bastian Schweinsteiger and Mario Gomez all showed up with ridiculous displays as well. Simply put, here is the example of the press Bayern employed.

For those who like to count, that is 7 Bayern players pressing 9 Barcelona players and forcing Dani Alves to punt long with nothing more than hope to guide his choice.

However truly, the most remarkable display was thrown down by Javi Martinez who displayed exactly what 40 million looks like when it's turned into midfield battering ram. His physical supremacy absolutely overwhelmed Barcelona and really was a big deal in blunting their attack and movement in the center of pitch, in addition to his pressure and constant harrying.

Here are the attacking statistics for your perusal

A 4-0 anvil drop on Barcelona is about as close as you can be at the end of the first 90 in a UEFA Champions League tie to advancing to the next round. All it takes is 90 more minutes of stellar soccer, and we'll be seeing the big eared silver trophy on its pedestal for the 3rd time in 4 years late next month.