The Old Lady Falls: Bayern München Break Her Other Hip

FC Bayern plays the sponge, as Juventus makes tactical and personnel changes in the 2nd leg of the UEFA Champions League Quarterfinals. Despite their adaptation, Juventus fell 2-0 on the night and 4-0 on aggregate as Bayern München displayed their poise and class on the way to the semi-finals.

Share All sharing options for: The Old Lady Falls: Bayern München Break Her Other Hip

As the team that was thoroughly outplayed in the first leg, it made sense the Juventus would alter its game plan coming into the 2nd leg of their contest with Bayern Munich on Wednesday. As the team that thoroughly outclassed Juventus in the first leg, it made sense that Bayern Munich would relax its attacking posture with a 2 goal lead. The latter was true while the degree of the former was clearly not enough for Juventus as they were man-handled by Die Roten in a 2-0 win and 4-0 aggregate scoreline.

Antonio Conte made four main changes to his side from the week prior, opting for Mirko Vucinic, fresh off his shortless escapades of the weekend prior to pair with Fabio Quagriarella up top, and Paul Pogba to replace the suspended Arturo Vidal, who hopefully took the several hours free time this afforded him to get a haircut. The other changes were the substitutions made to the wingbacks as the suspended Lichtsteiner was replaced by Simone Padion, while the overmatched Federico Peluso was replaced by Kwadwo Asamoah at left wingback. It was already clear from the last 25 minutes of the first leg that Vucinic was a massive upgrade over Alessandor Matri and that was born out as Vucinic’s holdup play and drives at the Bayern backline earned multiple free kicks just outside the Bayern penalty area. Paul Pogba served excellently as the right center midfielder and was an upgrade over Arturo Vidal. Whether this was the result of more time and space on the ball than Vidal enjoyed is debatable, but he was able to enjoy more forays and drives down the right side than his predecessor in leg one.

While this statement definitely sounds like a strategy for powering through an eating contest at Buffalo Wild Wings as opposed to a soccer strategy, Juventus came into the match looking to blunt and stifle the Bayern attack down the wings. This strategy consisted of the wingback and a center midfielder, pressuring the advancing attacking midfielder on both of Bayern’s wings. This had the effect of slowing the advance and forcing the ball into the center of the park where presumably the numerical superiority of Juventus would allow them to challenge and either win the ball or force a turnover. This is born out as in looking at the game zone stats and realizing the second leg was a much more even affair than the first when Bayern marauded through the Juventus half. 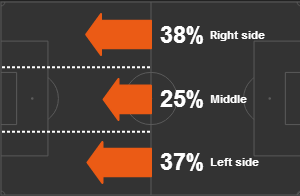 However, the ultimate end of this strategy was exhaustion. The near immediate pressure that had to be brought to bear on Franck Ribery and Arjen Robben to prevent their rampaging runs down the wings exhausted both the wingbacks and the Juventus midfielders. As the match wore on in the second half Bayern was able to put together continuous attacks down the wings that ultimately led to both goals on the night.

With a 2-0 lead coming into the game, Bayern sat deeper throughout this game and pressed with less intensity than they did in the first leg, content to let the success of their wing play dictate their attacks. The majority of this game was played in the middle of the park as Bayern attacks entered the attacking third less often as seen above. Their attack came mostly with the exhaustion of the Juventus wingbacks and midfield.

One very interesting thing to note is that briefly at the end of the game with Luis Gustavo and Claudio Pizarro on the field, Bayern shifted from their standard 4-2-3-1 to a 4-3-3 for a few minutes. That shift was accompanied an absolute evisceration of Juventus in the last 5 minutes as Bayern strung together 7 attacks and 3 shots on the Juventus goal in a 5 minutes plus stoppage time. There isn't much you can or should draw from this, as at that stage of the game, exhaustion and mental fatigue had set in for Juventus. It is however, something we should keep an eye out for in the future.

Ultimately, at the end of the evening Juventus was clearly the inferior side as Bayern München won comfortably., advancing to the semi-finals of the UEFA Champions League on the strength of their offense in leg one, their midfield strength in leg two, and their fitness in both legs. I'm sure Juventus has fitness in both their legs too, but hey, that doesn't help when your opponents breaks both your hips.