Bayern inflicted physical, mental and spiritual harm on Hamburg SV Saturday at the Allianz Arena by a final score of 9-2, earning three points and bringing them to within two points of clinching the Bundesliga title. While four goals and two assists from Claudio Pizarro is a very welcome sight from the team striking core that just before the international break was showing some trouble in the finishing department, it is clear he is not our first choice striker and, due to his age, probably will not be starting come Tuesday versus Juventus. Saturday's game statistics show a clear difference in class between the two sides, but they are worth looking at in the context of the defensive effort Bayern put in today.

As you can see from the stats, Bayern created twice as many opportunities on goal, along with massive penetration of the Hamburg defense, but this we already know when the final scoreline reads like a baseball box score (At least for Hamburg's sake, its doesn't read like a cricket score). What is more telling of how this game played out are the defensive statistics. Bayern won over 60% of all tackles in the match, both retaining possession well under pressure and winning possession. What really spells out the stifling of Hamburg was the elimination of Rafael Van der Vaart, Hamburg's creative attacking midfielder, from having much, if any, influence in open play.

While opinions on the efficacy of the aging Dutchman may vary, he is still one of the more creative midfielders in the world, and its speaks volumes to the quality of the Bayern defense and defensive midfield in their display today. While he did have 2 assists on the night, both came on corners, so his overall contribution from open play can be easily assessed. And that contribution should leave any Hamburg fan underwhelmed to say the least. Below is the pass chart from Van der Vaart's 90 minutes on the pitch, along with a table of the this graphic in number form. 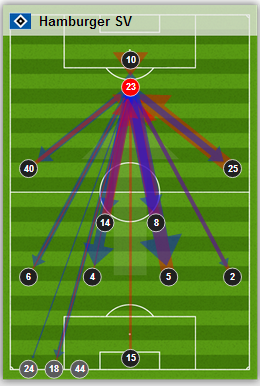 As you can see more than half of the passing to the Dutchman came to him as Hamburg's outlet, while almost 80% of Van der Vaart's passing went straight back from whence it came. The lack of a creative outlet, along with the sustained pressure from FC Bayern were enough to force errors and create turnovers for a Bayern team that demonstrated exactly what the term clinical finishing means.