Manchester City frustrated Bayern Munich all evening as the Bavarians cross-based gameplan was ineffective against the compact and structured Manchester City defense.

Bayern Munich opened up their sixth and final match of the UEFA Champions League group stage with a bang as they put two goals in quick succession past Manchester City. Those two early goals were a mask for the tactical issues that plagued Bayern Munich as the match progressed; issues that ultimately cost them the match. 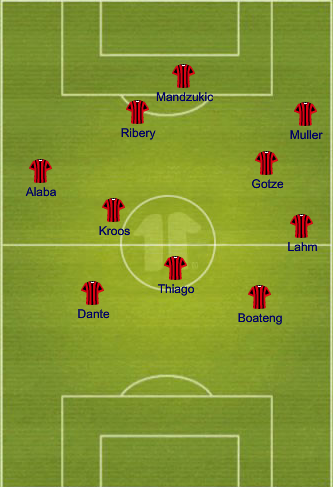 Bayern Munich started the first half in their standard 4-1-4-1 formation using Thiago Alcantara in the single pivot, Toni Kroos in the hybridized role, and Mario Götze as the false 10.  Unfortunately, the press of Manchester City pushed Thiago deep between the CBs which necessitated Toni Kroos dropping deeper to get into the game. In response David Alaba moved high up the left as Franck Ribery dropped into a supporting striker role behind Mario Mandzukic. This movement inside frequently left David Alaba completely alone on the left up against the speed of Jesus Navas.

Mario Gotze drifted right to work with Müller and Lahm. Ultimately, it was an attacking buildup designed to emphasize wing based play, bypass the very defensive holding midfield combination of Fernandinho and Javi Garcia. Even Bayern Munich have trouble breaking down teams through the middle with such defensive power.

The over-reliance on the cross 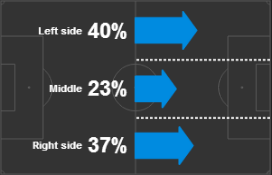 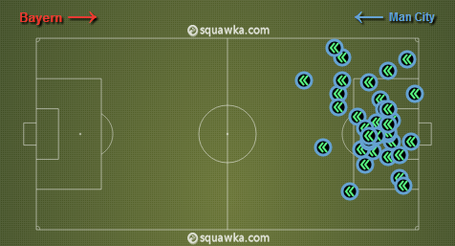 Ultimately, the effect of almost exclusively using the wings caused Bayern Munich to become almost completely reliant on the cross for getting the ball into the box. Bayern Munich attempted 21 total crosses in the first half of which only 4 were actually successful. They attempted a further 17 in the second half of which only two were successful. 6 total complete crosses of a total of 38 is really bad. The Manchester City defense completed 38 clearances on the evening, an absolutely astounding number only when not shown in the context of the ridiculous number of total chances they were given. Given that ineffectiveness It's no surprise that Bayern Munich were only able to generate 13 attempts on goal despite the nearly 40 attempted crosses.

While the crossing system led to a total of 6 shots in the first 20 minutes, it was clearly a lost cause afterwards as they earned only 4 more before the half and only 3 after halftime.

The Manchester City second half adjustment

Coming out of the tunnel in the second half Manchester City made a slight tactical adjustment, dropping from their 2-man press of the first of the first half into using Edin Dzeko as a single high fast press more in the vein of a 4-4-1-1. The speed of the press caused Bayern Munich to drop deeper as Dante and Boateng sought to maintain control of the ball. The effect was to stretch the field as Bayern Munich dropped deeper in response.

Stretching the field against the 4-1-4-1 is a fantastic way to open up spaces for wide attacking midfielders to play 1v1 against fullbacks. Adding in the ability to play off and work with David Silva is just icing on the cake and something Manchester City took full advantage of in the buildup leading to earning the penalty that leveled the match at 2-2.

Bringing in Javi Martinez for Mario Götze was a direct attempt to stop the midfield domination of both Garcia and Fernandinho by switching to possession based play through the center with Kroos and Thiago. While it was successful in breaking down Manchester City's stranglehold on the middle and moved Bayern Munich away from the cross they became very susceptible to the counter attack at they moved forward to support the possession based game. This was directly responsible for the third goal as Silva found a streaking Jesus Navas wide right. While all fault belongs with Jerome Boateng for committing what was certainly the blunder of the day, the attack was born out of Bayern's push forward and the fact that David Alaba was consistently alone on the left, leaving Navas with space to blow past him.

From that moment forward, Manchester City were content to sit back and defend as Bayern Munich brought on Xherdan Shaqiri as a striker. While at times Shaqiri interchanged with both central midfielders and both Frank Ribery and Thomas Müller pushed into the striker role, Bayern Munich moved away from the possession based attempt they had started just 10 minutes earlier and went back to ineffective crossing they had wasted a good portion of the evening attempting against an even more compact Manchester City defense. While the addition of Shaqiri gave Bayern Munich the possessive control of the match and really limited options for Manchester City, they were still unable to break down the defensive wall in front of Joe Hart's goal.

It was certainly a night fraught with problems for the European title holders and a clear example of a match that should have been a showcase for Bastian Schweinsteiger. The  transition from defense into attack through the center was a large problem all night for Bayern Munich given the physical way Manchester City imposed themselves on the match. Fernandinho committed a quarter of Manchester City's fouls on the evening and was aided by additional foul heavy totals from Pablo Zabaleta in shutting down Franck Ribery on the left and Edin Dzeko in shutting down Thiago Alcantara in the middle. While Javi Martinez was a great option that helped limit the damage being done, Bastian Schweinsteiger's defensive skill, coupled with his offensive skill, could have been the deciding factor on this disappointing evening.