Breaking down Mario Götze's brilliant pseudo-slalom and strike against CSKA Moscow that Bayern Munich up 2-0 in their 3-1 win.

His white kit blending into the snow falling around the Khimki Arena, Bayern Munich's Mario Götze produced what was probably his best goal of this season for Bayern Munich as he slalomed three CSKA Moscow and hit a wonderful curling strike beyond the reach of Igor Akinfeev. It was the second goal of the match for the Bavarians in their 3-1 away win over the Russians. 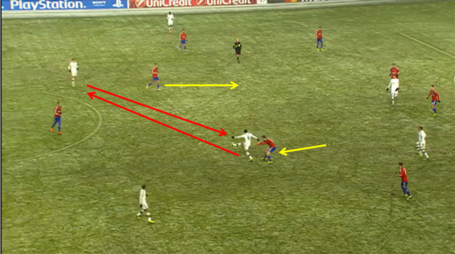 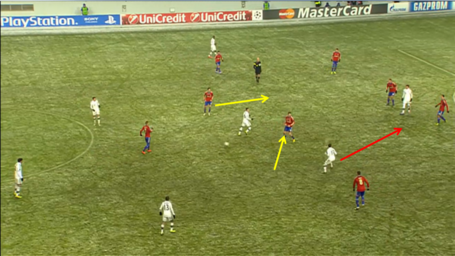 In the lead up to this goal, CSKA had deployed themselves in a standard two banks of four defense. Toni Kroos, pressured by CDM Georgi Milanov plays the ball into the feet of Thiago. The Spaniard, under immediate duress from Pontus Wernbloom, has no outlet other than to play the ball back to Kroos lest he lose possession. However, the immediate pressure from Wernbloom is a problem as Milanov is not yet made it back into defensive position. This leaves a rather large hole directly in front of the back four. Wernbloom, rather then simply retreating and allowing Milanov to pick up the run of Thiago is forced to track the Spaniard which allows Toni Kroos a free pass into the now completely unmarked Mario Götze that bypasses the first defensive bank. 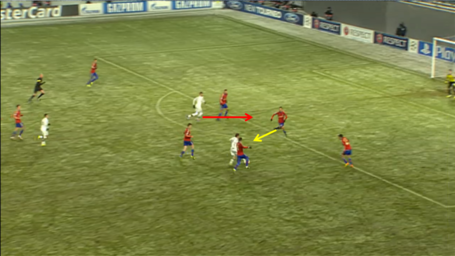 As Götze darts towards goal, he is challenged by the LM Steven Zuber. Unfortunately due to the space opened by Wernbloom tracking Thiago, he is caught both behind and non-goal side of Götze. This leaves Moscow CB Sergei Ignashevitch no choice but to step out and challenge Götze as the Moscow backline attempts to collapse. His partner Alexei Berzoutski however is dealing with a severe issue of his own as Thomas Müller who has been loitering with evil intentions begins a near post run cutting through the centerbacks. Now instead of covering for Ignashevitch, he is forced to abandon the cover entirely and track the runner opening a massive hole behind him. 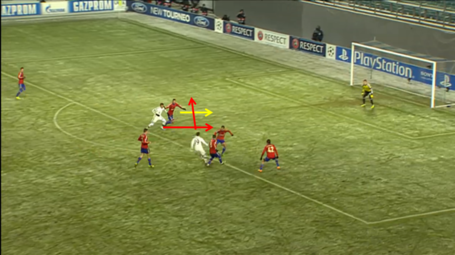 With a simple left cut, Götze extricates himself from the challenges by both Zuber and Ignashevtich and drives directly at Berezoutski who is stuck between tracking the run directly across goal by the very dangerous Thomas Müller or challenging Götze. Unluckily for him, he commits too much to tracking Müller giving Mario Götze the necessary space and time to produce a prodigious strike across goal to put Bayern Munich up 2-0.