Bayern Munich heads to the Westfalenstadion to face Borussia Dortmund in their first real competitive meeting of the season. So, what's different this year versus the team Bayern Munich wiped the floor with on three occasions last season?

Bayern Munich marches into the Westfalenstadion tomorrow for the second time this season,and for their first truly meaningful match against the Black and Yellows. It's definitely the biggest match of this young season and a barometer for Bayern Munich's chances at winning not only the Bundesliga, but the DFB Pokal and potentially the Champions League.

In die Roten's last visit to the Westfalenstadion in early August for the DFL SuperCup, they were soundly beaten by the Borussia Dortmund counterattacks to the tune of a 4-2 final scoreline. It was definitely an eye opener for Pep Guardiola in adapting to the Bundesliga and a lesson that the Spanish coach is still learning how to deal with even as the season progresses. Matches against squads like Hertha Berlin and Hoffenheim, who are the tied league leader in counterattacks with Dortmund, have been terse affairs rather then the dominant performances similar to that laid down in Gelsenkirchen. With those facts in hand marching onto Jurgen Klopp's pitch, even against a decimated Borussia Dortmund defense, Bayern Munich needs to be very wary.

In some ways, this Borussia Dortmund team is different from the side that made it to the Champions League final last season.  This season's side both counterattacks less often per match and enters the opponents final third with an average half a pass less than last year. A lot of that is down to the influence of their new CAM, Henrik Mkhitaryan, in his role as a more classic #10 compared to the false 10 role Mario Götze embodied for die Schwarzgelben. 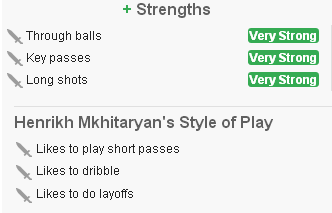 Their €30M Armenian summer addition is definitely a different breed, yet shares quite a few characteristics with the departed 20-year-old. While Mario Götze's shines when operating with small passes, working with a partner, and putting them through on goal with quick combination play, Henrik Mkhitaryan is more along the lines of a classic #10, with the ability to pick out long range passes and putting the runners in on goal. One of Mkhitaryan greatest assets though is his ability to also function in tight spaces, as well as in that long range role, which explains why Borussia Dortmund was willing to splash the cash to add him to Jurgen Klopp's arsenal.

The real danger from Dortmund this season has been the continued evolution of Marco Reus. Many Dortmund supporters would be happy to tell you that Reus has been relatively out of form to date this year. Yet so far, he has been the main lynchpin of the Dortmund attack contributing nearly four key passes/90 and together with Mkhitaryan being the main creative offensive forces for Jurgen Klopp. That coupled with his form doesn't bode well for all the other Bundesliga teams as the season progresses. Luckily for Bayern, they catch him when he's not quite so dangerous.

The key for this match is going to be limiting the opportunities for both those players. It's important to note in context that saying you're going to attempt to corral and contain Marco Reus is similar to saying you're going to try to lasso a tornado. It takes being Pecos Bill if one's going to succeed. Mkhitaryan is going to be more of a tactical challenge, especially when utilizing a single pivot against a squad using Nuri Sahin as the deep lying playmaker. Sahin likes to get forward and directly influence the attack more then many of his counterparts. Adding him into the attack alongside Mkhitaryan is going to pose problems for the lone holding midfielder on defense, especially during transition play.

One of the main differences between last season's Borussia Dortmund and this season's has been the reduction in pressing actions. PAPPA, or passes allowed per pressing action, is a defensive metric outlined here that defines the defensive fitness of a team. It's two fundamental components are interceptions and tackles and each tells us something about how the side defends relative to other sides. When we use it to compare a team to itself over different samples we can see changes in Borussia Dortmund's much touted, and admittedly very fun to watch, gegenpress is actually not quite so gegen this season. Dortmund allows nearly 2 extra passes per pressing action this season as compared to the entirety of last year. The simplest explanation would be that this season is a small sample size concern and that the rate hasn't stabilized. If that were true, the rate would change for any 12 game sample set taken during last season, but 12 game sets from last season show only slight deviation from the mean, not a wholescale change of nearly two passes passes per pressing action. Dortmund defend differently this year and are actually slower to commiting to winning the ball.

This is good news for Bayern Munich whose emphasis on retaining and recycling possession this season, which has lead them to rack up goofy possession percentage numbers, is going to be a strength against Dortmund. Coupled with a slowing Dortmund press, Bayern's ability to move the ball is going to translate into Dortmund traversing greater distances to maintain their defensive style. If Bayern can effectively control the pitch and move their pieces around with the clockwork precision we've seen from them in the last few weeks, they should be able to exhaust the entirety of the Dortmund squad with relative ease.

All in all, this is Bayern Munich's match to win. Corraling and containing Marco Reus and limiting the exposure of the single pivot are going to be their main concerns for preventing Dortmund from executing their offensive gameplan, but Bayern Munich's gameplan on offense is as simple as go and kick the ball around, which they shown an at-times-coma-inducing ability to do this season.