A review of the Bayern Munich Annual Meeting

FC Bayern München AG were incredibly successful on the pitch last season and in the accounting books. But just how successful?

Share All sharing options for: A review of the Bayern Munich Annual Meeting

For the 21st consecutive year, FC Bayern AG were a profitable company, and this year they posted a record turnover of €432.8M, a 15% increase over their previous record high in the 2011/2012 fiscal year. 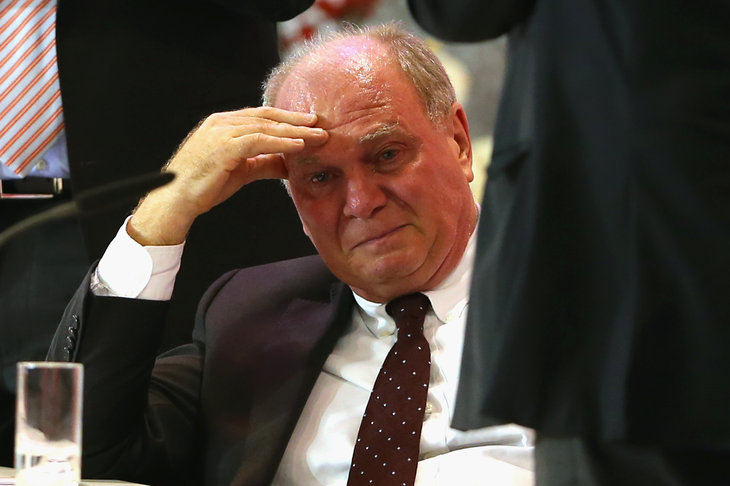 An emotional Uli Hoeneß addressed the crowd at the annual meeting about his legal issues.

While some of the evening was given over to Uli Hoeness and his highly charged - and highly emotional - address on his upcoming trial on charges of tax evasion, the board released their full financial report which came with much more positive results for the Munich giants.

Not bad for a team valued by Forbes at just over €1B and the world's 5th most valuable football club in April 2013. In case you've forgotten, that was two months before they won the treble.

The most important part from our perspective as Bayern Munich fans is the absolutely absurd amount of equity that this team has. Most football teams in the world are highly leveraged with the intent of putting enough talent on the pitch to make a run at, and sustain, the lucrative revenue stream of the UEFA Champions League. Juxtaposed to that is the fact that Bayern Munich have the equity and financial resources to basically buy an entire team of Mario Götze's. It going to be a fun few years with this team and this core of players knowing that Bayern Munich are going to have the financial resources to keep all those that wish to stay and win yet another treble (or two).