Understanding the 4-1-4-1: Guardiola's vision in defense and the importance of the high press

An examination of the fundamentals of Guardiola's 4-1-4-1 in defense and how this team is different from the treble winning side of a year ago.

Share All sharing options for: Understanding the 4-1-4-1: Guardiola's vision in defense and the importance of the high press

Previously we've endeavored to understand what exactly this new system Bayern Munich from Bayern Munich functions. The 4-1-4-1 is basically a subtle evolution out of either the 4-3-3(4-1-2-3) or the 4-2-3-1 from your perspective. Since in Bayern Munich's case, they're transitioning from the 4-2-3-1 used under Jupp Heynckes to this new system of Guardiola's it would theoretically bear more hallmarks in terms of wide play on defense with the previous incarnation then your standard 4-3-3. Instead what we see is that Pep Guardiola has come in and fundamentally altered Bayern Munich's defensive shape and retained virtually none of the features of Heynckes defensive positioning. Towards reaching that understanding let's first delve into Bayern Munich's defensive positioning last season.

The Heynckes Bayern in Defense 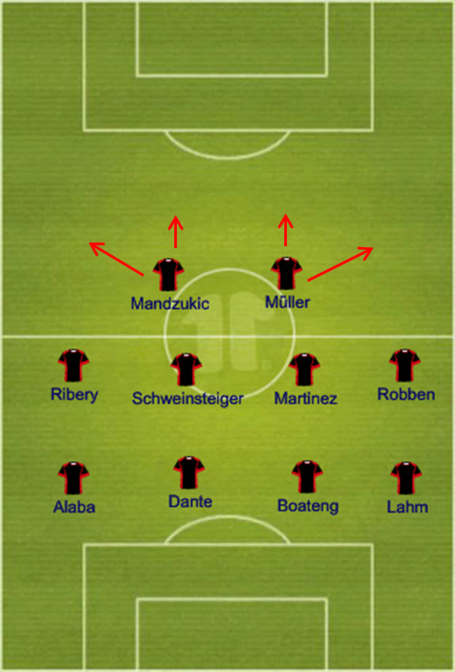 Jupp Heynckes fundamentally lined this team up in a very conservative two banks of four with 2 pressing forwards.They were defined by patience and the ability to rapidly transition from offense to defense. The fundamental starting point of Heynckes' system was to reform and solidify the defense. In many ways it was the stereotypical German counterattack side on defense using the indomitable rock of Javi Martinez only in this case buoyed by two of the best two way players on the planet in Thomas Müller and Bastian Schweinsteiger. Heynckes fundamentally required his wide midfielders to play with width and rarely used them in the press, opting instead to use the CAM, be it Toni Kroos or Thomas Müller, alongside the striker. In many ways that was what earned Franck Ribery the UEFA Best Player in Europe award as Heynckes required him to play defense and evolve that portion of his game.

The brilliance of Heynckes' press only really came alive when Toni Kroos went out injured in the home leg to Juventus and Thomas Müller paired up with Mario Mandzukic in what was the pressing equivalent of an Energizer bunny hopped up on on meth and PCP. The team used the forward combination to great effect while sacrificing virtually nothing in defensive shape. That allowed this team to become the nearly harmonious machine they were on defense at the end of last season. Rather then forcing the play wide with the press, they used the fundamental skillset of their strikers to harass and slow the opposition, isolate players and force other teams into disadvantageous situations where Bayern's overwhelming numbers in defense almost guaranteed a turnover of the ball.

The Guardiola Bayern in Defense 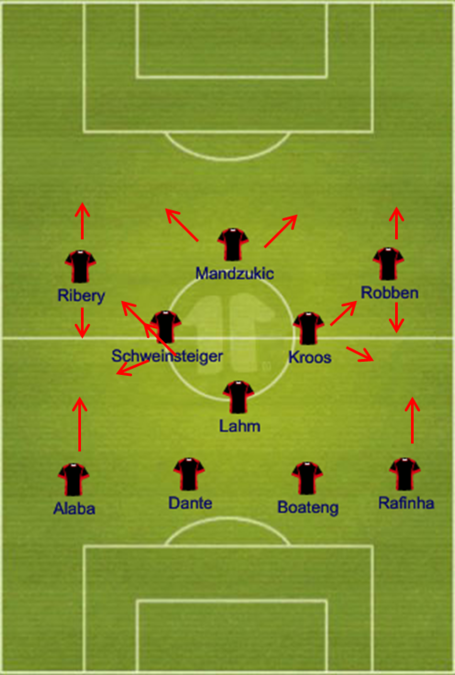 Like Guardiola's Barcelona, his Bayern Munich squad are based around a three forward press and a variant on the archetypal 4-3-3 pressing strategy.The entire intent is to win the ball back as quickly as possible. A very different strategy from Jupp Heynckes time at Bayern. To that end, Bayern employs a 3-man press with a 3-man supporting midfield line. The main feature that Guardiola uses different from the archetype 4-3-3 in defense is that the midfield does not play with a flat line. The two attacking CMs plays advanced of the lone holder (single pivot) and themselves are directly involved in the forward press. In many ways, Bayern Munich presses with 5 men which is audacious to the point of near insanity because it leaves so much space for other teams to operate in when in possession. The press has to be total and complete before the opposition has the chance to exploit holes in the positioning. 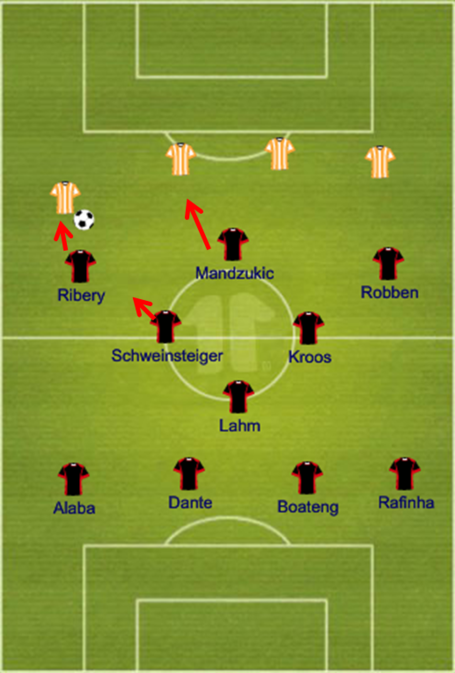 The true genius comes from the high mark and press of the fullback who pushes forward, arresting forward progress and harassing the opposition wide midfielder while the center mid commits to the press.The Bayern Munich wide midfielder prevents backward progress while supporting and pressing should the need arise. 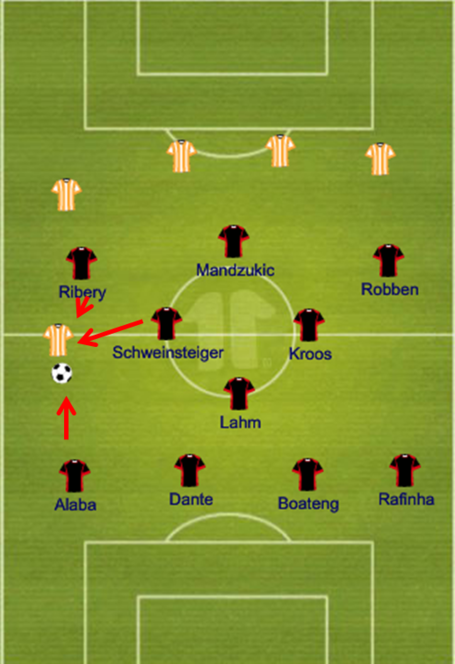 The defensive structures reliance on the press makes Bayern Munich overly top heavy and very susceptible to the counter which depending on your point of view could either be viewed as a) a measure of Guardiola's confidence in this defense b) a tactical blindspot or c) utter lunacy. Bayern (and Barcelona before them) are successful with it in normal buildup but suffer when the opposition immediately bypasses their attacking midfield and are knocking at the defense's door. With Barcelona, the weakness was exacerbated by the deficiencies inherent in their defenders (little aerial presence, lack of speed, lack of physicality). Once teams were on the counter many of the common skills required by centerbacks to arrest the counter were in shortly. Bayern Munich doesn't have these deficiencies so there ability to respond to the counter is greatly enhanced over Barcelona.

Reconciliation of The Two Systems

That's not to say Guardiola's system is wrong. It's just different. Heynckes system had flaws in that it overwhelmingly relied on a few key players to work tirelessly for 90 minutes and relied on the other 8 to operate in mechanized precision. For Heynckes, it worked flawlessly because he had Thomas Müller who I'm pretty sure ran out the womb and hasn't stopped running since. It could have just as easily failed had the strikers dropped like flies, unable to cope with the intense pressing required of them.

Guardiola's is the opposite, depending on correct spatial positioning and every player pressing at one point; almost like an acutely applied acupressure. Every player operating independently, yet with coordinated patterns.

In many ways, the systems are the two extremes; Rigidly controlled and self-expressive-almost-to-a-fault. From that perspective it makes sense it took this team two months to play non-shambolic defense.