On Wednesday, Bayern Munich played host to the Czech champions Viktoria Plzen at the Allianz Arena. The game was complete domination from start to finish as Bayern ended the match with 34 shots to Viktoria's zero. Despite that absolutely lopsided performance, Plzen looked in the game until a 64' minute counterattack goal off the restart following the second goal from Franck Ribery absolutely demoralized and destroyed the Czech team. That goal is the subject of this installment of the goal breakdown. 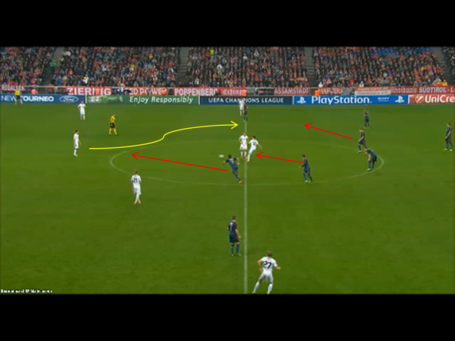 Coming off the restart in play, Bayern were up 3-0 and Plzen were looking for the quick goal to begin to salvage something, anything. They started by playing it back into Tomas Horava for his first touch of the match. He came under immediate pressure from the left in Mario Mandzukic. The Czech opted to retain possession dribbling forward into what was already shaping up to be a Bayern trap. The Mandzukic press leaves no way for Horava to move left so he darts forward on the left into a waiting cavalcade of Bayern bodies already moving in that direction. 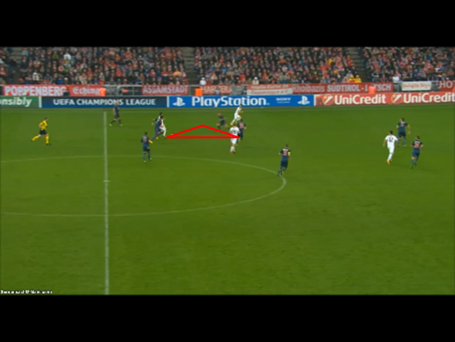 As Horava charges forward, he increasingly loses control of possession as Mandzukic challenges him. Meanwhile the Bayern net closes as Kroos cuts off possession to the middle while Robben and Götze cover any attempts at reversing and playing back. A heavy touch from Horava gives Rafinha all the incentive he needs as he charges in with a sliding tackle that strips the ball from the Czech's control completely and out to Arjen Robben. Even without Rafinha's tackle, Bayern wins this ball simply due to numbers on the press. 5 men pressing 3 will always win the ball back. Perhaps not immediately, but they will win it back. Even more so when the press is as dynamic as Bayern's. This immediately catches the majority of the Plzen squad on the wrong side of the ball as Bayern begins their attack. 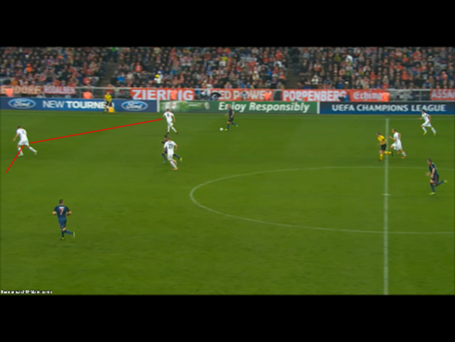 As we can see the Plzen defense is a bit shambolic yet still relatively intact. Bayern has a 3 on 5 counterattack which is very sustainable should Plzen play it smart which to the most extent they do. As the left back Limbersky is caught up the field, he opts to withdraw as the play unfolds with the intent of reforming his defensive line and cover, which is exactly what he should do. The sole CDM left from the double pivot puts Mario Götze non goal side of himself, marking him appropriately. The important concerns at this juncture for Plzen here on out are going to be how they handle reforming their midfield line while dealing with the locomotive force of Bastian Schweinsteiger at full sprint that is bypassing their midfield reinforcements. 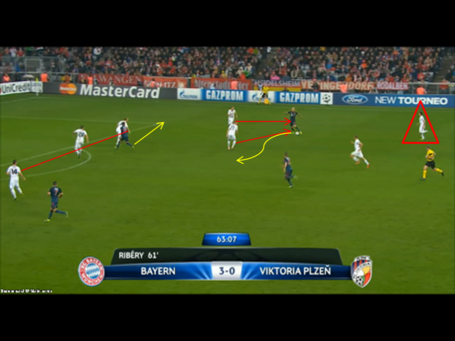 As we approach the box, Plzen has already reformed it's back defensive line as Arjen Robben cuts in on his left foot. Limbersky tracks him and Prochazka steps out to press and double team preventing the pass to Schweinsteiger and forcing Robben to reset the play and end the counter. Robben instead sees the run of Götze along and picks out the 20 year old with a pass on the outside wing. While Horava and Kolar are in full sprint to return to their compatriots on the defensive, and perhaps atone for his terrible error to start the play in Horava's case, their 60 yard sprints are going to end up costing them in a minute. 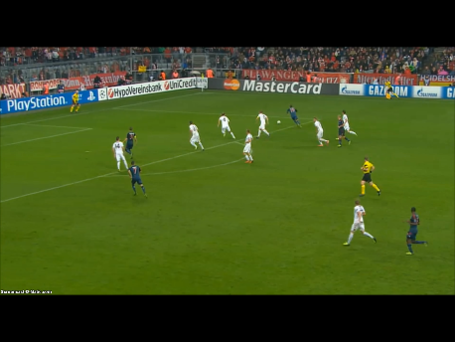 As Götze picks up the pass, Schweinsteiger has completed his faster-then-a-speeding-bullet routine by blowing past the Plzen defense and actually ending up offside. 'Atta boy Bastian. The turn from Götze is met by an alert Limbersky and the Plzen back line completely reforms while the midfield lines is coming back into shape. In some ways, Plzen are almost out of the woods, stopping a very dangerous counterattack from Bayern, but their next few choices are their undoing. 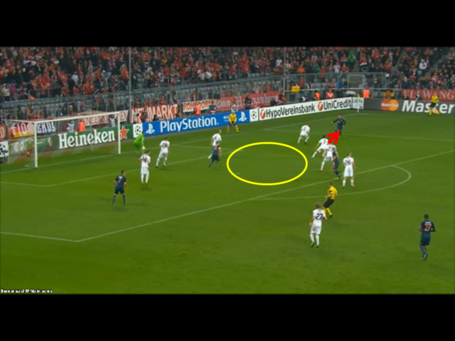 Limbersky marks and sets up to play Götze towards the by-line, attempting to force him into an easy cross for a clearance or to turn and recycle possession. However, Götze cuts back, and with the still reforming defensive line, Limbersky challenges Götze with the intent to disrupt the cross. Only problem is now  the space behind his centerbacks is exposed. Ideally, Horava should step out to cut down the passing lane and force Götze to recycle possession, but having just completed a turnover and a 60+ yard run, what's one more error for good measure? He allows Götze the time and space to wait for Schweinsteiger to find room to receive his ball. 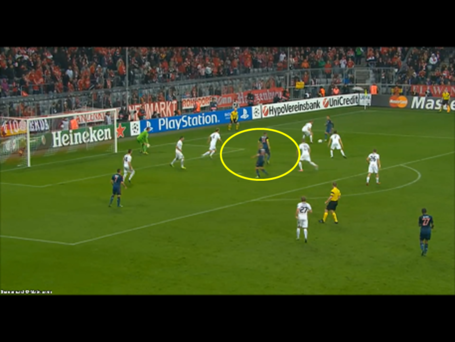 Ultimately, the final play is just an amalgamation of errors as CDM Vaclav Prochazka decides to showcase his potential future as a statue leaving the attacking midfielder Daniel Kolar to attempt to defend while the covering centerback has a thought process that probably ultimately ended in "whoa, there's just like, not enough space". While no one could probably have foretold that Bastian Schweinsteiger would execute a world class collect, spin, shoot that should make Cristiano Ronaldo "super jelly", Plzen did almost everything right in this entire sequence of play until they just  completely fell apart at the end. This was an exhausting counterattack for Plzen, and it completely broke their spirit as they basically went through the motions for the remainder of the match.