Good afternoon to all, hope everyone is enjoying the winter break. Several items to consider on this cold January afternoon:

- Most importantly, FC Bayern just finished off Qatari champs Lekhwiya Sports Club in a friendly. Bayern won by a 4-0 score-line, but it took a while for the offense to get on track. Bayern went into the half with a 1-0 lead, as Lekhwiya got a little physical in their defending. But we were able to turn on the jets in the second period. Some video highlights:

- Mario Gomez was held out after twisting his ankle yesterday. I was anxious when I first heard this, because I know it was an ankle problem that led to his surgery this past fall. But it turns out it's the opposite ankle, and it looks like he'll be able to resume practice by Monday.

- Grudnik has sponsored a winter transfer talk Fanpost - you can see it here.

- There's a great article on the team's official site about the 4 guys from the reserve side who are training with the senior club in Qatar. The article focuses especially on Pierre-Emile Hojbjerg (whose name I may have spelled wrong in the past - sorry), the 17-year old Dane. But Weirauch is also in Qatar, and I think he's going to be a force for the senior side someday as well.

- As you may have seen, SB Nation has put the sites through a few minor upgrades over the past couple weeks. These were not nearly as big as the upgrade that happened in October or whenever, but the FanShots and FanPosts should be easier / more prominent, and the color scheme will hopefully look a little less imposing. You can check out details of the new scheme here, and some questions regarding the mobile experience will be answered (maybe?) here. 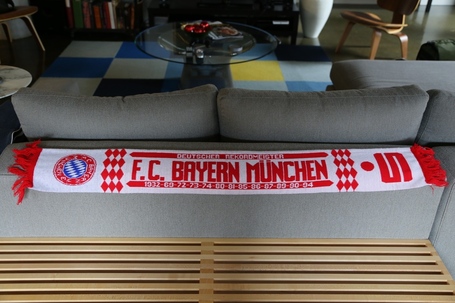 Anyone else have a great piece of Bayern attire / memorabilia? If so, send them to bayern.offside@yahoo.com and we'll post what we get.

We're less than 2 weeks from the 2d-half restart. Thanks for reading.